Bridging the integrity gap: CALM and a new era of purpose-driven partnerships

The shift in consumer attitudes, not technology, is the most profound shift in marketing with significant implications for brands.

The role of purpose in marketing was put under the spotlight by Simon Gunning, CEO of the Campaign Against Living Miserably (CALM) in a thought-provoking panel at #BITELIVE19.

Gunning said the charity is working with other organisations to “disseminate hope”. “That’s our product, that’s what we make,” he explained. Sentiments that served as the poignant start to a conversation that lifted the lid on how to balance creativity, commerciality and integrity.

Gunning was joined on stage by Cherie Cunningham, Head of Marketing at UKTV, Jim Shearer, Marketing Director at Molson Coors, Mat Goff, CEO of adam&eveDDB and Rebecca Fennelly, Head of Brand and Communications at JOE Media.

We operate and very much intentionally operate as a commercial brand, one that has an altruistic output and a very serious reason to exist.

Hope forms the backbone of CALM, an organisation founded in 2006 as “a movement against suicide,” as Gunning explained. “We operate and very much intentionally operate as a commercial brand, one that has an altruistic output and a very serious reason to exist.”

This altruistic focus has seen CALM partner with several other companies all aligned in their desire to do good things for a wider societal cause. What Gunning is quick to point out however is that each campaign the organisation runs is “a piece of brand communication, one that has real resonance and real power with target audiences.”

This was evident in the Effie Grand Prix winning campaign Project 84, made in partnership with ITV, funded by Harry’s Grooming and creatively led by adam&eveDDB. Creative work which was the result of a collective of people and companies that all banded together to give people hope. For, as Gunning said, “Hope and human contact is the thing that can bring people back.”

When it comes to brand communication, this hope must be translated to an audience in an authentic way, one that remains true to each brand partner. Fennelly spoke about the power that media companies like JOE can have when it comes to communicating those messages authentically. She explained, “It’s less so about traditional demographics and more so about reaching people with all sorts of mindsets and backgrounds.”

As a social first media platform, Fennelly spoke about the assumption people make about a younger audience that they have short attention spans. For Fennelly, “they are incredibly switched on, socially, culturally, economically, environmentally more switched on than probably any previous generation. And because of that, you have to earn their trust and I think that’s a good thing.”

Today’s audience are discerning and have no qualms about calling a brand out for inauthenticity. This was something that Carling, as the UK’s number one beer brand for 30 years, was distinctly aware of when they launched their long-term brand positioning, Made Local. As Shearer explained, “There’s no shortcuts, there’s no shoehorning of emotional territory for a brand just because there is a socially purpose topic that people might care about. Because I think that feels really thin and if you haven’t got the goods to back it up then you’re in trouble.”

Shearer also highlighted the fact that the average age of the Molson Coors board has gone down by twenty years over the last ten, meaning that “you’ve got a boardroom of people that are of a generation that inherently cares more.” He said this was essential when it came to launching the new positioning as the brand realised, “we couldn’t put our head in the sand any longer because not being relevant in a purposeful way to consumers was becoming very apparent that it wouldn’t allow us to have a sustainable business in the future.”

There’s no shortcuts, there’s no shoehorning of emotional territory for a brand just because there is a socially purpose topic that people might care about.

Part of developing true and authentic campaigns for the brands and for CALM in turn, is by engaging the communities they work with and in turn championing them. This was at the heart of Carling’s Made Local activity, which as Shearer outlined, “is somewhat under the radar as a real-world activity but we decided to shine our light on it through advertising this year. Effectively it’s investment into communities and championing and celebrating local communities that are finding unusual, interesting, unexpected and really impressive ways to make the most of where they’re from.”

From funding football clubs to building youth clubs, Shearer says the strategy “comes from a place of real humility” because the communities supported have, in effect built the brand.

Engaging a brand’s community is something that Cunningham says was essential when it came to the success of Dave’s partnership with CALM, Be the Mate You’d Want. After initial concerns that their audience might not engage with it, Cunningham says in fact they wanted to hear more: “It seems to be sweeping the nation that people want to see all of society reflected back at them.”

Dave gave over entire ad breaks to CALM, encouraging viewers to reach out to one another and to friends in need. An investment which paid off, for both the channel and CALM, as Cunningham explained, “Normally in an ad break you see roughly a 20% dip in people watching. The reality is that in the ad break takeovers that we’ve done, we’ve seen three times as many people come in to watch the ad break.” She noted that in 20 years of advertising she had never seen anyone ever specifically tune into an ad break. “Brand is important but just giving a bit of a shit is more important,” she added.

Each of the marketers on the panel stressed the importance of engaging directly with their audience, of speaking to and reflecting what they want back to them. This is something that Goff was quick to reflect on as he examined the rate of change within the industry: “If you looked back ten years and said how much is advertising going to change over the course of the next ten years, we would’ve all talked about the technology…Yes that has changed and there has been some disruption there but the change in the mindset of the people that we’re advertising to is far more profound than the way that they’re consuming the media put in front of them.”

It seems to be sweeping the nation that people want to see all of society reflected back at them.

When brands choose to care about a purpose larger and more socially orientated that simply selling their product, it needs to echo the internal values. Goff spoke specifically about an agency’s role in crafting and communicating this purpose authentically, of ensuring that “whatever is put out into the world in the end connects and has authenticity behind it.”

Cunningham echoed Goff’s sentiment as she acknowledged that purpose aligning with brand values matters to the audience. “We know it’s important to the people we’re speaking to so it’s important to us,” she added.

For Goff, there is a very real danger of brands getting it wrong, as he explained, “Some people want to make purposeful pieces of communication and what you can very quickly end up with is a big gap in authenticity between the communication that they’re making, what people see their brand as already, what their product is and then how their business behaves.”

For the agency working alongside a brand, it’s their responsibility to step back from the brief, says Goff, and take in the broader picture, from audience to product and the brand’s business itself. From there, he added, “Our job as an agency is to try and stitch as much together as possible.”

The change in the mindset of the people the we’re advertising to is far more profound than the way that they’re consuming the media put in front of them.

The power of collaboration

Ultimately, the panel championed the power of collaboration. From adam&eveDDB’s ongoing creative work to Dave’s Be the Mate You’d Want and JOE Media’s partnership, each had worked alongside CALM in some capacity, recognising that their values aligned.

And it’s these partnerships that can make a real difference when it comes to speaking up and out about issues that matter. Goff added, “If more media owners, and more agencies and more clients and brands can shine a light on some of the issues that people are facing then society as a whole starts to deal with those better.”

Fennelly spoke about how JOE discerns real purpose and genuine brand authenticity from a brand that is simply purpose-washing. She believes that as a media partner, they have become extremely adept at spotting those brands who simply have a “tick-box attitude”. But, she says, the brands that are approaching them are now coming with a different attitude: “What we’re seeing more and more are the ambitions, the very authentic, exciting ambitions of brands who genuinely want to make a difference. And they’re starting with how they can be better rather than what they can do, and I think that comes from a much more wholesome place.”

Shearer spoke about the dangers of misinterpreting what the word purpose actually means. For him, it’s not Molson Coors’ purpose that has changed: “Our purpose is to keep the stories going. But the thing is, the insight about our consumer changed and the stories we therefore want to encourage them to have and for us to be part of have changed.”

For Cunningham, part of the collaborative approach that Dave is taking is both partnering with other organisations but also engaging directly with their audience. She explained that Dave’s aim is to make sure “that we’re moving in the right direction for the future and to make sure that we are a gender-neutral channel that can be felt to be open to all. Movement on that just involves us talking to our audience all the time.”

From engaging with their audiences to partnering with one another, the marketers on the panel highlighted the realities of striving to create authentic purpose-led communications. Ultimately, it comes down to how much you care, not just about connecting with your audience, but with your employees and the wider cause you choose to support. Shearer put it best as he said, we’re “always trying to find ways to use the privileged positions we are in as brand owners and powerful businesses to deploy that care.” It’s that privilege that we as marketers need to recognise, understand and ultimately use to help bridge the integrity gap in purpose-led communication. 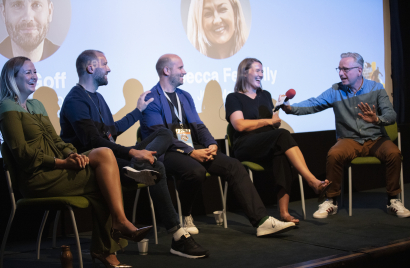 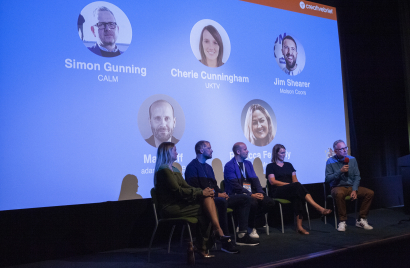 Friends of the Earth taps into our eco-anxiety

When it comes to the environment, young consumers are facing up to a very real fear: eco-anxiety, that feeling of helplessness in the face of a global crisis.