MSQ’s Young Lions Annalise Valentino and Emma McKernan on how the Climate Crisis and the myth of inclusivity impacted their Cannes experience.

It was always going to be fun to see how part two of our Cannes Lions diary would differ from part one. The best feedback we received from our first instalment, which was written halfway through our first experience of the festival, was how refreshingly optimistic it was. That it was nice to see that Cannes could still inspire new generations of creatives.

(Actually, the best piece of feedback from part one of our diary was Cindy Gallop personally thanking us on LinkedIn after we wrote about her amazing talk. That made our year, let alone our festival) 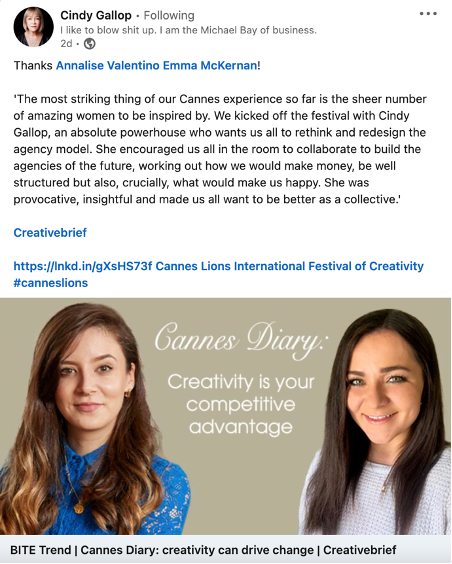 The second half of the week has been more of a reality check. But that’s nothing to do with the quality of the work we’ve seen, the experiences we’ve had or the discovery that it can actually rain in Cannes. In fact, the reality check has perhaps been the most important and inspiring thing of all…

The world is fucked. And we need to do something about it.

We’re at a festival with some seriously famous people, ridiculously cool parties and where bright, shiny awards are being handed out every night. And yet our favourite part of the whole thing was spent in a random and really quite basic corridor. We really do bring the glamour.

But it was here we found the Great Ads for Good exhibition, which told the story of two decades of responsible advertising. We lost ourselves in these incredible campaigns that inform and raise awareness around societal issues.

Of course we were aware that a lot of these issues existed. And we were aware of some of the campaigns. But we don’t think we comprehended the breadth of topics or the nuances in which some agencies around the world are tackling it. From a very striking breast cancer ad from Mozambique to an intricately designed campaign for Sanlaap in India to stop human trafficking, to a female equality ad from the United Arab Emirates to a harrowing ad from Norway raising awareness that 1 in 5 children in the country had experienced violence in the home, it was an hour that completely stopped us in our tracks.

There was an element of ‘if the world is this fucked, what are we doing at Cannes?’. It was hard not to check yourself and realise how privileged you are. But mainly it inspired us to go and do better work for good.

We’re not naïve – we understand the commercial side of what we do, and we know that a lot of what’s discussed as ‘purpose’ in our industry is quite rightly called out as bullshit by our generation. But this exhibition showed us that there can be a lot more to it. That through great creativity, we can actually create change. 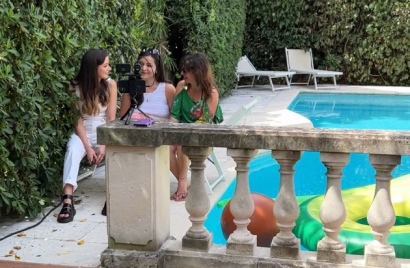 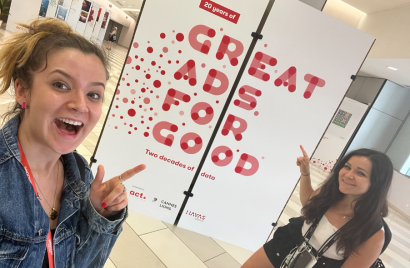 Be a bitch, if it helps you get to the standard that you want

There are so many ways we can be more inclusive. And we all need to do much, much better.

Reality check number two: we went to a lot of talks about inclusivity each day, where the great and the good of the industry were telling us the importance of being so inclusive. And then we’d go out in the evening and we couldn’t get into any Cannes parties because they were also so exclusive.

Is that us being flippant, or is that a microcosm of the industry still showing just how far it needs to go? Perhaps making hundreds of small steps is the only way to make the inclusivity leap the industry needs. Issa Rae was inspiring to hear on this subject – she pointed to the example that if a hairstylist wants to work in our industry, a black woman would be taught to work on all sorts of hairstyles, whereas a white woman may not.

And she said she still has to turn down jobs all the time because the crew is all white, and had to come to realise her own power to be able to do that. She told the audience how she  mandates that all of her sets are at least 60% diverse. Her advice to anyone afraid of taking such a stand was clear: “be a bitch, if it helps you get to the standard that you want”..

Finally, from a more personal point on view, as Young Lions we were lucky enough to be interviewed by the Gerety Awards, whose judging panel unites the most brilliant women in our industry and celebrates advertising as a whole (not just advertising aimed at women) through a female lens.

What we loved most about being interviewed by Gerety – along with the fact that the interviewers’ two interviews during Cannes week were with us and Sir Martin Sorrell – was that we were asked about ourselves as creatives, not about ourselves specifically as being about female creatives. It prompted a discussion between us about how often we see creatives, peers, director rosters etc that only ever include women when it’s for a female product. As the approach Gerety rightly takes, we want to continue to make sure that women are front of mind for every campaign – not just those about tampons.

And that’s perhaps where it’s best to end. Because Cannes isn’t just about the mind-blowing excitement and inspiration it’s given us this week, it’s about encouraging us all to take those feelings forward for the rest of the year too.

I know we will. In one mad sensory-overload of a week, Cannes Lions has truly shown us the type of work we want to be doing, and the way we want to do it.

Read the first instalment of Annalise and Emma’s Cannes diary to find out more about how creativity can drive change here.

Puzzle pushes for greater inclusion through use of alt text

LEAD 2023 to focus on a collaborative recovery

The Advertising Association, the IPA and ISBA’s annual flagship industry summit will commence on January 25th

At Most Contagious Hellmann’s defends its purpose based strategy