The creative industry has a moral and business responsibility to address the lack of disability inclusion, something Caroline Casey explored on stage at #BITELIVE19

“The truth is, inclusion is so goddamn hard. Diversity and inclusion is so difficult to do. It’s actually a war of identities.” Caroline Casey, Founder of The Valuable 500 closed #BITELIVE19 with an impassioned, rousing keynote that argued that labels should be for packages and jam jars, not individuals. That people make choices, and in turn, choices make culture.

The Valuable 500 is a year-long campaign, launched by Casey at the World Economic Forum Annual Summit in Davos this year. The campaign aims to get 500 businesses to commit to putting disability inclusion on their leadership agendas. And for Casey, it is the creative industries that are critical in bringing about this real-world change.

[We need] to change the way business sees disability so society will as well.

There are 1.3 billion people in the world with a disability. But they’re being ignored says Casey; their spending power isn’t even being acknowledged. The problem is that there is an assumption made that the only people thinking about diversity and inclusion are those who work in those roles, whose day to day focus is on furthering that agenda.

The reality, says Casey, is that D&I people are “overwhelmed with these competing agendas…Where they’re going to go first is where the loudest noise is.” A state of play which means disability inclusion often isn’t considered.

For Casey, it is the creative industries that can shout that loudest, and that can “express how society is, to tell the truth.” She praises the recent work of AMV BBDO who created the #DIVERSISH campaign for The Valuable 500. The campaign demonstrates, with humour and creative edge, the tick box approach some business leaders still take when it comes to addressing diversity and inclusion.

As Casey says, “That film is the truth.” She believes in the energy of the industry and the people who work in it to bring about change: “For me the creative industry, the people who look after brands, the agencies, the communication, you are my energy. I owe you all so much. You’re the truth tellers, the imaginers, you’re the people that can fix this issue of only 4% consider disability.”

Disability has always been on the side-lines

That 4% figure relates to the reality that, while 90% of businesses claim to prioritise disability inclusion, only 4% actually do. For Casey, “What’s happening in business is reflective of what’s happening in society.”

She pointed out that we design more clothes for dogs than we do for people with disabilities. The industry serves its canine friends better than the 13 million people with a disability in the UK, who have a combined spending power of £249 billion. Casey wants business to recognise this powerful potential: “The crisis exists but the opportunity is even bigger.”

She urges businesses to stop side-lining disability while other parts of the D&I debate are prioritised. Casey believes that “There’s no hierarchy for inclusion or exclusion,” and she wants businesses and their leaders to recognise this.

There’s no hierarchy for inclusion or exclusion.

Casey pointed out that we are in fact all “temporarily abled”. We will all be disabled at some point. She highlighted a piece of research that EY conducted for The Valuable 500 that revealed 7% of CEOs have a lived experience of disability.

It’s these business leaders who have the means to bring aboutreal change because, as Casey explains; “We all dance to the tune of the leaders.” Up until now, she believes, we haven’t had the leadership in this space. What The Valuable 500 aims to do is note a truth, that we need “to change the way business sees disability so society will as well.”

The Valuable 500 invites a collective of businesses to sign up and commit to “an intention to change the world”, to put disability on their list. Casey sees being part of the collective as “a brand differentiator, the untapped one. Who’s going to be the early adopter, the pioneer?”

She has seen 304 brands sign up so far with the movement already being supported by global leaders including Paul Polman and Sir Richard Branson as well as global brand and agency leaders such as Virgin Media and Omnicom.

For Casey, she wants to see “a complete remarket, a complete rebrand of disability.” Speaking about the TED talk she gave in 2010 in which she revealed she had been registered blind when she was 17 but concealed this fact until October 1999.

Casey is spearheading an inclusion revolution within business, working to bring about a global shift in business inclusion to ensure everyone can live their lives without limit or label. To do this, she says, she is putting her bet on the broader creative communications industry, “the courageous, creative collective." 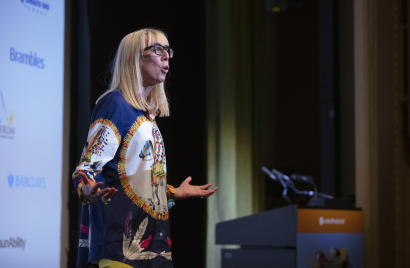 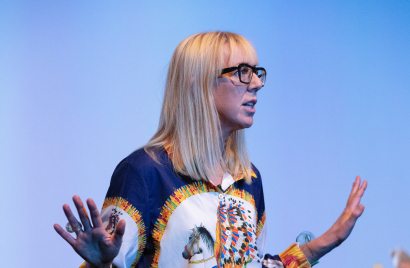