adidas has successfully showed the power of thinking local, with a new campaign taking over Glasgow and trolling England by using graffiti on an outdoor ad to announce that: “It’s coming hame”. 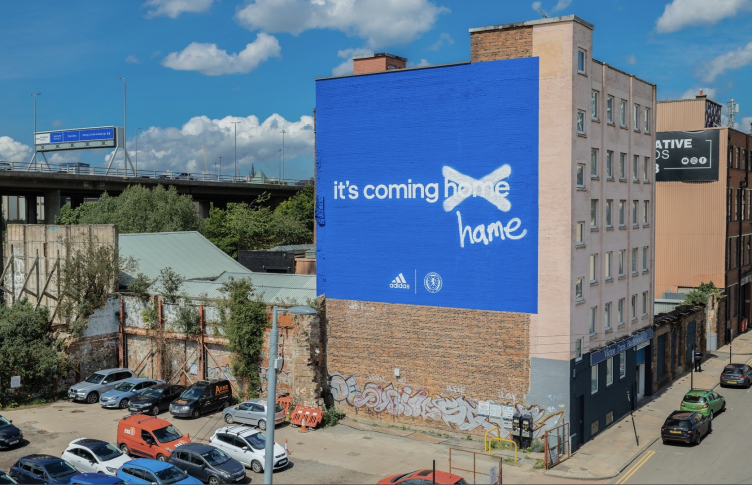 adidas make Scotland’s kit. Nike make England’s. So to get Scotland fans hyped for the Euro’s, we worked with Glaswegian graffiti artist @SprayPrince to troll England by giving their famous anthem a Scottish twist.

Billboards across Glasgow have been drenched in Scottish blue, with Glaswegian artist Spray Prince (@sprayprince) called in to tag the phrase around the city.

Sharing an image of the campaign in process on his instagram (@sprayprince) he shared that he was “bringing Scottish swing to advertising”.

Graffiti artist Spray Prince is well known in Glasgow. Also known as Jefferson Ferris, he graduated from Glasgow Clyde College in 2016 and specialises in street art and illustration across the city. He has a passion for Graffiti and as explained to Glasgow Live he wants to make it more of an ‘acceptable art form’ and change the stigma that is often attached to it.

A shift he explained is already in progress: “People’s perceptions of graffiti are changing. Just look at all the murals that are in Glasgow or how many graffiti tours operate in Berlin – it’s becoming part of a city’s culture as people become more accepting of it.”

This year’s marketing campaigns for the Euro’s were a long time in the making. European’s football’s governing body postponed Euro 2020 for a year because of the global pandemic. The postponement provided a chance for European leagues that had been suspended to be completed.

While good things come to those who wait; hitting the right tone with the Euro’s in the wake of a global pandemic isn’t always easy. (Just ask the beer brand attempting to promote a ’stadium in a box’ as a way to generate at home Euro excitement.)

Yet these playful ads successfully deliver the hype ahead of Scotland's first Hampden Park game on 14th June, and healthily up the tension before their showdown against England four days later.

The local-first aspect of the campaign is also of note. For while ‘glocal’ has been a somewhat clumsy, but nonetheless accurate description on the way in which global brands have historically executed campaigns on a local level, in the wake of the global pandemic smart marketers are reappraising the role of local communities in local marketing executions. A shift which makes the combination of a local artist and a global campaign a winning combination, regardless of the result on the pitch.