Nationwide's new 'PayDay SaveDay' campaign uses an unusual new voice to challenge behaviour and get us thinking about an issue that none of us want to talk about.

We live in a society that’s become ever more focussed on living in the moment.

Whether it’s a FOMO or a YOLO that drives you, the focus is on now, rather than what happens tomorrow. From social media shortening our attention spans, to the instant gratification of a bit of retail therapy, we see this playing out across modern life. Even within our own industries, sales and marketing have become increasingly focused on making short term gains, often at the expense of the long-term view.

It would be easy to think that it’s always been this way, yet not so long ago, Britain took more of a long-term view, especially when it came to money. Popularised by the thrift societies of the 19th century, saving became something of a national past time. To scrimp and save was a badge of honour, a means of safeguarding personal finances from unforeseen events, but now that culture has changed and the habit is dead. People still talk about saving, but it’s more often framed around the idea of saving for something rather than saving because it’s good practice.

The erosion of this tradition has left Britain with a savings crisis. The government’s Money and Pensions Service (MAPS) recently found that more than 11 million people have less than £100 in their savings accounts. People are saving a decreasing proportion of total income, while spending more on their day-to-day living. Over the last decade, the average portion of household incomes saved each year has slipped from 11.1% in 2010 to 5% in 2018, the lowest it’s been since 1963. This leaves a sizeable portion of the population ill-prepared to deal with even the smallest financial shock; an MOT failure or a boiler break down could be enough to push them into serious financial trouble.

Nationwide was founded by ordinary people coming together to accomplish something they couldn’t alone. In the early days, this meant helping people afford a home, which it continues to do to this day. But it also harnesses the collective power of its membership to change society for the better. Concerned by the decline of savings behaviour, Nationwide tasked VCCP with the job of helping re-establish the habit. We quickly recognised that if we were to address the problem, we would need to take an unusual tact for advertisers and go against the prevailing culture of living for the moment rather than with it.

Most people weren’t closed to the idea of saving; generally speaking, people know it’s a good idea. The problem was that they didn’t believe they could do it. Even those planning to save, or those on high incomes found that they had nothing left by the end of the month because they’d spent it all.

Yet research from MAPS found that saving is possible for people from nearly all income brackets, with 1-in-4 of those with household incomes less than £13,500 holding at least £1,000 in savings. We also found that 40% of the country were able to save something each month. So if it wasn’t a question of ability and people thought it was a good idea, why weren’t people saving?

The key was putting structure in place. Those who routinely saved were able to save 80% more than those who haphazardly put money away. Armed with this, our task was clear: we needed to give people who don’t think they can save anything the confidence that with the right approach they might be able to save a little something every month.

To do this, we needed to introduce a saving structure that was memorable and easy to adopt. With this in mind, we arrived at the idea of making pay day, save day. Pay day is a well-recognised occasion that happens at roughly the same time each month for most of the working population. When teamed with saving, it acquired some cognitive dissonance - most people think about splurging when they get paid - and crucially, it helped us expose a compelling truth: there’s a reason we tend to pay our bills at the beginning of the month soon after we’re paid; it helps us budget for the rest of the month.

Seeding this nugget of financial wisdom requires great tact and sensitivity. It would be easy for our advice to backfire if it were deemed preachy or judgmental. At a time when household income is squeezed, people certainly don’t want to be lectured about saving more.

We needed to take a fresh approach and avoid some of the tropes of the category. Too often, well-meaning brands resorted to publishing lists of tips people could adopt to transform their financial well-being, which only made people feel worse because they were too rigid to work with people’s real money lives. The job for communications was first to recognise the problem before offering up a helpful solution that was easy to adopt.

Our ‘Voices’ campaign had already shaken up the dry financial services category by giving a voice to real people. Where we had previously used poetry and other forms of spoken word to reflect on the challenges people face in their lives, the new campaign turned to a new, unlikely voice: stand up comedians.

When it comes to ad campaigns, stand up comedy doesn’t have a great track record, but we seized on it as the ideal way to bring PayDay SaveDay to life. Live comedy has a unique way of disarming even the most serious subjects, teasing out truths that we can all identify with. We knew that nobody likes talking about saving, so comedy gave us a way to broach the subject, allowing us to laugh together about how bad we are at it.

With this new ‘voice’, we were able to tackle a topic none of us want to think about, talk about or engage with, and make us look at it in a whole new light. Going against the grain and changing the way we think about saving will take time, but Nationwide’s PayDay SaveDay campaign is a bold leap towards making a nationwide behavioural change. 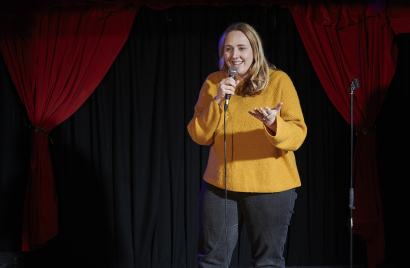 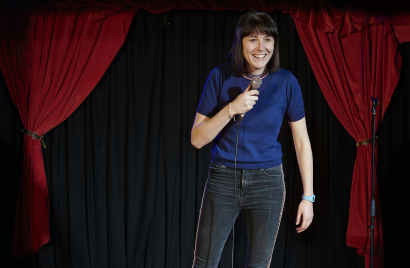 Ross Nicolson is a Senior Planner at VCCP. He started his career at Euro RSCG New York, and has since worked in strategy roles at Lowe, JWT and VCCP, delivering global campaigns for the likes of Unilever, Reckitt Benckiser, Shell, Johnson & Johnson, and Rolex, as well as iconic UK brands such as OXO, Cadbury and Nationwide. In a previous life he wrote a PhD thesis on the politics of youth in the United States.

DICE launches to improve diversity at conferences and events

All-white 'manels' are often still the norm at industry events. But DICE, launched today, is setting out to change this by introducing a 10-point charter to improve diversity and inclusion across industry conferences and events.

Are marketing careers becoming more Squiggly and what should the industry do to adapt to the end of linear careers paths?

In an era in which creative people have the tools and the inclinations to create their own paths to success and happiness, business as usual is no longer an option.

Uber Eats brings a little moment of joy to the everyday

‘Bring It’ reminds us to embrace the moments in life, however small, that can make you smile embodied by a charismatic courier delivering food with a side order of positivity.