The Conversations from Calais project is capturing conversations that would otherwise go unheard; giving a voice to people who, more often than not, aren’t given the space to have one.

Located in the north of France, the port town of Calais housed the ‘Refugee Jungle’ thought to be home to over 7,000 migrants according to a census from L' Auberge des Migrants/ Help Refugees in 2016. While the site was torn down later that same year by the French authorities, according to the project Conversations from Calais, there are still around 1,500 displaced people living on the site, trying to seek asylum in the UK.

Conversations from Calais aims to document conversations between volunteers and migrants in Calais through a serious of posters available for free download from their website. They are inviting people to print out the posters and paste them around their cities, to make use of public space to share these conversations with the world.

“Re-humanising the refugee crisis,” is the project’s aim, something that media coverage all too often forgets to do. The stories are agonising, heart warming and devastating to read; from volunteers playing football with young migrant children to hearing stories about the countries people have fled, the food and families left behind or the passions shared. What is at the heart of all of them is that, as human beings, we all long for the same things: warmth, safety and a little bit of kindness.

Conversations from Calais is capturing conversations that would otherwise go unheard; giving a voice to people who, more often than not, aren’t given the space to have one. They are removing the need to create polarising images of the refugee as either hero or hopeless and instead demonstrating that everyone is human; everyone shares stories about what seem to be the biggest and smallest parts of life.

The posters have been put up in 50 cities across five continents so far, from the UK to Portugal, America and Australia and the organisation’s website offers five ways people can help: be kind, be open, be political, be active and finally, be generous.

The power of the posters and the stories they convey lies within their simplicity; the words are enough. 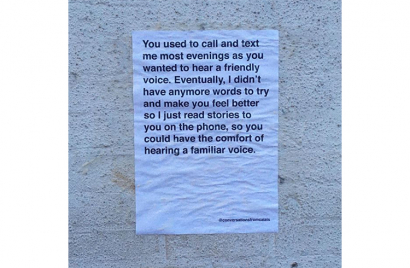 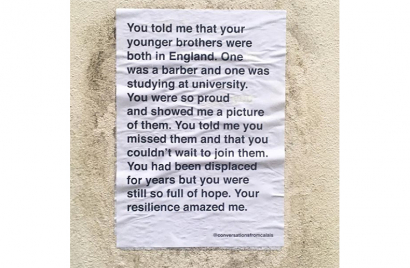 Women are the perfect, and to date hugely overlooked, audience for electric vehicles. But, as Erminia Blackden, Strategy Director at ENGINE asks, will manufacturers realise this in time?