In an era of few certainties; British consumers’ commitment to caffeine is a rare consistency on the embattled high street. 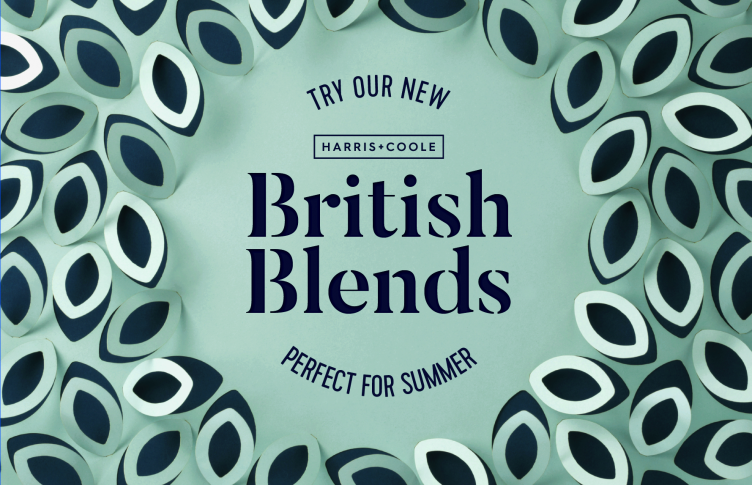 Harris+Hoole wanted to present a quintessentially British aesthetic to help launch their new menu inspired by this great island. Using hand cut paper craft to create backdrops, and drawing reference from the flora of Kew gardens, the design presented a fresh side of summer.

In an era of few certainties; British consumers’ commitment to caffeine is a rare consistency on the embattled high street. Following 20 consecutive years of growth the UK coffee shop market is now valued at £10.1bn across 25,483 outlets, according to Allegra World Coffee.

In fact according to research conducted by the London Coffee Festival, there will be more coffee shops than pubs by 2030, with three new shops opening every day and, by contrast, between 21 and 25 pubs closing down each week. But, in an increasingly homogenised coffee marketplace, how does a brand stand out?

The answer is to create thoughtful, tactile branding that aligns directly with your product. For Harris + Hoole’s summer campaign to launch the shop’s new quintessentially British menu, CellarDoor looked to Kew Gardens for inspiration, developing abstract patterns from nature to create brand prints. The paper craft imagery takes the shapes of buds, leaf formations and blooms.

The prints were rolled out throughout every Harris + Hoole coffee shop while in flagship stores 3D posters were created with the cut leaves physically raised from the print. The campaign is embracing the evolution of café culture, as the coffee shop supersedes the pub as the epicentre of social hubs and community.

Starbucks famously created the concept of the coffee shop as the ‘third space’ between work and home. Yet to gain consumers’ attention, brands such as Harris + Hoole must continue to evolve not just their physical retail space, but how they connect with consumers. Distinctive, visually inspiring branding such as this will be vital to ensuring that consumers see Harris + Hoole as a distinctive space to recharge and caffeinate.