How to thrive (not just survive) in the always-on marketing ecosystem is a key challenge for marketers. In a targets-driven, service led environment, prioritising self-development, the talent that compromises the industry’s biggest asset, is not easy. Yet with a revolution afoot in the workplace, with five generations working side by side, the old-style of hierarchy and command and control leadership is no longer fit for purpose.

Hosting a workshop on strength, Sarah Ellis, Co-Founder of Amazing If and Strategic Client Director at Gravity Road, urged the audience to spend 80% of their time improving their strengths. She explained, “People who are great, work out the things they excel in and then over invest in those things.”

The event comes as the team behind Amazing If, Ellis and her Co-Founder Helen Tupper, publish their first book, The Squiggly Career. As Ellis explained, the idea for the book came from the reality that people aren’t working in a linear way anymore. Only 6% of people in the UK workforce actually work 9-5. As Ellis said, “We are expected to be more agile and comfortable with ambiguity, to be more squiggly.” This is the sweet spot of ‘The Squiggly Career’, affording people the opportunity to “Ditch the ladder, Discover opportunity, Design your career.”

The workshop directly focused on how identifying your strengths can help you to thrive. For Ellis, there are three steps to cultivating that strength. Step one is to discover what you are great at and ask yourself what your strengths are. The second is to practice using that strength and increase the frequency in which you use it. The final step is to raise awareness and ensure other people know what it is you are great at.

People who are great, work out the things they excel in and then over invest in those things.

Craft a job around your strengths

Ellis explained the importance of ‘job crafting’, of working with your manager today to establish how you can work more with your strengths. “Don’t be afraid to think about the small changes you can make in current job,” she added.

Assessing the lack of feedback across many businesses, Ellis urged business leaders to deliver strength-based feedback, pointing out that a “praise sandwich” never works because you only ever remember the bad comment that was made.

When it came to practical takeaways for the audience, Ellis pointed to “the three Ws”. First up was deciding what strengths are you going to invest in. Next was to establish “what you want people to say about you when you’re not in the room? What do you want people to say when they recommend you?” And finally, she iterated that while it’s easy to sit in a room and feel inspired to change, she invited the audience to write down one action they’re going to take this week around their personal development. She urged the audience to say it out loud and remind yourself of it continuously. 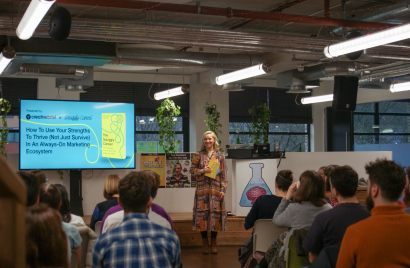 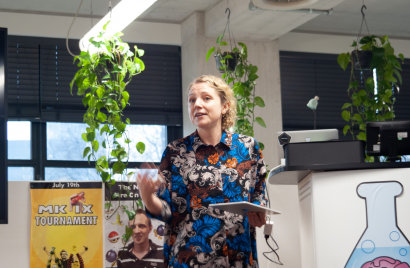 Focus on your own light

Ellis’ workshop was followed by a panel discussion chaired by BITE’s Managing Editor Nicky Kemp to delve into how individuals and organisations can thrive and build their strength in the workplace. Grace Kaye, Chief Strategy Officer at Brainlabs, shared how she entirely switched roles to better suit her strengths.

Ali Alvaraz, Head of Creative at Just So, spoke about the traumatic head injury she suffered that left her having to learn how to do everything again from scratch. Her own career story, which spanned agencies including The Brooklyn Brothers, before freelancing, followed by leading the creative charge at Just So, underlines how the most interesting and fulfilling careers are rarely linear. Her grounded advice to the audience of “go with the good” underlines the importance of prioritising personal relationships, culture and people when making career decisions.

Matt Cook, Brand & People Lead at Gravity Road, explained the importance of identifying “your unique way of seeing the world.” He spoke about the fear that many creative agencies have of structure, that “it might take us away from our magic.” However, he argued that the industry must look at structure as it “needs to look at how workplaces are structured so that they support everyone,” from returners to people who work part time or who are experiencing mental health issues.

Jo Hagger, Global Marketing Capabilities Director at Unilever spoke passionately about the impact of the marketing industry’s ‘always on’ working ecosystem. She shared her belief that “everyone is complicit in this entirely fake way of working.” She believes that there is undue pressure piled on agencies that need not be there. Speaking eloquently on the importance of flexible working, she shared how she has frequently defended her decision to leave work at certain times and work certain days. She pointed to the fact that employees should take up companies flexible working policies without apology.

Amazing If’s Ellis also touched on the often-ignored issue of the power of being an introvert, sharing how she sees being an introvert as one of her strengths. She believes that people assume only extroverts should be leaders, when in reality, extroverted leaders just happen to be the ones we hear about most.

The event underlined the necessity for both workplaces and individuals to step up to the possibilities afforded by The Squiggly Career. For Ellis this workplace revolution has to come not just from business leaders but must be lived and breathed by middle management. She cited Moneysupermarket.com as an example of a business doing just that; allowing people to “work your way.” Her hope is that the “companies that thrive and do the best will attract the best people.” 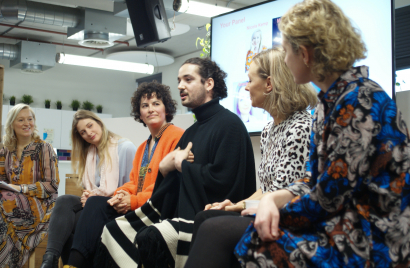 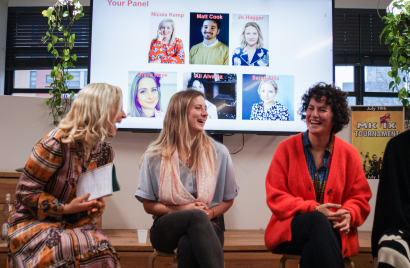 Squiggly advice for the modern marketer

A selection of advice from industry leaders taken from The Squiggly Career:

Amelia Torode, Founder, The Fawnbrake Collective - “No one cares as much about your career as you.”

Sara Bennison, Marketing Director, Nationwide - “If you have a career that is not 9 to 5 in its expectations, don’t make the mistake of dropping to four days a week. You will be paid 20% less for the same amount of work. Find other ways to create the mix between work and home.”

Caroline Casey, Founder, The Valuable 500 - “Own your mess-ups as much as your wins. And know that failure is where the magic happens if you are willing to see it. But above all else – be yourself.”

Alex Cole, CMO, BUPA - “You can really stand out and change things in a shitstorm. So look for problems and be part of their solutions.”

Tom Tapper, Co-Founder, Nice and Serious - “Find a new role that ignites childhood curiosity within you again, as it’s through an inquisitive mindset that we learn new things, which keeps us interested and interesting.”

Helen Tupper, Co-Founder, Amazing If - “Run your own race.”

The Squiggly Career is out now, published by Penguin and available from your local bookshop, or Amazon. Also available in audio.

For other Squiggly resources, follow @AmazingIf on Instagram for daily career tips or listen to the Squiggly Careers podcast.