Creativebrief: As founder of Amplify what is your primary focus?

Jonathan Emmins: As Founder, my primary focus is to be the ‘creative and strategic inspiration for Amplify and our clients’ – which all sounds a bit grandiose. In reality, that means I run the creative and strategy team alongside Dan Minty, our Strategy Director. This keeps my focus firmly on our client business, ensuring not only the quality and diversity of our work, but also that we remain forward thinking.

Creativebrief: Please share a para on your career to date – specifically talking us through the high points.

I studied ‘politics of race and sub-cultures’ at Warwick University, as well as running dance nights and the snowboard club. I then ran the entertainment arm of the NUS, before looking after clients such as Orange and PlayStation at experiential agency Making Waves. It was here that I met a number of Amplify’s senior team.

After becoming Partner at Making Waves I set up the Australian office. When I returned to London I became creatively frustrated, seeing a bigger opportunity to use experience as a comms platform. That was the acorn that became Amplify.

A personal highlight, was making the ‘FanCulture: the Evolution of Influence’ documentary.  The short film explores the role fans could, and should, play in brands and marketing. The film was a key turning point for the agency resulting in us significantly growing our international client base, and a good example of practicing what we preach.

Jonathan Emmins: I firmly believe the people and the culture we’ve cultivated at Amplify is second to none. One of our founding principles was to always be a “creative home for people and clients”.

The team has a wide variety of traditional and non-traditional backgrounds, bringing different outlooks, experiences and passions to ensure our campaigns are ideas based first, channels second. The benefit this brings to clients is that we’re second to none in communicating on the level and making meaningful connections, joining the dots between people, brands and culture.

"I'm equal parts geek and hedonist – with a love of people, culture, creativity and collaboration"

Creativebrief: Who are the people new to you (either within your business or externally) who have particularly impressed you in the last twelve months?

Jonathan Emmins: Spending a good part of the start of this year interviewing people really rammed home what a talented bunch the UK marketing industry is.

Whilst always striving to be the “best not biggest,” we’ve used our success to invest in the most precious asset of all, talented people. The team has grown in the last 12 months, with 16 new additions.

Emeka McQuade cut his teeth at Cake and Borkowski, and most recently was Associate Director at Three Monkeys. As GAD with responsibility for communications and social he’s already making a real difference broadening our approach, including some great work with Activision.

Beyond that we’ve ensured our work is fresh, unique, and avoided developing a house style by growing and collaborating with Amplify X, our extended family of 280+ (and rising) partners. They’re all brilliant, but Danny Miller and the team at Human After All definitely deserve a shout out as they continue to inspire and amaze me. Every time I grab breakfast with him I leave brimming with ideas.

Creativebrief: What has been your agency’s best work in the last year?

Jonathan Emmins: That’s like asking ‘which of your children do you prefer?’

Launching PS4 at the end of 2013 was pretty epic. That journey took us from major announcements at E3 in LA and Gamescom in Cologne, to create a pop-up members club for media and a preview experience for 250k gamers in Paris. In London, the PS4 Lounge opened its doors for gamers including Tinie Tempah, Dizzee Rascal and Amir Khan, before a tour of 170 retailers across the UK.

Then there’s innocent who challenged Amplify to remind people why they initially fell in love with the brand and to share their story with a new generation of fans. We created innocent inspires, a platform to tell the innocent story and share their values:  taste, health, ethics, creativity and entrepreneurialism. To support this, an experiential strategy with sampling at its heart was devised. The key was to deliver samples to new consumers in ways they wouldn’t expect.

Converse is a great example of Amplify doing what we do best, building on audience insight. Rather than tell the audience what they should like, we run an influencer campaign called ‘Young & Laced’, and they tell us. It’s a collective of young 16-24 urban, creative talent that help us understand the consumer on a much deeper level. It provides 360 insight into this hard to reach audience. 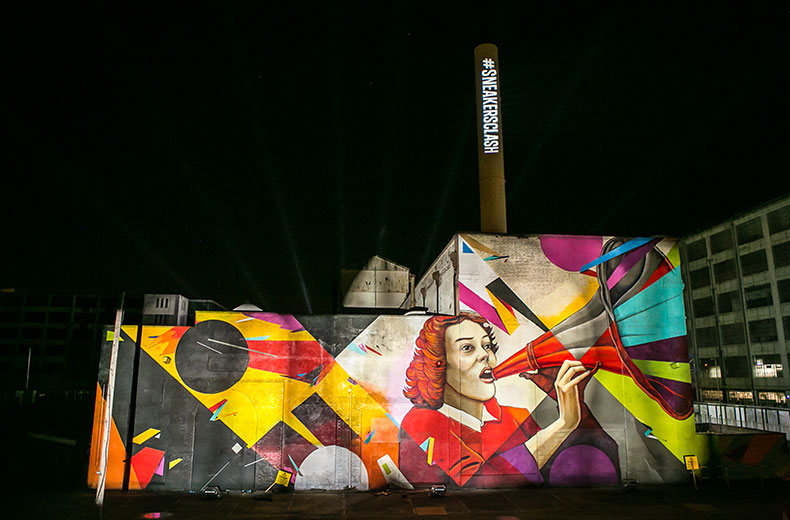 Creativebrief: How do you stay in touch with the industry’s best work and culturally relevant news?

Most recently we’ve been astounded by the young talent we’ve worked with during the aforementioned CONS Project: LDN, from artists to musicians, skaters to cultural-entrepreneurs.

Creativebrief: What work or agency from outside the UK do you think is particularly influential?

Jonathan Emmins: In terms of agencies R/GA continue to be phenomenal, with their execution every bit as on-point as their ideas. Brand wise Dove remains a firm favourite, despite being a seemingly unusual choice for Amplify. Dove has found an ownable territory built on an insight that works as well globally as locally, and stayed true to that regardless of execution. It would be great to see more FMCG brands seeking inspiration from this.

Creativebrief: What do you think are going to be the main challenges for agencies in the next two years?

Jonathan Emmins: There’s no such thing as challenges – only opportunities.

Change keeps us excited. As the lines continue to blur we see creative technology as a focus, enabling online and offline to fuse evermore seamlessly.

Content keeps us on track. Bombarded with messages, a clear and simple brand narrative remains as important as it ever was. Audiences will look for experiences, individuals and associations to find trusted short cuts to the information they need.

Creativebrief: What’s your attitude to the ‘traditional’ pitch? Do you think there is a better/more modern way?

Jonathan Emmins: It really depends how that pitch is run, the quality of the brief and the access you have to the client.

We have found that a lot of the pitches we’ve won recently, answer a different question to the original brief set. That’s where I think Amplify have both added value and put some clear blue water between us and the competition.

Some briefs are so narrow that they mask the original problem/opportunity. For us as an agency to do our best work we need to able to take a step back and ask questions. This requires access to the client. If appointed it would be unlikely you would work in isolation from the client, so it seems strange that sometimes that’s the case in a pitch. Without that chemistry it is unlikely that either party will deliver their best work.

"Some briefs are so narrow that they mask the original problem/opportunity. For us as an agency, to do our best work we need to be able to take a step back and ask questions"

Creativebrief: What’s the best pitch you’ve been involved in?

Jonathan Emmins: It’s always the next one, I still love the thrill of a pitch – a condensed period of analysis, insight and creativity. I guess the common traits of best pitches are a client who really understands their audience (or is happy to be shown), is willing to be brave to cut through and that along the way a relationship and mutual trust is formed.

Creativebrief: In what ways do you think the industry can change for the better?

Jonathan Emmins: I guess the two key areas for Amplify are creativity and audience understanding – both are inextricably linked.

With creativity it’s the dual responsibility of client and agency to create the time and space for open-minded and lateral thinking. For client it’s about giving the brief in sufficient time. For their agency it’s about making best use of that time to get creative, and craft simple, insightful and elegant solutions that explore new options and territories.

Key to this is understanding the audience. We’ve all come across those cartoon character type pen-portraits of “target consumers” accompanied by Getty watermarked stereotype faces. They’re so dilute and general there’s limits to how useful they are. We see Amplify’s role as getting under the skin of that audience, to meet, understand and empathise with the real them.

More so than ever before consumers are searching for brands that share their beliefs, values and outlook. They want to create, participate and have conversations. They want brands that think, talk and act like people. They want personality, not faceless companies.

Creativebrief: What’s the next big thing for Amplify?

In the last 12 months Amplify have pushed ourselves and our clients harder than ever before. So to a certain extent it’s more of the same – honing our craft and getting even better at what we do. We’re only just beginning to see the collective benefit of our recent recruits, both in terms of culture and output.

We have won 11 new clients in the last 12 months, including the likes of Activision, Google, innocent and Beefeater – all of which we’re embarking on exciting new journeys with.

We’ve been activating all over the world, taking on more international work as well as European – including LA, Texas and Kuala Lumpur.

Should marketers be taking more personal responsibility for addressing the climate crisis?

Now is the time for marketers to take meaningful action to make businesses more sustainable for our planet.

How creativity helped Out of Home weather a pandemic

Despite being a sector hit hard by the pandemic, creativity has breathed a new lease of life into OOH

A Design for an affordable life