For its latest ad Lexus trained Artificial Intelligence to tell the story of the AI in the car. From script to final edit, here’s what happened when the brand relinquished creative control to the machines.

The robots are coming, and much faster than we might have imagined. The moment when artificial intelligence will exceed human intelligence is not far away. As with most new technology, the rise of the robots is bringing with it a wave of social unease.

This fear comes from a lack of understanding about what the advent of artificial intelligence really means for us: a lack of appreciation for the positives of this transformative new tech.

Both reason and emotion are holding us back from embracing this new tech, not least thanks to decades’ worth of literature and film persuading us that the dawn of AI spells the beginning of the end for humanity. As Vernor Vinge put it in 1993, “Within thirty years, we will have the means to create superhuman intelligence. Shortly after, the human era will be ended.”

The position of Lexus is very clear when it comes to artificial intelligence. As a brand at the forefront of technological innovation, Lexus has developed years’ worth of expertise in AI and how it can be applied to different levels of autonomous driving. It doesn’t believe artificial intelligence will end the human era but thinks of it as a transitioning to the start of a new era, of man and machine working collaboratively together, improving the world, and making it better for everyone.

This idea of man and machine working together is most visible in its most recent human creation: the Lexus ES. A luxury saloon car which draws on AI to create an unrivalled driving experience, responding automatically to the driver’s intentions and traffic and road conditions. The ES reads the road ahead, understands the world around it, and can even sense what the driver is feeling and adjust accordingly. It is an incredibly smart machine that feels almost alive and intuitive.

If Lexus believes AI’s potential lies in how it enables man and machine to work together, how could we apply AI in the creative process? This couldn’t simply be a nod to AI: it had to be a full-on commitment. Just as Lexus had placed a belief in AI-powered safety systems in its cars, we wanted to place our belief in an AI-powered creative process.

But which part of the creative process should we entrust to AI? This was when we realised how instructive it might be, both to Lexus and for the creative industries as a whole, if we could train an AI to tell a story about the AI in the car. An AI-powered product demonstration. So, we trained an AI to write a script, which would then be shot by a human director. Man, and machine working together in a new way.

‘Driven by Intuition’ makes an interesting case study because the learnings it creates for the industry are binary. Firstly, it’s an experiment in how to train an AI to write a script; secondly, the final output of the AI and its subsequent visual manifestation is interesting in and of itself.

What we learnt about AI was that the better it understands what it needs to output, the better it can understand the inputs you give it. We knew we wanted the AI to create a product demonstration ad which would appeal to the intuitive minds of the business executive audience that the ES was designed for, a group we called ‘Intuitive Leaders’.

Bringing the machine to life

So, the first step was training the AI to understand the rational and emotional cues that intuitive leaders respond to. To do that, we recruited scientists at MindX, the University of New South Wales, to create a bespoke study into what an intuitive mind prefers to see in a car ad, from car colour to emotional behaviour and driving scenes.

For this task, we turned to the home of great creativity, Cannes Lions, identifying and training our AI with 15 years’ worth of Cannes-Lions-winning car adverts. This would help give the AI a sense of script, story and structure. As Lexus is a luxury brand, we also created an input which showed how fashion houses and luxury brands communicate.

Whilst studying our Intuitive Leaders, we noticed they responded best to emotional campaigns rather than factual ones, but emotions can be wide-ranging. For example, we questioned whether we should be making people laugh or cry for example. For the answer, we partnered with Unruly to examine which emotional campaigns are most effective, and what triggers we should pull.

Finally, we fed our AI with Lexus’ brand guidelines and product marketing guides for the ES, so that it would understand what the brand world needed to feel like and what the key product points of the car were. And we waited. We waited and expected that the script would be odd. That there would be weird elements to it that made no sense. That we’d have to take the AI output and rewrite it ourselves for it to be of any use.

But the result couldn’t be further from this. The AI hadn’t just told us what the script needed to look like. It wrote the whole script for us. More than that, though, the script made sense. It had a narrative to it, albeit simple. It had clear emotions. It had understood the brand world and more, building in a character, a Japanese Takumi Craftsman, that the Lexus brand is known for.

The script was good. Yet spooky at the same time: our AI wrote the story of a machine that comes to life when it’s put in danger. If that’s not enough to make you fear AI, we don’t know what is. It was here that we realised the truth. That, as a creative industry, we sometimes run from technology when it can be incredibly helpful to us, when it could indeed help power the process and give us platforms or foundations to build upon.

We shouldn’t collectively be fearing the power of AI. We should be embracing it and experimenting in it, just as we have done for Lexus. 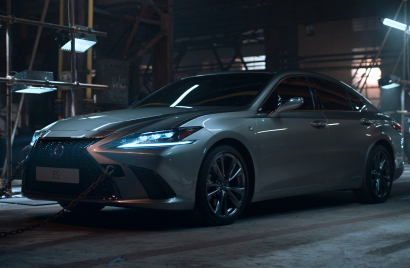 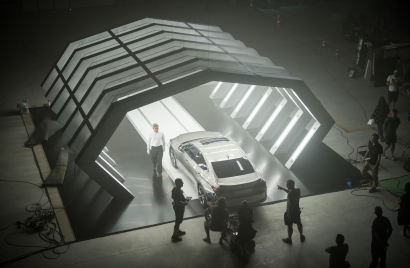 Matt is a global strategist with a shedload of experience as an innovative midfield general of strategy. He’s worked at many different agencies on two sides of the industry, media and creative, from being employee number 12 at The Brooklyn Brothers, to running a social media department at MediaCom, to RKCRY&R, and now being a global leader at The&Partnership. He’s been part of some of the world’s most effective launches, from automotive legends Range Rover, Jaguar and Lexus to campaigns for Inspired by Iceland, The Home Office, BBC, and T-Mobile. Matt’s thinking has helped win IPA Effectiveness, Cannes and Euro Effie awards for his clients.

Vue's new campaign reflects the shift in recent years towards more mindful consumption of entertainment, an acknowledgment of the mental cost of constant connection.