While often the signs of domestic abuse are not always visible, NoMore's campaign message is that, now that we are spending more time alongside our neighbours, we can help to be allies in the effort to stop domestic violence. 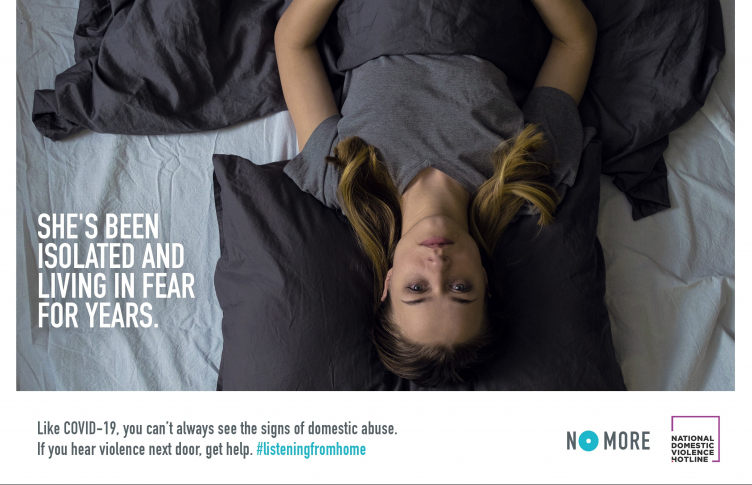 As cities go into lockdown to prevent COVID-19, MRM//McCann, the NO MORE Foundation and the National Domestic Violence Hotline teamed up on a new public awareness and action campaign to respond to a challenging byproduct of isolating at home: victims of domestic violence.

For many of us, being asked to stay at home is an inconvenience, a shift in our life that we can manage and deal with because staying inside is keeping us safe. Tragically, for others around the country who are victims of domestic violence, staying at home has meant that they are trapped with their abusers.

It is a reality that the NoMore Foundation want to raise awareness of, the fact that domestic violence, already a deadly epidemic, is only being exacerbated as more cities go into lockdown. Teaming up with MRM//McCann and the National Domestic Violence Hotline, the foundation has created a new public awareness and bystander campaign, ‘#ListeningFromHome’.

The campaign, designed for social media and to run on billboards in the UK, asks that neighbours learn to recognise the signs of this behaviour and also tells people how to safely get help if they do observe or overhear incidents of domestic abuse. It highlights that fear and isolation are not new for the victims of domestic violence.

The ‘#ListeningFromHome’ campaign has been designed for a period in which a huge proportion of society are spending significantly more time in their homes. While often the signs of domestic abuse are not always visible, the campaign’s message is that, now that we are spending more time alongside our neighbours, we can help to be allies in the effort to stop domestic violence.

One in four women and one in nine men experience severe physical violence from their partners according to the Centres for Disease Control and Prevention. The last thing these victims need is to be trapped in their homes but unfortunately, the current coronavirus crisis has necessitated that. This campaign is significant in its messaging because it builds on the importance of communities coming together to support one another, to keep each other safe during these unsettling and fearful times.