Not Model’s Own illustrates the sinister realities of coercive control 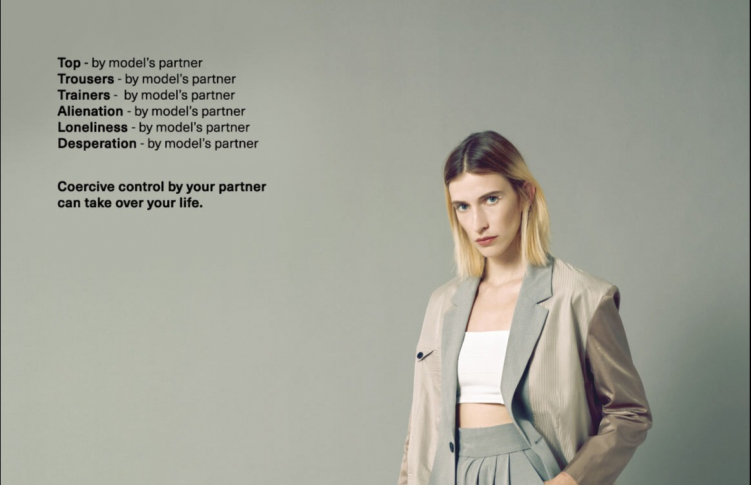 Engine Creative is behind a new campaign for Women’s Aid targeting young women to raise awareness about coercive control, an aspect of domestic abuse that is not often recognised.

Within the first two weeks of lockdown, there was a 41% increase in users visiting the Women’s Aid Live Chat site and over 24,856 coercive control offences were recorded by the police in England and Wales in the year ending March 2020. Coercive control is a pattern of behaviours used to control, manipulate or frighten another person.

Coercive control is difficult to identify as it’s a series of behaviours that build and escalate over time;  leaving emotional rather than just physical scars. Coercive control is illegal in the UK and has been since December 2015, yet records of offences have been slowly on the rise.

To raise awareness of coercive control, Women’s Aid and Engine Creative have launched the “Not Model’s Own” campaign to increase understanding of the behaviours that make up coercive control in the hope that it will be easier to identify, prevent and prosecute perpetrators.

The “Not Model’s Own” campaign takes inspiration from fashion advertising and editorial in glossy magazines to demonstrate the devastating effect of this controlling behaviour on survivors. At first glance, the campaign looks like a typical fashion ad but a closer look reveals something more sinister.

Coercive control makes victims second-guess themselves and their experiences as they become dependent on the perpetrator. Common examples of such behaviour include isolating survivors from family and friends, taking control of aspects of everyday life such as where someone can go and who they can see and humiliating or degrading behaviour.

Farah Nazeer, chief executive at Women’s Aid, explained: “Coercive control can be difficult to identify within a relationship, if you don't know what the signs are. A pattern of different forms of abuse with wide-ranging tactics can make it difficult to define, when you are being controlled and manipulated by a partner. Perpetrators slowly isolate survivors from support, deprive them of their independence and regulate their everyday behaviour, gaining more and more control.”

Where in usual fashion campaigns, the model’s clothing would be selected by stylists with brands name checked, the ‘Not Model’s Own’ campaign shows that all aspects are controlled by her partner to exemplify coercive control.

By using the fashion format that audiences are familiar with, Women’s Aid are able to capture attention and subvert expectations. Christopher Ringsell, Creative Director at Engine Creative, explains: “Drawing young women in with aspirational fashion shots and then letting them realise there is a sinister vulnerability behind the glossy look will hopefully raise awareness of coercive control and help the viewer question anything that does not feel right in their own relationship.”

The campaign aims to raise awareness and direct women to the Women’s Aid website, where they can get help and advice.

Farah Nazeer, chief executive at Women’s Aid, added: “This campaign is vital in raising awareness of coercive control to help survivors, and those around them, recognise the signs of abuse. If any of the signs highlighted in this campaign are familiar to you, Women’s Aid is here for you, please reach out for expert support.”

The print and outdoor campaign will run in women’s magazines and in selected fast-food outlets.

For help or support from Women’s Aid please click here.

Getting Past the Greenwash: 10 tips for taking your sustainability strategy beyond skin deep

What can we learn from our grandmothers?