Creative collaboration underpins a groundbreaking plan to save hundreds of species from extinction. 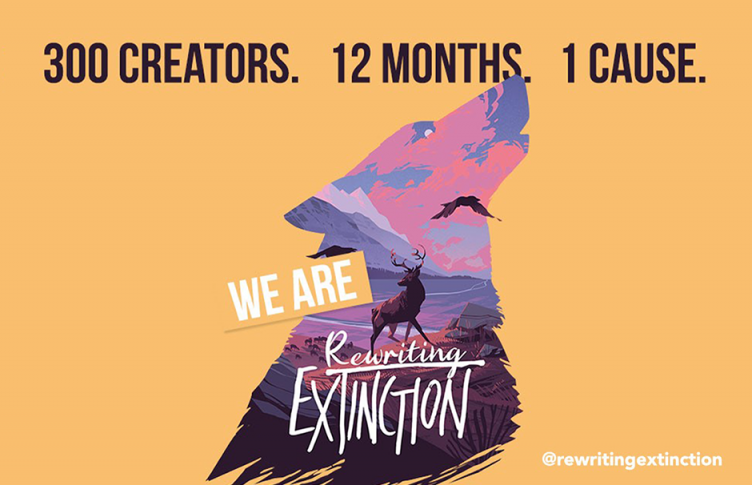 Media Bounty is the proud creative partner for the launch of Rewriting Extinction, a celeb-backed story-telling movement to save as many species from extinction as humanly possible. 300 contributors, 7 environmental charities, 1 cause.

Collaboration; it's one of the most powerful tools to solve some of the biggest challenges we face as individuals, businesses and society alike and it's at the centre of a groundbreaking global cross charity project to save as many of the 1m species facing extinction as humanly possible.

Currently we are losing around 200 species each day and this unique project is aiming to reverse this devastating trajectory. As the campaign explains: “We went to represent a moment in time when collectively, we put species extinction and biodiversity to the top of all our agendas.”

Rewriting Extinction is a global movement founded by Emmy nominated producer and writer Paul Goodenough. The movement will raise funds for charity partners Greenpeace, Born Free, The Wildlife Trusts, Reserva YLT, Re:wild, Rewilding Europe and the World Land Trust. The campaign is sponsoring 7 projects across the planet that will save as many species from extinction as humanly possible.

The charity partners will bring to life a specific set of projects to provide permanent solutions to saving specific species around the world. From purchasing critically threatened habitats in the rainforest to rewilding territories and preventing poaching, the campaign is a comprehensive drive encompassing education, action and empowerment.

Founder Paul Goodenough explained: “200 species go extinct every day. That just can’t go on. But right now, world-changing projects are underway that will solve the problems and put the world back into recovery. The sad thing is the general public have never heard of them, so the projects never get the funding or awareness they need.

We’re here to change that. We’re here to simplify environmentalism and give simple, easy and empowering actions that everyone can take – directly from our comics. So, whether it’s donating to a project, or changing hearts and minds, we’ve devoted 12 months of our lives to sorting this out once and for all.”

Throughout the 12-month campaign, online comics will be released in addition to a printed anthology published by DK Publishing. The campaign, which was launched by actor and model Cara Delevingne, has brought together 300 contributors, collaborators and celebrities to get the message to a broad audience.

Ethical creative agency Media Bounty, which was appointed as the creative partner for the launch, created the brand identity, naming, social media launch plan and media

Charlie Bennett, Head of Client Services at Media Bounty, explained: “We have worked with partner charities for over 10 years and have often seen the commercial model of the sector encourage siloed communication that preaches to the choir. So, it has been incredibly exciting to collaborate on a brief that calls for integrated strategy, far-reaching creative appeal and tangible outcomes. This pioneering project combines wildlife superpowers to defeat a common villain.”

This wide-reaching and ambitious approach marks a step-change for charities which can all too often find themselves in a cycle of single issue campaigns. The ambition and scale of this project underline the fallacy of believing that the big issues are simply too vast to address. Collaboration and creativity are the key to success.