Some brands are shirking the ordinary, the expected and the safe to move in the direction they believe is right.

This week sees the arrival of writer/director Cary Fukunaga’s eagerly awaited ‘Maniac’ on Netflix. Fukunaga is perhaps best known for directing every episode of HBO’s ‘True Detective’. The series was hugely praised and let Fukunaga run riot with his visceral, pitch-black direction. But when series two was announced, his involvement was not. Next, he became attached to Stephen King adaptation ‘IT’ before departing the project because of those oft-touted ‘creative differences’.

It seemed that because of Fukunaga’s commitment to doing something different or differently, he was gaining a reputation for being difficult. He put his departure from ‘IT’ down to his vision not fitting "into the algorithm of what [the studio] knew they could spend and make money back on.” A clash of creativity and the standard popcorn fare the studio wanted. Yet with ‘Maniac’, Fukunaga has shown he is capable of remaining the auteur and not sacrificing his integrity along the way.

It’s refreshing to see a director unwilling to compromise their creative vision for a studio’s commercial agenda. Yet this difficult and unpopular approach can reap rewards. Darren Aronofsky is not your atypical studio ‘yes man’, and his refusal to go with anyone else but Mickey Rourke for his 2008 feature ‘The Wrestler’ meant finding a new studio and working with half the budget. It also led to winning the Venice Film Festival’s Golden Lion and Rourke winning a BAFTA.

We have found ourselves in an era of people unafraid to apply the greatest of conviction to their beliefs. Brexit and Trump alone have made certain more people are finding their voice, whether outlining their stance on these issues, or the multitude that affect us every day. These beliefs can also be expressed through the brands we choose to associate ourselves with. No longer content for brands to sit on the sidelines, we instead expect them to make their point-of-view known.

A message is arguably at its most powerful when creative license meets impassioned belief. Think of Stella McCartney who refuses to use fur or leather in an industry not necessarily known for its environmental mindfulness. Whilst earlier this year, aviation giant American Airlines made it clear to the US government that children separated from their parents at the US-Mexico border would not be relocated on their planes.

Like ‘Maniac’ director Fukunaga, some brands are shirking the ordinary, the expected and the safe to move in the direction they believe is right. Whilst addressing (or perhaps exploiting) the opportunity for political statement our times afford.

‘Believe in Something. Even if it means sacrificing everything.’ The cynical among us might say these words are a little lofty for a sports brand. But when the words appear over the face of NFL quarterback turned activist Colin Kaepernick, the statement is clear.

Kaepernick put his career on the line when during NFL games he first sat and then kneeled during the National Anthem. Claims of being unpatriotic drowned out the player’s protests against the oppression of black people and police brutality across America.

Yet now his message is one that has spread worldwide, from other players to other sports. Earlier this year, Amnesty International even made him their Ambassador of Conscience.

The latest ‘Just Do It’ ad from NIKE and agency Wieden + Kennedy, Portland shows the brand’s support of Kaepernick and goes beyond sports performance to show commitment of a different sort. Consisting of a TV spot and a series of impactful print ads, the campaign has stoked the flames of modern day America’s political polarisation, with trainers being burned and the NIKE swoosh being chopped from its socks. All with the warning that NIKE’s stance would result in commercial disaster.

Instead, NIKE’s online sales were estimated to have jumped 31%. The brand gained 170,000 new Instagram followers, had its second most-liked post ever, and saw its stock close at an all-time high just days later. With two-thirds of the company’s trainers sold to customers under the age of 35, NIKE tapped into a demographic where everything has become political.

Whilst the details of Kaepernick’s contract with NIKE haven’t been announced, it is rumoured to include a contribution to his charity Know Your Rights. Having made an impact with Kaepernick’s (and arguably a victimised group’s) help, and sold a lot of trainers in the process, it’ll be interesting to see how NIKE continues in its statement. 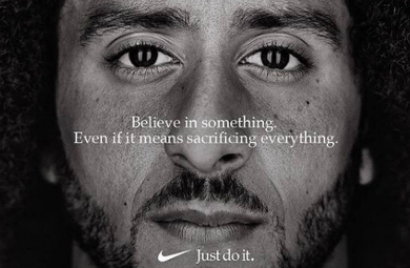 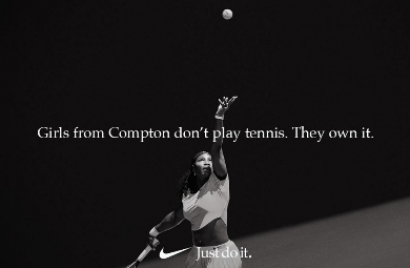 Diverse representations of society are becoming more commonplace, yet an unfortunate consequence of this is the bleaker side of public response. Recent campaigns by Nationwide, Maltesers and McCain have all featured diverse casting. And to exclaim the work that still needs to be done, Channel 4 dedicated an entire ad break to highlighting the abuse targeted at the actors and diversity represented in the campaigns. The ad is unflinching in the hatred shown. As the online abuse accumulates, each ad begins to turn toxic, distort and shatter. The campaign is uncomfortable watching, no doubt having many reaching for the remote. A risk from both Channel 4 and the brands involved, it shows that their work on diversity is not sugarcoated, nor is it momentary. 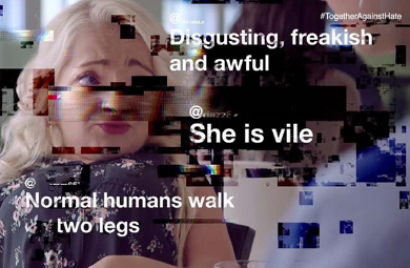 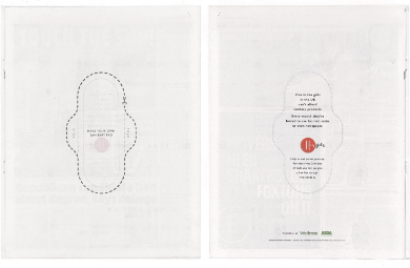 However crazy, talking about periods still remains taboo for some. The reality of period poverty and the fact that one in ten girls can’t afford sanitary products – more so. Appearing in the Metro, this ad from social enterprise Hey Girls used simplicity to power its message and not tiptoe around the issue by showing a cut-out sanitary pad and describing over the page how some young women are reduced to using newspaper as an alternative to appropriate products. With every box of pads, Hey Girls gives a free one to a girl who needs it in a bid to end period poverty. The ad is simple, toying with an idea some might initially take as a joke, to drive home the fact that this is no laughing matter nor one to turn away from.