The importance of space to the LGBT+ or any other community cannot be undervalued. Space can provide somewhere for conversation, for education and can be anywhere from a refuge to a home.

On 16 June 2018, the Diversity House community centre opened in St. Petersburg. Led by the Football Against Racism in Europe (FARE) network, the centre was intended as a safe space for ethnic and sexual minorities. The achievement is even more remarkable given that it took place in Russia, a country largely maligned for its attitudes and lack of legal protection for the LGBT+ community.

Then, two days later it closed. The landlord of the property gave FARE notice, leaving the organisation to find an alternative space, an eventuality the project coordinator said that they were sadly familiar with.

This is a good example of the importance of space to the LGBT+ community. Not only that, but of safe space.

At a recent PrideAM event, London’s Night Czar and comedian Amy Lamé exclaimed how “we’ve lost 58% of LGBT+ spaces in London boroughs in the past 10 years. Some boroughs have lost well over 70%.”

Whilst the LGBT+ community pushes forwards in its efforts to better representation, it is quite literally disappearing from the streets. The importance of space to the LGBT+ or any other community cannot be undervalued. Space can provide somewhere for conversation, for education and can be anywhere from a refuge to a home.

With the digital age, space takes on a different connotation. Think of our TV screens at home, our laptops, tablets and, perhaps most important of all, our phone screens. We shouldn’t undersell the value of these virtual spaces, particularly as advertisers. They’re widely accommodating of a range of messages, whether they be good, bad or focused on cats.

For underrepresented communities, they offer the chance to reach people who may not otherwise have been seen. But like their physical counterpart, virtual spaces for minority communities can be limited and often overshadowed. The opportunity here is for advertisers to protect and reserve these spaces for minority groups and in doing so, ensure a truer reflection of society.

A lot of the conversation around LGBT+ ad campaigns is to do with the authenticity of brand involvement. Are their campaigns ones that genuinely move the conversation forwards, engaging an audience as they go? Or are they ones that lack conviction in their message and instead become simply, and depressingly, about ticking boxes?

When you’re a brand with 100 plus years of history and reputation at stake, making an LGBT+ campaign which some may fear alienates a proportion of your audience is a risk. So, either the brand ducks the subject entirely or by lacking gusto creates a campaign with a message so vanilla, it’s hard for anyone to see it, let alone be influenced by it.

While it might be a risk for some, others see it as an opportunity. Take Apple Australia for instance. With same-sex marriage only legalised in Australia towards the end of 2017, Apple used this moment to continue their well-publicised support of the LGBT+ community.

Set to a cover version of INXS’s ‘Never Tear Us Apart’ from Australian singer Courtney Barnett, the ad doesn’t crowbar its product into the hands of the LGBT+ community, but rather celebrates the sense of union the recent law changes have allowed. The work from TBWA/Sydney looks at the first dance couples have at their weddings, a moment shown in many forms whether tender and intimate, classically romantic or (as many of us can empathise with) embarrassing and fun. The moment of a first dance is one we can all relate to regardless of whether we’re LGBT+ or not. It breaks ignorant perceptions that a gay marriage is something foreign and unknowable by tethering the moments shown and shared to our own. With a lot of brands tending to lean towards stereotypes in their campaigns, this one instead favours real-life.

Despite being shot with iPhones, the ad doesn’t once give screen time to the product or its features. Instead, it conveys the type of message and celebration an iPhone, or more to the point we, can capture, one that’s increasingly diverse and inclusive given 2017’s law changes. It’s a subtle brand message, neither overpowering, nor underwhelming. 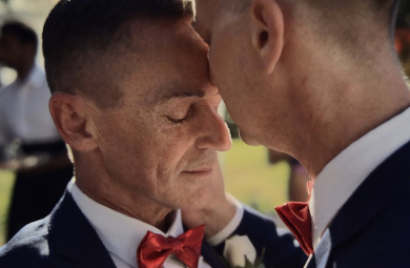 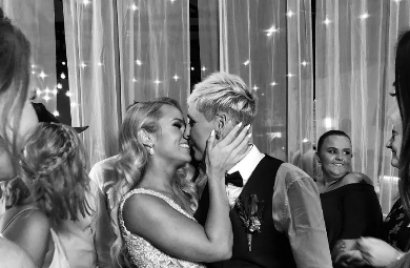 Having directed films such as ‘Romeo + Juliet’, ‘The Great Gatsby’ and ‘Strictly Ballroom’, Baz Luhrmann is someone from whom we don’t expect subtlety. In his ad for the ERDEM x H&M collection, Luhrmann makes certain every frame is dripping with exuberance and lavishness. Riffing off Evelyn Waugh’s 1945 novel ‘Brideshead Revisited’, the director creates a private world of decadence and acceptance in which his characters find solace from judgement. “It’s harsh out there in the world,” Luhrmann says, “but in here, the things that really matter keep growing in an eternal spring.” 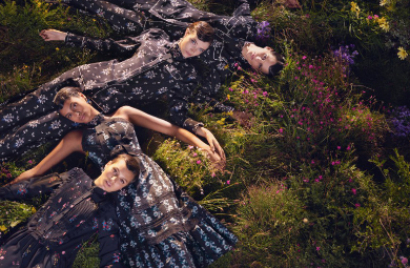 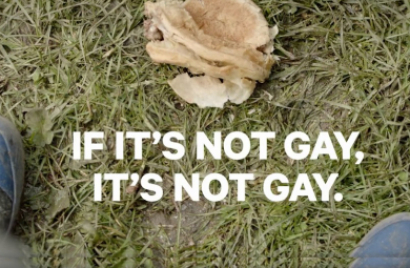 LGBT youth charity Rainbow Youth dealt Y&R Auckland a tricky brief: stop people using the word ‘gay’ as an insult. In what is the charity’s first ad, Y&R focussed on the rural community, somewhere copywriter Lizzie Baird says is particularly difficult for LGBT+ youths to come out. The ad is simple and refuses to dress up its message to ensure it hits home. On release, the ad received well over 700,000 views in its first week and reached 1.7 million people on Facebook.

With the tagline, “Dating deserves better” OkCupid looked to repurpose the acronym DTF to show there’s more to dating than what this acronym stands for. Championing a sense of playfulness, the print ads show alternative DTFs that include ‘down to finish my novel’, ‘down to the farmer’s market’ and ‘down to fight about the President’. The last of these alludes to the ‘Trump filter’ the dating site now includes in its list of questions to new members. It shows dating to be inclusive and varying in its forms, knocking down the barriers that the LGBT+ community and other minority groups are too frequently confronted with. 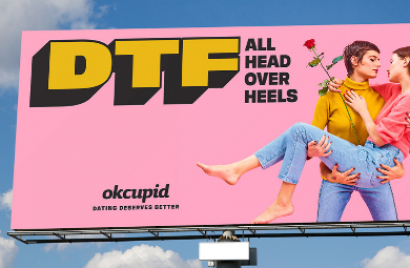