TalkSPORT marks the launch of the World Cup with giant mural

The hand painted mural from Pulse Creative, shines a spotlight on talkSPORT’s non-stop coverage of the World Cup

With the World Cup now well under way, talkSPORT is positioning itself as the home of World Cup radio coverage, broadcasting each game and talking about the tournament non-stop. To bring to life the larger than life ‘wall-to-wall’ coverage talkSPORT has created a huge eye-catching 50ft mural created by News UK’s dedicated agency, Pulse Creative (a joint-venture between The&Partnership, mSix&Partners and Wunderman Thompson).

The hand-painted mural can be found in Shoreditch and features distinctive art style depicting presenters and football familiars that illustrate the non-stop coverage of the upcoming World Cup in Qatar.

“Our audience should get ready for the most incredible wall-to-wall reporting, insight and analysis from commentators and pundits across our network. It’s our strongest-ever squad and this campaign highlights our 24/7 coverage brilliantly.” says Lee Clayton, Head of talkSPORT.

He continued: “I can’t wait to see Jim White and Simon Jordan breaking stories and inviting the biggest names from the hotbed of Qatar. This World Cup is going to be explosive and we have the best possible team covering every moment on and off the field, delivering their insight and opinion - tune in and you won’t miss a second of the action.”

In addition to the mural are a series of short films that bring the painting to a wider audience. One of the films shows two hooded figures painting the mural before revealing themselves as talkSPORT Gameday Phone-In host Gabby Agbonlahor, and sports breakfast broadcaster Alan Brazil. Brazil is joined by fellow World Cup veteran Ally McCoist, who scolds the pair for running late to a live broadcast.

The campaign successfully paints a picture of the larger than life coverage talkSPORT is able to bring to the games, building up excitement for football fanatics everywhere. 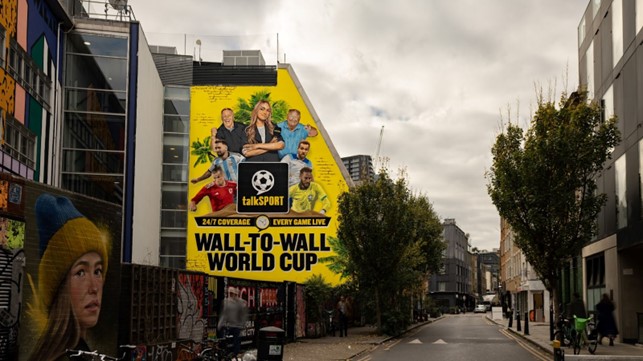