Stack's latest campaign has been designed to attract people’s attention, to change their long entrenched habits about this stretch of road and help prevent any more accidents. 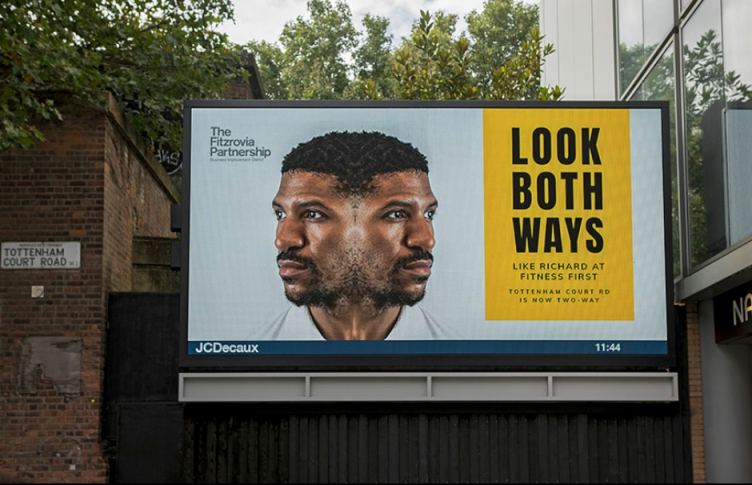 Following a spate of accidents after Tottenham Court Road became a two-way street, we created the Look Both Ways campaign. Featuring members of the community simultaneously looking up and down the street, the eye-catching ads reminded people to look both ways when crossing.

After years of operating as a one-way road, in April 2019, Tottenham Court Road became two-way, to minimal fanfare. The change has been introduced to primarily reduce congestion, improve journey times and make bus journeys less confusing.

But there was a real lack of awareness raised to highlight the change, something that became increasingly dangerous for many pedestrians. After a spate of accidents on the road including one that resulted in life changing injuries, Stack decided to work with the Fitzrovia Partnership on a new road safety campaign.

‘Look Both Ways’ is a community initiative, a campaign which is running across social, outdoor and experiential. The ambassadors chosen to star in the campaign are part of the Tottenham Court Road community, from pub landlords to shop staff, coffee baristas and personal trainers; all shot for the ad in head-turning fashion.

Stack created imagery that was designed to stand out against the colourful vibrancy of Tottenham Court Road. It had to attract people’s attention, to change their long entrenched habits about this stretch of road and help prevent any more accidents. Stack also worked alongside the Gate to secure prominent media space particularly around Goodge Street, the scene of one of the most severe accidents to date.

The Tottenham Court Road area is undergoing a £35m revamp that will restrict cars, lorries and taxis along the road. This is something that is welcomed by the local community but also a change that needs to be communicated to people in the area. A campaign like this demonstrates the power of eye catching imagery to make you stop, look and then go.

DICE launches to improve diversity at conferences and events

All-white 'manels' are often still the norm at industry events. But DICE, launched today, is setting out to change this by introducing a 10-point charter to improve diversity and inclusion across industry conferences and events.

Are marketing careers becoming more Squiggly and what should the industry do to adapt to the end of linear careers paths?

In an era in which creative people have the tools and the inclinations to create their own paths to success and happiness, business as usual is no longer an option.

Uber Eats brings a little moment of joy to the everyday

‘Bring It’ reminds us to embrace the moments in life, however small, that can make you smile embodied by a charismatic courier delivering food with a side order of positivity.