UK Out of Home thanks key workers from a ‘Grateful Britain’

A campaign such as this not only demonstrates the power of brilliant, hard-hitting, attention-grabbing copy, but also what can happen when businesses who would ordinarily be competitors come together to collaborate. 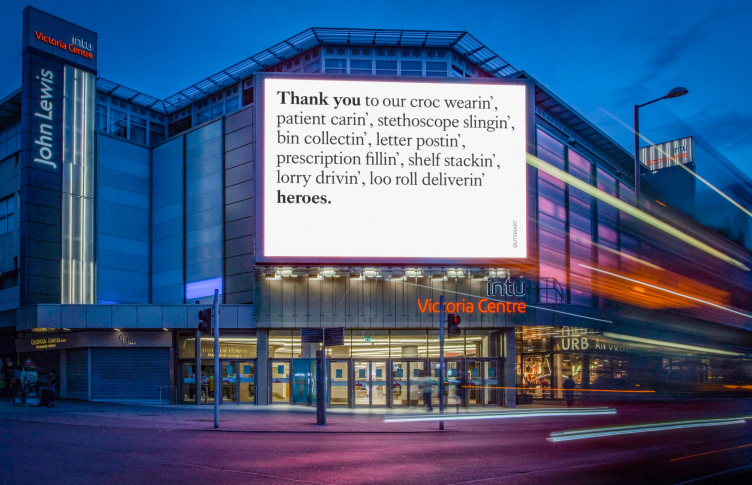 Thank you to our amazing heroes.

Many of the people heading out to work every day during this pandemic are the ones that you might ordinarily, ashamedly take little notice of; the bus drivers people breeze past, desperate to get a seat; the postal worker as they step back to let you through in your building’s lobby; or the supermarket worker, packing and repacking the shelves around you as you blindly rush from aisle to aisle through the shop.

These are the individuals who are keeping the country going. And they are the subject of a nationwide collaborative and celebrative campaign from the UK’s Out of Home industry entitled ‘Grateful Britain.’ Created by Mother London and produced by Grand Visual, the copy-heavy campaign uses light humour and a lyrical format to demonstrate the nation’s gratitude towards those key workers at the forefront of both the daily fight against coronavirus, but also others who are essential to keeping the country running in this time of crisis.

The campaign was initiated by Outsmart, the OOH trade association, and will run on media space through April and May that has been donated by Clear Channel, JC Decaux, blowUp media, Mass Media, Ocean Outdoor, Maxx Media and UK Billboards. More members are expected to join as the campaign progresses and the messaging develops over the coming weeks.

‘Grateful Britain’ will run in key OOH spots around the country so that those being celebrated and thanked in the campaign will be the ones to see it in situ. Supporting posts will also be sent out across social media.

A campaign such as this not only demonstrates the power of brilliant, hard-hitting, attention-grabbing copy, but also what can happen when businesses who would ordinarily be competitors come together to collaborate. It is such shared community spirit and resources that allow for not only greater creativity but also for a far greater campaign reach, which gives the message a greater chance of reaching those who deserve to read it most.