What athletes with learning difficulties can teach the ad industry

Mark Fairbanks, ECD of Good Brains For Good Brands on a vital campaign for Special Olympics Ireland that demonstrated the power of refusing to believe in ‘can’t’.

COVID-19 and the recession it has caused has had a huge effect on all of us. But none more so than the most vulnerable in our society. The pandemic is predicted to create an enormous £10.1 billion fundraising hole in the charity sector in the UK and Ireland. People everywhere are understandably tightening their belts and rationing their charitable donations like never before. Putting an alarming proportion of charity jobs and services in the firing line when people need them the most.

This darkest of times for good causes needed a whole new way of thinking to provide a solution.

A huge proportion of these charities, especially the smaller ones, didn’t have ad agencies to call on to help them reach out. At the same time, another result of the pandemic has been the dramatic increase in the amount of people in the creative industries either losing their jobs, being furloughed or turning to freelance work.

Good Brains For Good Brands was set up to bring both halves of that equation together; this huge well of creative talent using their time, energy and skills to help out those charities that desperately need them.

The inspiring athletes of Special Olympics Ireland conquer every obstacle thrown their way because they refuse to believe in ‘Can’t’.

One such charity is Special Olympics Ireland, the charity that helps thousands of young people across the island with intellectual disabilities to use sport as a means to help them learn how to thrive in life. A lot of charities like SOI would normally rely on traditional methods of fundraising such as street collections and sponsored events. Obviously, the pandemic has put paid to those.

GB4GB’s task on behalf of SOI, as it is with all charities it works on, was not a simple one. How do you motivate people to dig deep, even when money is so tight, and start donating online?

The first thing that was needed was to create the perfect team to take the job on. A hand-picked squad was assembled featuring top creative, planning, account handling and production talent. This team then worked hand in hand with their willing counterparts at Special Olympics Ireland to define the precise need.

The CD Mark Shanley and AD Susan O'Hanlon are both from Ireland, so they grew up experiencing the spirit of community that Special Olympics has built. The strategy lead on this project, Aparna Bangur, is a single parent of a child with autism so she has first-hand insight on how simply learning to turn the wheels of a bike forward is such an extraordinary moment to celebrate.

SOI has a 96% unprompted awareness in Ireland. Every home, every community knows what the charity does. It inspires generations of intellectually disabled people to rise to any challenge. To remove the word ‘Can’t’ from their vocabulary. But there was one barrier that their passion and determination just couldn’t defeat: the lack of funds.

And from this insight came the campaign. ‘CAN’T STOP NOW’ set out to celebrate these very special young people and the journey they’ve been on and show the Irish public that whatever they could afford would help these athletes take their all-important next steps.

Scripts were written, print ads scamped, social posts devised. SOI loved the idea. They also loved the concepts. Because they had worked so closely with the GB4GB team, everything was on brand and on brief. Next came an even bigger barrier to overcome: how to bring all these concepts to life?

SOI themselves had lots of media contacts and influencers like Colin Farrell which they put at GB4GB’s disposal. But the production of the assets was when the GB4GB crew came into their own. Every member of the team hustled like they’d never hustled before. Everyone reached out to their production contacts and drew in favour after favour from some amazing companies and individuals. People who believed in both the cause and the creative.

Over the ensuing weeks, a 60-second film featuring a number of SOI athletes, Colin Farrell and the music of Hozier was created. Like a Nike film, hardly surprising given that it had the creator of Nike’s ‘Nothing beats a Londoner’ at the helm of the campaign, but for no money. Then in a similar vein came the rest of the campaign. Radio ads, a dozen posters, half a dozen press ads and a myriad of digital assets spread over both display and social. A huge undertaking that took boundless effort from everyone involved.

A lesson for marketers

The results are now out for everyone to see. The only outcome that truly matters though will come as the donations that will hopefully flood in are counted.

This whole process is the blueprint for how Good Brains For Good Brands works with every charity that comes to it for help and maybe could serve as a valuable lesson for many brands, especially during such testing times. Client teams and ‘agency’ teams working very closely together, honest discussion and both sides willing to listen and learn, egos left at the door, or by the side of the Zoom screen, working out the single-minded truth that the brand can own, energy and hustle on both sides, an unwillingness to settle for ordinary or to rely on old-fashioned methodologies and dogma, and most importantly of all, a genuine belief that the way to achieve the right result is to unleash the power of true creativity, in every sense.

The inspiring athletes of Special Olympics Ireland conquer every obstacle thrown their way because they refuse to believe in ‘Can’t’. Marketers everywhere take heed. 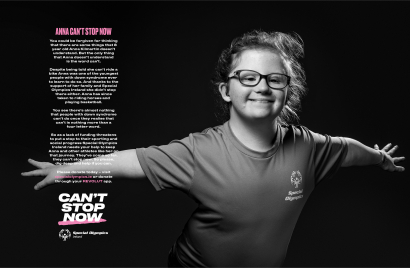 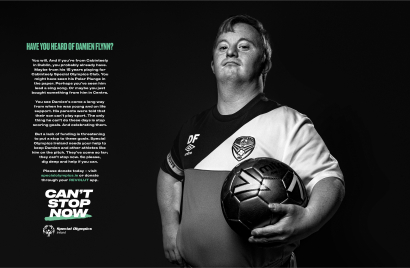 Mark has been in advertising for 30 years, leading teams and departments at agencies ranging from Abbott Mead Vickers to R/GA. In that time, he has worked on and ran such clients as Guinness, Nike, The Economist, Snickers, Chivas, Doritos, Google and many, many more leading to an accumulation of over 220 national and international awards for creativity. In the charity sector he has produced notable work for The Samaritans, Kids Company, Clic Sargent, CRUK and Malaria Must Die. For Cancer Research UK he produced the work that was responsible for finally convincing the government to implement plain-packaging for cigarettes, whilst the innovative Voice Petition for Malaria Must Die was instrumental in securing $14Bn worth of aid from the UN in the fight against the world’s oldest and deadliest disease. He is currently freelance and also the ECD of pro bono charity collective Good Brains For Good Brands.