The world is far from acceptance without exception

When Stonewall launched their first new campaign in 10 years, it was to speak to the ‘silent majority’ and mobilise them to make us much noise as the haters, to become vocal allies in the fight for equality.

Stonewall - Alexa, Come out for LGBT

The rise of intolerance is everywhere. From Trump and the recent elections in Italy, to Nigel Farage and his part in the Brexit campaign. You can barely read the news (let alone jump on Twitter) without seeing yet another horror story from somewhere in the world about rights being eroded or hateful attitudes being enforced. And with more liberal people being branded “snowflakes” and being accused of “virtue signalling” it can feel scary to speak up. Social media doesn’t help, where the idea of sharing feels almost as powerful as the kind of activism (or donation) that creates a louder call for change. Mr President are passionate activists for change, so nothing could be more important than working with Stonewall on LGBT rights in the UK.

There is a substantial majority of people in the UK who are broadly accepting of LGBT rights. They are the often-silent majority. And although it can feel as though great strides have been made towards LGBT rights in the UK following legislation of gay marriage, that’s no reason for the UK to rest on its laurels. Whilst there are many reasons to celebrate, the fight for equality is far from over.

In 2017, Stonewall’s research with YouGov found that hate crime against the community had risen significantly over the last five years. Shockingly, one in five LGBT people in the UK had experienced a hate crime in the last 12 months. Ruth Hunt CEO at Stonewall stated “While we have come a long way in the past 25 years, it is clear there is still a huge amount of work we need to do before all LGBT people can feel safe, included and free to be themselves in Britain today.”

The biggest issue is that those who are supporters of LGBT rights often remain silent, assuming that it has become a less pressing issue, or are unsure of how to be better allies. So, when Stonewall launched their first new campaign in 10 years, it was to speak to this ‘silent majority’ and mobilise them to make us much noise as the haters, to become vocal allies in the fight for equality. 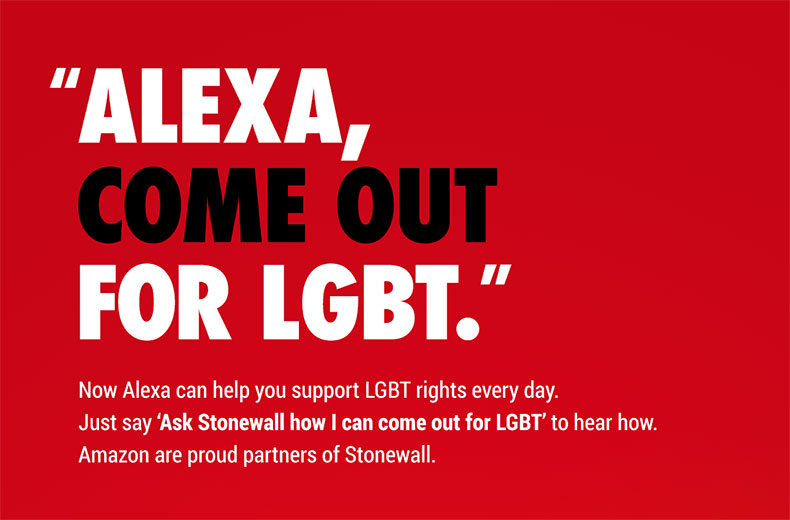 32
number of UK prides supported by the campaign

33%
increase in people coming out for LGBT

Alexa, Come out for LGBT

There are so many people who could speak up in support, we needed to remind people that we all have a part to play in creating a world where everyone, everywhere can be themselves. Whether you are in LGBT communities supporting others, or someone who believes in equality but has little to do with activism day-to-day, your voice matters. All we needed to do was inspire it. Our stand-up-and-be-counted, Brand Defining Idea “Come Out For LGBT” is a platform that rallies allies and encourages them to become active and visible supporters pushing for greater acceptance. A positive and powerful message to get our mainstream allies excited about the movement, that also speaks to LGBT+ supporters.

We know how important it is for behaviour change for people to see that the UK is full of unexpected allies, allies they can identify with and who represent a broader view of acceptance. So, we brought on board everyone from senior British Army figures and faith representatives, people from different cultural backgrounds and groups such as the police to campaign for us. By using these key figures across different communities and groups in the UK, the campaign reached out to everyone who supports LGBT equality. Because no matter who you are, whatever you do and however you do it, now is the time to stand up and be heard.

The campaign has been running across the UK, on everything from the sides of buses to school common room walls, and on cinema, TV and digital, driving a three-year-long programme.

Launching this week, we have gone further to encourage local participation, supporting 32 prides around the UK with messages around how to be a better ally every day of the year.

We have just launched Stonewall’s partnership with Amazon, our first Alexa project. We know that lack of understanding around LGBT issues means that some supporters aren’t confident to speak up as allies for fear of saying the wrong thing. This is especially true in more remote or closed communities where there may not be anyone to ask directly. So, we are reaching out to people in their homes instead. Amazon has gifted some of the core Alexa questions around sexuality and gender to Stonewall (e.g. “Alexa, am I gay?”) and developed a Skill that will tackle the queries that people may have. Our plan is to give our Amazon audience the skills, vocabulary and knowledge to be brilliant allies in future.

Stonewall wants everyone across Britain who cares about equality to join our campaign and pledge to Come Out For LGBT everywhere, as visible allies. Together we can create a world where LGBT people are accepted without exception.

Within the first day of the campaign, we had garnered support from allies as diverse as Russell Brand, J.K. Rowling, Manchester United, and the British Army. The story was talked about in The Guardian, The Sun, Independent, NBC and Sky. Mid-campaign, Stonewall had already seen a 33% improvement in willingness to come out in support of LGBT rights.

Most importantly this is a campaign that we can build on over time, to radically change the commitment of supporters into visible and vocal allies, for many years to come.

I couldn’t be prouder to #ComeOutForLGBT 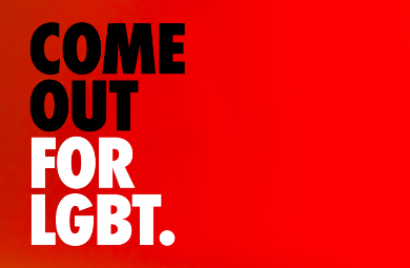 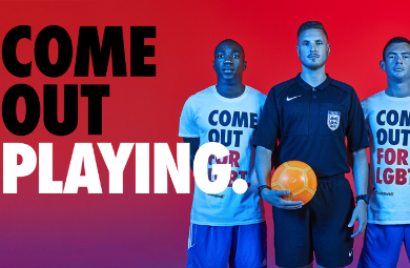 One of the world’s few female Chief Creative Officers, Laura is former president of D&AD, has recently been named one of Britain’s most influential people within the Debrett’s 500 annual list for the second year running, scooped up Individual of the Year at the Dadi Awards and been awarded an honorary doctorate for her services to graphic design from University of the Arts, London (Norwich). Laura is a co-founder of SheSays, a global volunteer network which works to get more women into the creative industries. She is also a co-founder of The Great British Diversity Experiment, the largest practical experiment in diversity and its contribution to commercial creative practice.

At the Advertising Association, The IPA and ISBA’s annual summit, LEAD, talent, trust and sustainability were top of the agenda.