Pepsi Max and Ignis successfully showcase the power of the Lionesses

The brands’ multi-platformed support of the Women’s Euros underlines the power of brands to change the narrative. 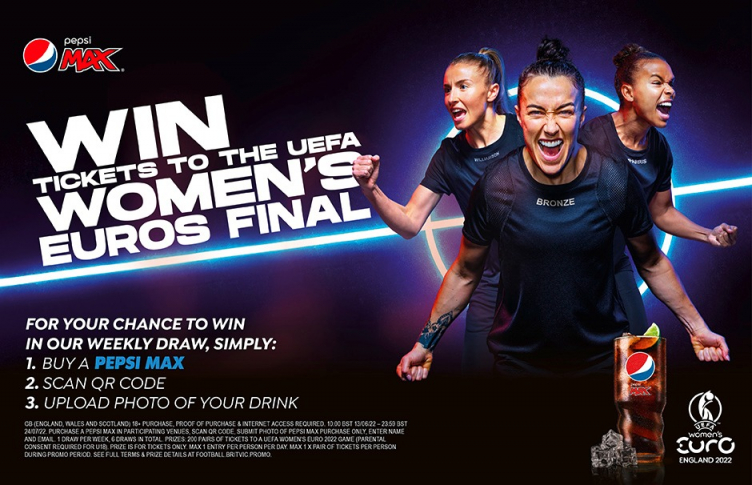 With women's football starting to explode and Pepsi Max's long term association with football, we've worked with Britvic to give pub goers the chance to win tickets to the UEFA Women's Euro 2022 Finals throughout the tournament. Promotional kits have gone to over 6.5k.

England’s historic victory in the Women’s Euros saw women’s football on the front page of every newspaper across the UK.

Women depicted in the ‘heroine’ pose of sporting achievement, excellence and endeavour; a depiction which has historically been the preserve of men. An everyday, often unquestioned visual diet of exclusion.

As we look back on the marketing legacy of this historic victory it is easy to focus on the big campaigns, the guerilla marketing moments and stunts. Yet arguably, it's the brands that are depicting and promoting the England team as the sporting heroines they are; who are contributing to the shifting visual landscape which will help to level the playing field for years to come.

It’s a shift which is not just about big campaigns, it's the everyday moments - the on-pack promotions and on-and-off trade activations which men have so long dominated. Pepsi Max, which is a brand with a long-running association with UEFA and the Champions League, is one such brand that has successfully shifted the dial.

As part of a multi-pronged campaign to support the Women’s Euros Pepsi worked with London based independent creative agency, Ignis and a number of on-trade partners to both drive awareness of the games, build in pub anticipation and offer Pepsi Max consumers pairs of tickets to every stage of the tournament right through to the Wembley final. The kits were distributed to 6,500 pubs across the UK.

Nick Peters, Ignis Executive Creative Director, explained: “It was a real honour to be involved in this exciting campaign to both build in pub destination opportunities for the growing interest in the games, and offer customers the chance to go to the sell out matches”.

David Parkinson, Britvic Shopper Marketing Manager added that the muti-faceted campaign enabled the brand to  “celebrate the UEFA Women’s Euros and the quality football on display”. A celebration, in heroine pose, that shows no sign of slowing down anytime soon.