“Telling the truth is very liberating”: Simon Gunning on how creativity can change culture.

In the UK, 84 men take their own life every single week. If you are a man aged under-45 in the UK the most likely thing to kill you, is you. A statistic that is behind CALM’s (Campaign Against Living Miserably) drive to create a movement against male suicide.

When it comes to breaking down the stigma and veil of silence that surrounds male mental health there is no question that marketing and the creative industries have a vital role to play. CALM’s ground-breaking ‘Project 84’ campaign, created by adam&eveDDB, powerfully bought these shocking statistics to life.

The project was, for Simon Gunning, CEO at CALM, one of his proudest moments to date because of the growth in awareness that came as a result. Backed by Harry’s Grooming, CALM created 84 sculptures to represent the 84 men who take their own life every week in the UK. The emotive sculptures, which were placed on the top of the ITV building on the Southbank in London, sent a powerful message, giving people, especially men, the confidence to start talking openly about their mental health. But, most importantly, it saved people’s lives.

In the last few years there has been a surge in sympathy and embracing of the subject matter from the general public, says Gunning. CALM no longer has just a singular mission but has “expanded to be something much more like a popular movement.” The campaign was also the catalyst for the government’s decision to appoint a suicide prevention minister and launch the Global Ministerial Mental Health Summit.

Our method of communication actually isn’t masculine. What it is, is contemporary.

In an ecosystem in which many brands and agencies talk about shifting culture, CALM is a charity that has genuinely brought this lofty ideal to life. Gunning’s experience in advertising and media - he has worked at companies including BBH, EMI and the BBC - has paid dividends. When he joined CALM two years ago, he was tasked with running the charity like a business, to build it as you would a brand. There was, says Gunning, an “opportunity to do it in a way that wasn’t finger waggy.” CALM “don’t see themselves as a charity,” says Gunning, "and that’s why we’ve been able to succeed."

With Professor Green as their patron and a myriad of other high-profile ambassadors, Gunning says part of their success is that “our method of communication actually isn’t masculine. What it is, is contemporary.” CALM made a conscious shift away from the fear-based narratives often relied on by the charity sector, to “give people practical solutions to combat the horror.”

These ambassadors are essential, believes Gunning because their behaviour and their openness and willingness to share their stories encourages others to do the same: “The sort of behaviour our ambassadors exhibit is such an important way to encourage behaviour change in society more broadly.”

[We have] instil[led] a culture here that is based on the values of the brand, which [are] kindness, tolerance, community…and hope.

Gunning is dismissive of commentators like Piers Morgan who he believes miss the point when it comes to the power and relevance of celebrities being honest about their experiences and challenges. According to Gunning when Professor Green opens up, “he’s exhibiting the kind of strong behaviours that the likes of Piers Morgan would conflate with weakness.”

And it’s this behavioural change that Gunning wants to bring about with CALM, beginning first with the culture of the company. It’s a company that, in the last two years, has grown from eight to 36 people in the London office and 10 to 20 people on the helpline which is an 120% year on year growth and, according to CALM, directly prevents 2.3 suicides a day. As Gunning says, we have “instil[led] a culture here that is based on the values of the brand, which [are] kindness, tolerance, community…and hope.”

The BBC, Gunning reveals was a “place where it was OK to pause,” where you could be in a meeting and have time to think and just catch your breath. This sort of willing lean towards vulnerability is what Gunning wants to see happening across society but also within the advertising industry, especially when it comes to the creative tension between agency and client. Gunning believes that there is a “productive tension if you challenge each other.” Having worked alongside adam&eveDDB on several ground-breaking projects, including 'Project 84', he taps his fingers with an excited agitation as he talks of the next big creative idea bubbling away in the pipeline.

The sort of behaviour our ambassadors exhibit is such an important way to encourage behaviour change in society more broadly.

When he is not tackling the stigma surrounding male mental health Gunning can be found playing his guitar and riding his motorbike. He believes that it is through those pursuits that he is learning to control his thoughts.

As a leader who walks the walk when it comes to mental health, he is open about the challenges of tackling such an emotive issue on a daily basis. He explains: “I’m of an age where I find this all quite difficult. Talking about mental health and talking about suicide I find quite hard. There’s a handbrake that goes on.”

The creative work and cultural impact Gunning has overseen at CALM is a testament to this honesty. In an era in which ‘authenticity’ is at the top of the marketing and business agenda, Gunning’s success underlines that it is far more than just a buzzword. For as the success of CALM shows, commitment to a ground-breaking creative idea can not only shift culture but save lives. 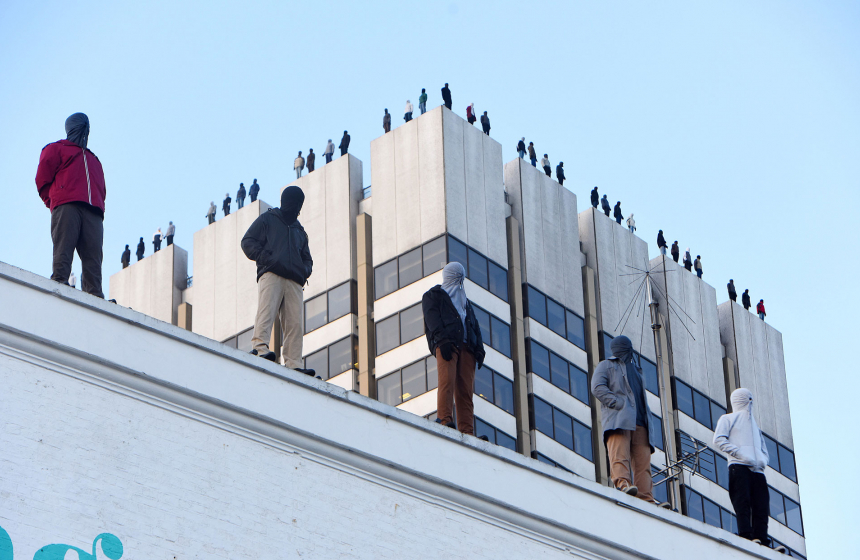 Q: As CEO at CALM, what is your primary focus?
A: CALM has gone through a period of rapid and extreme growth and keeping up with it all is an exciting challenge. As awareness of us as a real alternative to the mental health establishment has grown so has demand on our helpline; we took 9,000 calls and webchats last month and directly prevented two suicides every day. This has been made possible by a huge growth in support from people around the country, generated by campaigns like #project84 and partnerships with organisations such as Instagram, ITV, DaveTV, Top Shop & Top Man, Tesco, SEAT and more. Our ambassadors have grown in number too. Led by Professor Green we’ve also been privileged to recruit Loyle Carner, Sam Fender, Lewis Capaldi, The Connor Brothers, Romesh Ranganathan, Rob Beckett and James Acaster alongside others. We need to continue to get our message of hope in front of as many people as we can and grow our campaigning and frontline services at the same time. It’s a challenge but a really great one. The CALM machine is simple: campaigns = brand awareness = support = revenue = services to make people’s lives better.

Q: What has been your best or most important work in the last year?
A: Project 84, our collaboration with ITV and Harry’s Grooming, changed CALM, changed the purpose-driven campaign landscape and moved conversations about mental health along like nothing before. Adam&Eve responded to our brief - ‘do something borderline illegal and win a Cannes Lion’ - with the idea of putting 84 statues, the number of men who kill themselves each week in the UK, made by bereaved families in a prominent location to drive conversation about suicide. It exploded like nothing before; 2.3 billion pieces of social media in a week, 130 million TV viewers. It had coverage from around the world and, because of the petition we ran alongside it, resulted in the appointment of the world’s first Minister for Suicide Prevention for which CALM literally wrote the job description and objectives. Most importantly the CALM helpline maintains a 110% increase in lives saved and calls year on year and our revenue to pay for services has grown exponentially. Awards tally to date: 8 Lions, 7 Clios, MediaWeek Grand Prix, 8 Campaign awards and 8 Gold One Shows.

Q: What do you think makes a successful client/agency relationship?
A: Healthy productive tension. Don’t settle, provoke, add, challenge. You’ve got to nurture mutual respect so that when you challenge, whether you are client or agency-side, you produce better work, not resentment. If you are client side, don’t be a dick head. If you’re agency side, try to understand the pressure on your client. Whatever your job, get your card behind the bar and make sure you laugh a lot.

You’ve got to nurture mutual respect so that when you challenge, whether you are client or agency-side, you produce better work, not resentment.

Q: How do you see the advertising/marketing landscape evolving over the next few years?
A: From our perspective we are certainly seeing organisations adopting positive causes that honestly look after their audience. Harry’s Grooming, Tesco, Topshop, Topman, SEAT, Instagram, DaveTV, ITV are all working with us to genuinely care about their customers’ lives. People appreciate it and their brand value grows. It works.

Q: What is your greatest challenge? And what are your ambitions for CALM over the next few years?
A: Frankly my biggest challenge right now is picking and executing the right partnerships and campaigns to change behaviour and drive awareness whilst ensuring our messaging and reputation continues to grow. We’ve got a world-class executive team in place with a rapidly growing staff and motivation isn’t difficult when you’re doing real good in the world. If anything, we need to hold the awareness lead pretty tightly so we can continue to deliver services to audiences that need them. We’re also being led by the people that love CALM to grow our remit to become a popular movement rather than a single-issue organisation. People from all walks of life, from all genders and circumstances are seeing what we are, a movement for hope, kindness, tolerance and community and they’re saying ‘yes – that’s how I want the world to be’. In terms of ambition, we need to grow our reach, revenue and services to meet demand. It feels like demand is endless so there’s a lot of work to do. I want CALM to represent an approach to life that embodies kindness, tolerance, community and ultimately hope. We do this through campaigns, partnerships, comedy, sport and music and the room for growth is massive.

Q: What piece of advice do you give to the junior members of your team?
A: Enjoy what you’re doing right now. Doing real good in the world gives us a huge advantage because we don’t need to sell, we don’t need to lie. Telling the truth is very liberating. We work hard and we behave like a commercial organisation and brand; by doing so we reach huge numbers of people and we’re changing the world. This kind of opportunity is rare, and it demands a lot from us, but our form of success is certainly better than any other I’ve encountered in my bloody weird career.

Simon will be hosting a panel at BITE LIVE 2019 on how to balance creativity, commerciality and integrity, alongside brands and media owners.