Are agency brands doomed? What we learned

When you ask a question like are agency brands doomed, it might not seem the most positive start to a conversation. 2018 was a rough year though, with plenty of agency brands going to the wall and being swallowed up by larger conglomerates. For an industry with creativity at its heart, it looked like it was becoming increasingly sidelined in favour of consolidations, mergers and balancing the books.

We’re an industry where the highest paid people are the accountants. And when you’re in an industry like that, creativity will not be at the top of the list.

When we asked the audience for a show of hands (or cards) on whether they thought the future of agency brands was doomed, the results were heartening – as you can see below. 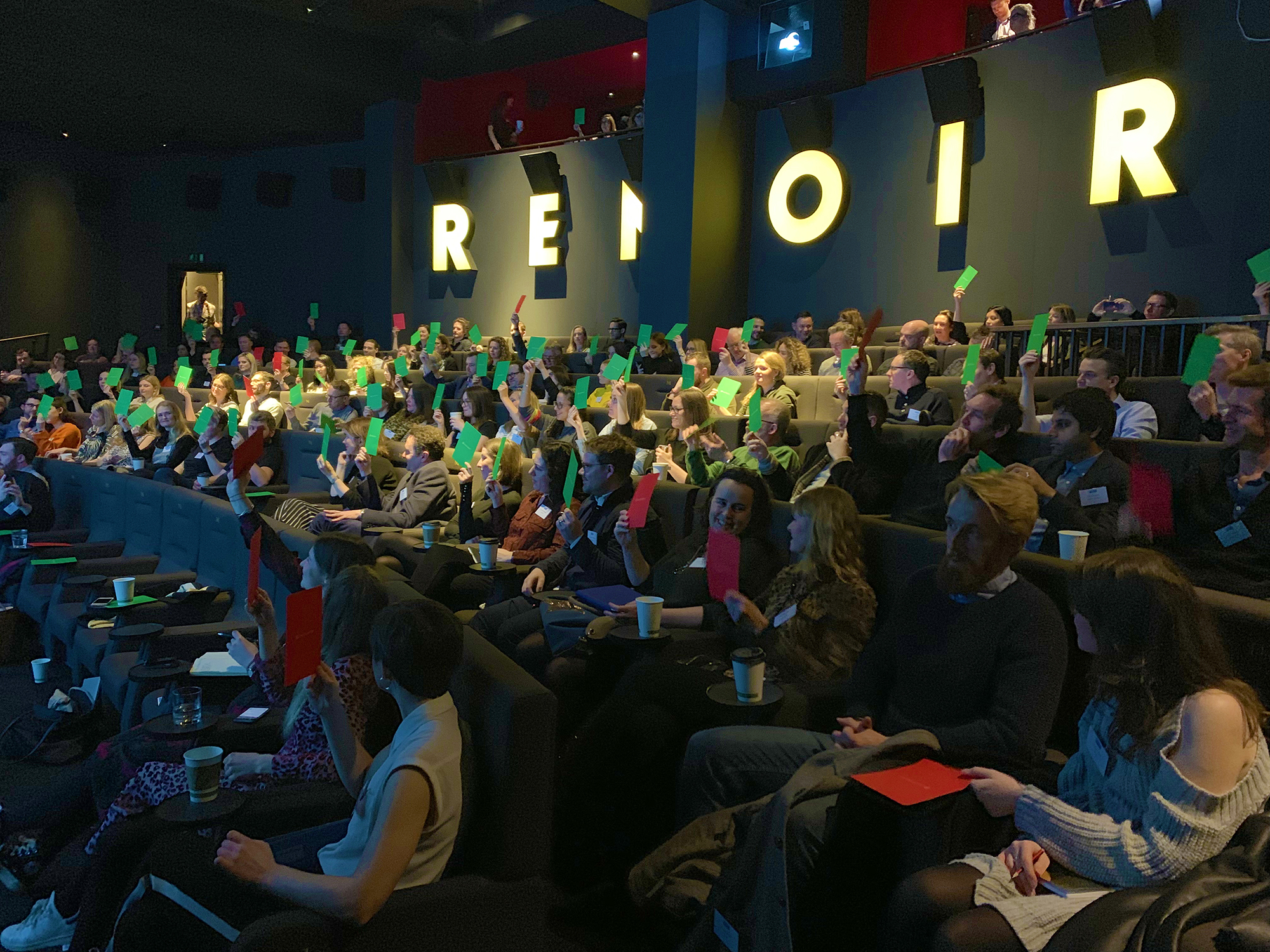 So, job done – agency brands weren’t doomed after all. But we didn’t pack up and get a coffee just yet. We stuck around and talked to our panel about how this can stay the case. And why agency brands remain hugely important to the industry.

#1 - Nobody needs more of the same

In a survey we ran pre-event, 63% of brands and 77% of agencies said the industry, in its current crisis of confidence, needs more strong agency brands. This was a bit of a startling statistic when we’re always hearing how congested the marketplace is.

But the question here is one of quality, not quantity. Or, as VCCP’s Charles Vallance said, “I don’t know whether it’s a volume game. I think it’s a talent game.”

Not just talent, but point of view too. A difference.

A point of difference is at the foundation of a brand … That’s why you exist – not to be the same.

The competitive points of view agencies have; that brands can “buy into” as John put it, undoubtedly holds allure for marketers. The BBC’s Kerris Bright agreed. “We’re all busy solving clients’ problems, but you neglect at your peril clarity on what you are and why you exist. If you do that inside, it’ll be more clear outside.”

Founder of the youngest agency on the panel, Uncommon Creative, Lucy Jameson summed things up by saying, “I don’t think any of us need more of the same. I think there’s been lots and lots of research that’s come out over the last four years that says people wouldn’t give a shit if ¾ of brands died tomorrow. I think that’s true of agency brands and I think that’s because they’re not distinctive.”

Truly distinctive agency brands, with plenty of value to offer, is one thing there can never be too much of.

#2 - Principles are not just for the kitchen wall

It might seem at times like the principles of an agency or any organisation by that matter might seem a bit redundant. One step up from a motivational poster than hangs, hardly ever read, on the wall of the office or kitchen. But if agency brands are going to be distinctive, this can’t be the case.

Sir John Hegarty said how, “For me, agencies have a fantastic future so long as you’re understanding those core principles of what it is you’re offering a client.”

He elaborated, “This is why principles are fundamentally important. They give you a sense of now what should we do.”

Charles Vallance likewise sees principles as integral to what makes an agency brand...

It’s very difficult to disentangle practice and principle. [VCCP] launched because we thought we could do it better than anyone else – we wanted to make a better product with a better way of making that product. The two are interlinked. So, the principles were vital to our working approach.

Principles then are far more than just a mantra for agency folk. They are what an agency conveys to a brand – their approach, their personality and crucially, their difference. They can crystallise a business.

Yet, Lucy Jameson warned against them lacking integrity. Like every part of a brand, and so crucial to the heart of Uncommon, they must warrant commitment. “I get a bit bored with empty values-y ‘this is what we believe’ stuff. Just making sure there is some really fucking clear concrete actions and behaviours out the back of it.”

“We try and be all things to all people. And you can’t be. Well, you can be – you’re just very bland and boring.”

Sir John Hegarty didn’t split hairs on that one. And he had a point. If you know what your agency is about and become precious about what it wants to do, then you’ll inevitably become picky about your clients.

Saying no mightn’t be the most obvious thing for an agency to do. But as Kerris Bright shared, there can be great power to it.

It builds respect and trust. You value honesty which is a group of people saying we don’t think we’re the right people to solve your problem.

After John cautioned that we are in a precarious industry so saying no wasn’t always an option, Lucy Jameson reiterated that “it is very, very hard to say no. What we have found at Uncommon is we are incredibly precious about deciding which things we are going to work on. The interesting thing is we have said no a lot over the last 18 months. Almost on more cases than less, people have come back to us.”

With agencies so often the ones bowing to brand demands, bending over backwards, it’s encouraging to realise that being picky won’t result in the shutters being pulled down on the agency.

Kerris Bright added that she’ll even consider the brands she could potentially join on an agency’s client list, thereby highlighting the importance of an agency scrutinising which ones are right.

“If I look at the company they currently have, does that look like a set of brands that feel like I want to be in the same company? Does the agency through working with that set of brands look like they are solving problems that look like they are going to be relevant for me … if I see someone solving problems for others brilliantly and I think they are good clients I’m more likely to think they’ll be able to solve my problems.”

#4 - Give talent a reason to stick around

Talent drain is something we see as a result of many industry ills. And to be blunt, without talent there’ll be no industry.

This sentiment was shared by Lucy Jameson who said, “At the end of the day, it’s about your ability to attract a disproportionate amount of great creative talent that actually means you’re going to thrive as a business long term.”

Charles Vallance also championed the importance of giving your workforce something to work for; to find their ambitions met within your organisation. He said, “You will not be talented unless you are given a chance to master your trade.”

If they can’t master their trade with you, then they’ll master it with someone else. And so, the potency of agency brands risks waning. Creating that crucial difference everyone says must exist starts to become a little trickier.

This is why Lucy says Uncommon “have thought hard about how our agency brand appeals to talent.”

Kerris Bright laid bare the reason brand marketers are interested in working with an agency.

“For me when I’m thinking who am I going to choose to be part of my team – they’ve got to bring capability that I don’t have.”

We get so wrapped up in rhetoric, this is a simple truth sometimes missed. Agencies have to bring brands something they don’t have, but something which they need. For Sir John Hegarty, this goes hand in hand with outsiderdom.

Great creative people are outsiders. They’re on the outside looking in.

For John, this is something that should be safeguarded at all costs, because “once they’re inside, they lose an element of that outsider aspect … The market will always try and homogenise you; always try to even you out. You have to fight that desire to make you like everybody else.”

Agencies should fight it too. It’s their outsiders who offer the value to brands.

You might say it’s utopic to suppose that multiple, impassioned outsiders can live in harmony within an agency culture. The word collaboration might, as it did John, send a slight shiver down your spine. But this is what some of the biggest, boldest agency brands seem to be doing.

Not denying the power of “letting people get on with what they’re really good at”, Lucy Jameson said just how important that “sense of friction is that lies at the heart of everything great.” But equally how egos must remain respectful, open to being challenged, and not simply shut doors.

Charles Vallance hit the nail on the head, albeit it bluntly, when he said, “Talented people don’t have to cooperate – because they’re talented.” But that “There is a certain type of person who loves and thrives on a cooperative environment and recognises that’s the way to be prolific and truly creative.”

It’s about finding such a person – and such an environment. Where the outsiders can embody individualism but also cooperate. A sentiment that extends beyond agencies to the best brand-agency partnerships also.