Good news: there is no such thing as ‘Blue Monday’

Brands are offering consumers escapism and reasons to be cheerful as an antidote to January blues.

Today is not the most depressing day of the year. In fact, Blue Monday was a marketing strategy dreamed up by the now-defunct Sky Travel agency to sell more holidays.

Yet year in, year out, it generates both headlines and advertising campaigns. 2023 is no different. For while there is no such thing as ‘Blue Monday’ there is no denying January is the time when consumers look to make plans; from holidays to health, January affords a unique opportunity to choose change.

In the wake of the ‘permacrisis’ and the post-Christmas credit card bills hitting harder in the wake of the cost of living crisis, it is perhaps no surprise that brands are looking to sell consumers good news and escapism.

Yet arguably many campaigns have lost their positive messaging by dwelling on the data which reflects the reality of our lives. From holiday companies lecturing people that they don’t take enough holiday, to the ‘new year new you’ messaging favoured by health brands; the simplicity of an uplifting message is often lost to complexity.

It’s a fact which makes the Feel Good Club’s uplifting outdoor messages cut through in a cluttered marketplace. The inspirational Instagram account led by Kiera & Aimie Skillen has launched motivational posters and billboards located across Manchester, Liverpool, Sheffield and Birmingham.

The strong and uplifting messages will let people know they are not alone in this gloomiest of seasons, and each poster has a QR code directing to the Feel Good Club website where those scanning can send a free postcard to a friend or loved one with the same message, with the simple, yet nonetheless important aim of spreading cheer across the UK.

Kiera Lawlor-Skillen, Co-founder of Feel Good Club, said: “Every year for the last three years we have partnered with Jack Arts to spread some positivity during the most depressing month of the year. We originally started during lockdown when people couldn’t leave their area and focussed on locations with no green spaces, but this year we wanted to take it further with the pass it on campaign.”

The posters have been made in partnership with Jack Arts, the creative street advertising specialist. Feel Good Club has also launched its first-ever pop-up shop at McArthurGlen Designer Outlet Cheshire Oaks. Guests to the pop-up will be asked to write down something they are worrying about, or want to let go of, and then leave it behind them in the store, displayed on a huge wall on the pop-up interior. The activation seeks to help visitors deal with some of the feelings of anxiety and isolation associated with keeping things to yourself or hiding.

As while it might not be the most depressing day of the year, it is nonetheless a time of significant challenge and pressure. This simple and uplifting campaign is a powerful reminder of the ability of creativity not just to brighten the mood, but lighten the load. 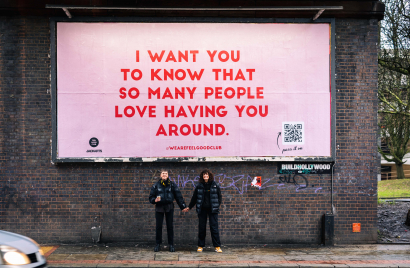 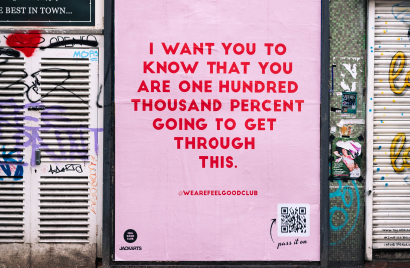