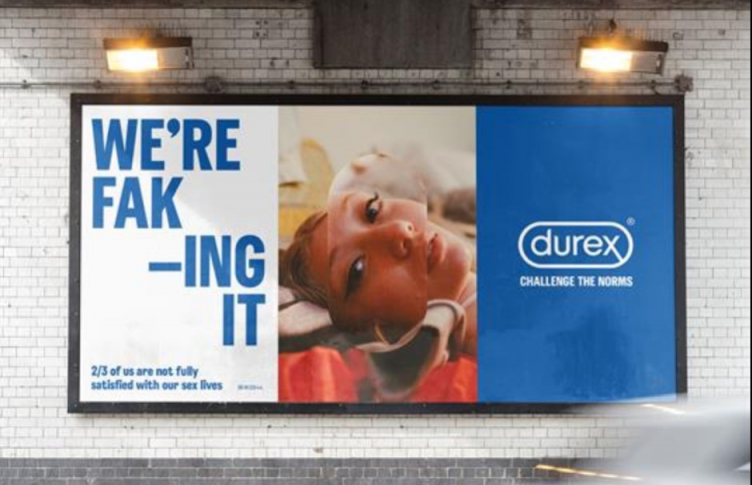 In 2017, Durex conducted a global sex survey, asking 29,000 people questions about sexual taboos, preferences and concerns. It set out to explore how sex lives are evolving around the world, and to establish how people think and feel about sex and what impact that has on the rest of their lives.

This Valentine’s Day, Durex want to challenge sexual norms and move away from previously stylised depictions of sex, citing the unsustainable amount of pressure that people are put under from the media, dating apps and their peers. The brand have released a new visual identity and positioning from Havas London, ‘Challenge the norms’, that proposes more positive and inclusive attitudes towards sex.

The campaign’s aim is to normalise sex for everyone, no matter how it looks; to open up the space for honest conversation and ensure that no one feels excluded from it. The open letter released this Valentine’s Day wants to tackle the idea that good sex only happens on special occasions and challenge rather than enforce societal sexual conventions.

On a day when red roses pile up on office desks and shops sell out of heart-shaped confectionary, Durex’s campaign is a refreshing one, particularly from a 91-year-old brand that has historically talked about sexual safety, not satisfaction. It’s an acknowledgement of both the pressures society places on our sex lives, and a reminder that we can choose to cast them aside in favour of a more positive outlook. As the letter reads, “Worry less about how it ‘should’ look. Celebrate how it can feel.”

A product like Tesco's plasters in three skin tones demonstrates the power that can come from listening to a community and understanding their everyday lived experience.

Matt Clarke, Client Director at Walker, is our South Coast tour guide, showing us some of the sights, & explaining why more and more people are swapping city living for a healthy dose of sea air, down in sunny Bournemouth.