The Internet of Eyes and Ears

Our phones, and the super computers they house, can now see and hear as well as they can read and listen. This is transforming the way that brands can use this technology to help assist us in our everyday lives.

The technology research firm Gartner has long been predicting that, by 2020, the average person will have more conversations with bots than with their spouse. These bots live within our smart phones, devices that are always with us, in our pockets, and which contain unlimited information. A smart phone can give us an answer instantly, as perhaps a spouse cannot.

Voice recognition software is one of the most powerful areas of development as we see Google Home competing with Amazon’s Alexa and now Apple Home entering the virtual assistant race. We can talk to computers like never before. Voice is no longer just in smart assistants but in many of the everyday products that we use from TVs, to ovens, washing machines and even the bin.

“Globally, 43% of regular voice tech users say they love their voice assistant so much they wish it was a real person,” revealed JWT’s Future100 report. You may choke out a laugh in disbelief at that statistic but we've seen this sentiment materialise in films like Her, where the protagonist falls in love with the woman who voices his computer. As announced last year, Apple were hiring Health and Wellness software engineers with a background in psychology or counselling to help ‘people have serious conversations with Siri,’ an indication that our voice assistants are only going to become more anthropomorphic, the more technology advances.

What might the future of the virtual companion look like? In Japan, Gatebox, a holographic voice assistant, wakes you up, texts you when you’re at work and welcomes you home after a long day. It even reminds you to take an umbrella if it's raining. The assistant, named Hikari, lives within the screen and the cameras, sensors and microphones on the outside of the device allow her to be more 3D companion than faceless voice assistant. Indeed, the research and consulting firm Ovum estimates that the native digital assistant installed base, i.e. the number of devices installed, will surpass 7.5 billion active devices by 2021, which is more than one per person on the planet.

Ten years on from the launch of the first iPhone, we now have a smartphone that unlocks itself by scanning our faces. We are fed adverts on our social media feeds that correspond to the conversation we had earlier that day. Our phones, and the super computers they house, can now see and hear as well as they can read and listen. This is changing our lives completely, but it’s also transforming the way that brands can use this technology to help assist us in our everyday lives.

It is no longer the Internet of Things but rather that of Eyes and Ears.

Hostelworld lets you speak to the world

Travel is an experience than many believe should take you out of your comfort zone, introducing you to cultures, people and languages that you have no prior knowledge of. And, for those who speak English, it is usually arrogance that encourages us to assume that everyone we meet will speak some semblance of our native language. And many do. But how to communicate with new people you meet and understand their world if you share no common language?

Hostelworld realised that 72% of its visitors are travelling alone and they’re put off travelling altogether because of the language barriers. To address this problem, Hostelworld worked with Lucky Generals to introduce Speak the World on their app. The new feature allows the user to instantly translate up to 43 languages, eliminating these linguistic barriers in real time.

The app is instant and easy to work. Users simply select their language and then speak into the phone. The app can then translate both in audio and text into languages including Bengali, French, English, Hindi, Romanian and Thai.

Speak the World is powered by Google Cloud Translate Technology, which allows for intuitive language recognition and full sentence translation. The technology users broader context to allow for the most accurate translation.

The app can also turn into a comedy mouth complete with digital moustache or robot face, that also helps to provide the user with a welcome icebreaker when attempting to make conversation through a smartphone.

The comedian Phil Wang put the app to the test in Indonesia when he asked, does humour translate? And, more specifically, does British humour translate? Wang promoted the app’s functionality on YouTube with his short film while Hostelworld ran a four-week Universal App campaign.

The video received 13 million views on YouTube, while the app saw a 259% increase in installs, turning it from a simple booking app into an essential travel companion. 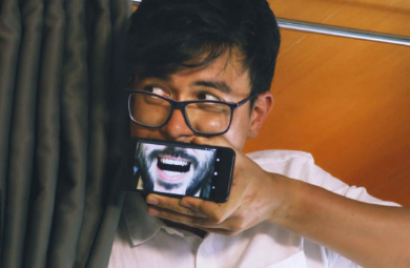 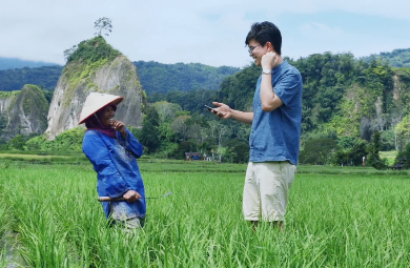 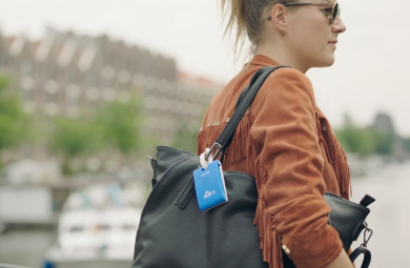 The smartphone is the modern day traveller’s closest companion. But what do you do when you’d rather be looking around a city, not down at your phone? The Dutch airline KLM designed an audio luggage tag that visitors to Amsterdam, KLM’s hometown, can attach to their bags. Equipped with GPS and a speaker, the Care Tag provides the visitor with location based city tips, such as how much a taxi costs, where to lock up a bike or which streets to watch out for when crossing. The tips, voiced by the KLM crew, allow the traveller to forgo their smartphone and rely solely on a digital, speaking tour guide.

Dine in style, with a virtual companion

Dining alone is for some a luxury. A stolen moment of peaceful bliss. But for others, it can be an angst ridden hour as, smart phone in hand, you attempt to look busy. But a café in Japan has come up with a solution: your very own virtual companion. The Blue Leaf café in Sendai provides customers dining alone with a virtual AR girlfriend for the evening. This is no ordinary girl however but the world’s most successful virtual idol, Hatsune Miku. The café had a selection of pre-programmed smart phones which customers could book to dine with. They could then enjoy Hatsune’s company for an evening. 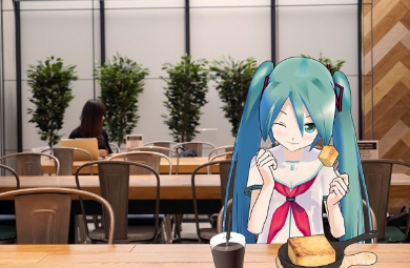