McDonald’s Norway tells consumers to ‘take away their take away’

The fast-food chain is taking a stand against littering with a creative that features discarded packaging.

The McDonald’s golden arches is one of the most recognisable logos in the world but it's a logo that people are able to spot beyond the walls of restaurants, billboard advertisements and packaging to the disregarded litter that dirties up the streets. Taking ownership of the issue of littering, in its latest campaign Mcdonald's Norway is showcasing the ugly side of its packaging and encouraging customers to get involved in creating cleaner streets.

Take away packaging is said to be the third-largest source of littering in cities and as Norway’s largest takeaway restaurant, McDonald’s Norway is taking ownership and recognising itself to be a substantial part of the problem. This new campaign sees the brand build a toolbox to find solutions for littering in collaboration with agency partners NORD DDB, WergelandApenes and OMD.

"We’re responsible for one of the biggest and most visible parts of littering. We’re definitely not pleased when we see trash from our restaurants lying around. This is a big problem for our communities, cities and the environment. With our size and influence, we can do a lot better than we do today", says senior marketing manager Mari Husby in McDonald’s Norway.

A new advertising campaign developed by NORD DDB, focuses in on the iconic Mcdonald's logo but showcases it instead on the disregarded packaging on the streets. With the message “take away your take away”, the restaurant chain encourages all McDonald’s lovers to help them reduce littering.

Photos of the “iconic trash” from McDonald’s lying around in the streets of Oslo has been captured by the photographer Jói Kjartans. Images are shown in print, social media, OOH displays and McDonald’s trays in order to reach as many customers as possible. 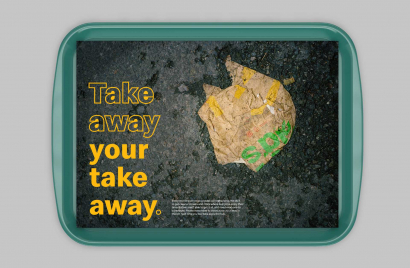 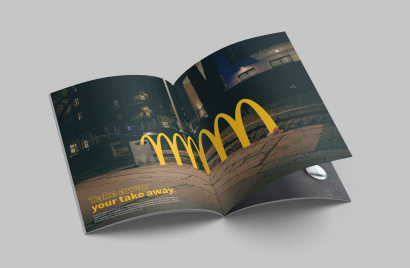 The fast-food giant has also placed trash cans next to OOH displays so that the iconic McDonald’s arches can be used as a guide toward the rubbish bin encouraging customers to dispose of their leftovers and packaging properly.

To help contribute to longer-term change, Mcdonald's has also invested in environmental measures to showcase its commitment to the cause, Husby explains;  "As a major player, we have both a great responsibility and an enormous power to contribute to change. In addition to driving attention to the issue through mass communication, we’ve joined a pilot project with Keep Norway Clean with the aim of preventing unconscious littering and we’ve initiated dialogue with politicians, stakeholders and competitors. Our restaurant employees are also out in their communities cleaning the streets these days. Together we hope to make a difference.”

By not shying away from the issue of littering and positioning disregarded packaging front and centre in the creative, McDonald’s is boldly taking ownership and making positive steps toward a cleaner future for its customers.