The team behind this year’s TfL Diversity in Advertising Award-winning campaign from Replens and the Gate on celebrating the joy of intimacy in older age, sharing a bold vision and bringing about change on a big stage.

Subjects are rendered taboo because of the shame they are wrapped in and the absence of airtime they’re given. It’s why there are gaps in authentic representation across the communications industry because for so long these gaps were filled with the taboos which remained unrepresented and unsaid.

One such taboo is showcasing older people and sex in advertising, in showing them in all their power and glory rather than inching to the end of their lives. This is particularly poignant when we come to the typical portrayal of older women in advertising, encouraged to ‘fight the signs of ageing’, to not accept the fate that life has dealt you to look like you’ve lived it.

“It’s one of the great taboos that needs tackling in our society and it’s an area where stereotypes remain very stubbornly entrenched,” explains Kit Altin, CSO of the Gate.

Instead, what it should be about is joy, and people whose lives are still filled with it, even if they don’t see themselves reflected in the imagery, communications and advertising they see around them. Indeed, research from a study funded by Age UK found that more than half (54%) of men, and almost a third of women (31%) over the age of 70 revealed they were still sexually active, with a third of these men and women having sex frequently, ‘frequently’ meaning at least twice a month.

It was this beautiful, celebratory joy that Altins explains was at the heart of the agency’s award-winning new work for vaginal moisturiser brand Replens. The partnership between agency and brand resulted in the creation of a breathtaking campaign, ‘Sex Never Gets Old’ that saw the team awarded first-place at the 2021 TfL Diversity in Advertising Awards. The theme for this year’s award was the representation of the over 50s and, says Michael Benson, it was something the creative partnership wanted to directly address.

[That] really beautiful kaleidoscope of human connection is reflected in the imagery. You can see and feel the emotion there. And it’s a world away from those category norms.

Change on a big stage

For Altin, entering the competition with a campaign such as this was vital because many conversations around the representation of older generations are often hidden in the shadows. Campaigns are created as small online videos, often tucked away from the mainstream.

This award offered the team “an opportunity to drive real change,” Altin explains. “That was really appealing for us. Because of the nature of the prize, it’s an opportunity to drive change on a big stage,” she adds. The larger scale this award offered was also important to the team as it allows each and every one to feel seen, to feel like their experiences are being authentically reflected. The mass-reach enables broader societal change to occur.

These oft unspoken female ‘issues’ are what Benson says are at the heart of the work Replens is doing, tackling the misinformation and taboos around it. The brand, he says, is “tackling those unspoken issues that women face on a daily basis. Our feeling is that they shouldn’t be unspoken. We are normalising normal issues. We want to normalise, normal feelings. People do get old; they do stay in love and they want those intimate relationships with their loved ones.” Replens wants people to feel that “there is nothing wrong with that, there is nothing taboo about that,” Benson adds.

That’s why this campaign challenges the norm by showing a diverse range of older people as sexual, intimate beings. The couples depicted range in ethnicity, sexuality and age, all shot in emotional portraits capturing the sheer warmth and happiness that comes from intimacy between loved ones.

“When you see how people have talked about these things, it’s always in hushed tones and it’s always about a medical issue,” Benson explains. But he continues, by defining the symptoms women can have in later life as solely medical, in an undertone, “sometimes can almost reinforce that taboo,” he says.

“It’s really important that this isn’t seen as an issue,” he continues. “All bodies get older, and bodies change...this is all normal.”

Replens, says Benson, takes a different approach, instead choosing to have a positive stance around the problems women might be having and offering them practical solutions and education. This positivity, Altin says, underpinned the brief the agency was given which was, she says, “to do the opposite,” to the stereotypes that had been perpetrated for years and instead, “to be bold, to be direct.”

This is where the powerful photography was born from, a desire Altin explains to create a campaign that was “beautiful and celebratory and joyful.” It’s this joy and emotion around the imagery that Altin says the team are proudest of achieving. Because this emotion came through the insights the team gathered about the way that people over the age of 50 felt about intimacy.

“There’s a whole canvas of connection there,” she smiles, demonstrating that there is so much more to intimacy than just the act of sex itself. The campaign set out to capture a feeling of warmth that everyone could relate to, says Benson, whatever your age. “[That] really beautiful kaleidoscope of human connection is reflected in the imagery,” says Altin. “You can see and feel the emotion there. And it’s a world away from those category norms,” she adds.

“No matter what age you are, you warm to [the campaign],” says Benson, who sees at the heart of the work a point about “embracing your age in a positive way”. He explains: “That doesn’t mean be old. That means live life to the fullest while you are older.” This flies in the face of much advertising either directed towards or featuring older people, often encouraging this demographic to take a back seat, to relax and take it easy. To exist rather than live. This creative work offers a powerful and vital alternative to that narrative.

If you don’t talk about it then you will never reassess your views on it. We’re prompting that conversation or at least promoting the thought.

Campaigns do not win the TfL Diversity in Advertising Award by showcasing tired ideas that've been seen before. The work that wins, starts conversations rather than simply continuing them. And the Replens campaign is no exception. It comes, explains Benson, from brand and agency “sharing a bold vision to get [the work] executed.” He continues that from the brand, it’s about having an “openness to powerful ideas...otherwise great ideas might die too early,” while the agency’s job is “to push and help us think more broadly.”

Altin adds here that Benson is a “defender of great ideas and bold ideas…the first one to fight for it,” a quality that allows for truly great marketing and communications to be made. Because there might’ve been many who found the risk of running these images too great. For Benson, it was too great a risk not to.

There is boldness at the heart of several of The Gate’s campaigns for Church & Dwight, Replens’ owner, which has seen the agency team run a campaign for haemorrhoid cream Anusol, ‘Bums the Word’ for the last four years. The campaign uses both humour and creativity to tackle what historically would’ve been seen as yet another taboo. “I’m especially proud to have helped create work that is both creative and effective for these categories,” says Altin.

For Benson the continuation of the Replens campaign comes in the form of education, in getting more engagement with the category. He says many women neither recognise the symptoms of ageing and the menopause nor that there’s something they can do about it to allow them to have, as Benson says, “a healthier, more fulfilled life”. Of the winning campaign he says that “this is such a strong idea that it gives us permission to continue to be open, to be bold about our communication,” that he can see the work running for a while.

Benson’s aim with the brand is “to be bold and upfront but still with that warmth and care”, to dismantle the shame that has meant conversations around older women’s bodies, particularly when it comes to intimacy are so taboo. He adds that “these things will probably always remain private, but they shouldn’t be a problem.” Because, as Benson explains, “if you don’t talk about it then you will never reassess your views on it. We’re prompting that conversation or at least promoting the thought.”

Because to dismantle taboos, you have to provoke conversation, or at least as Benson says, the thought that leads you there. ‘Sex Never Gets Old’ is a reminder of what powerfully brave and bold marketing can achieve, of what happens when like-minded marketers decide to dismantle deeply entrenched taboos by offering people a different side to the same old coin through the creation of a beautifully celebratory and joy-filled series of imagery that captures all there is to cherish about old age. 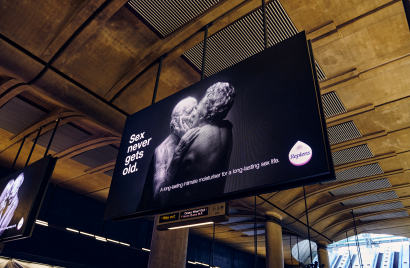 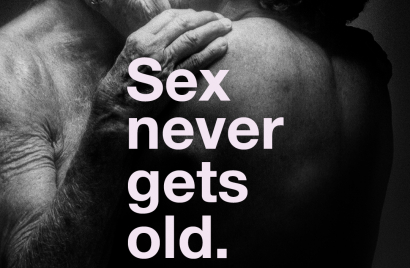