Through a partnership created by FCB Inferno, the businesses are aiming to upskill and educate vendors whilst also emphasising the importance of online communities.

For all its faults, technology has been a vital facilitator of connections during the ongoing pandemic. It was always the case but since the country has been confined to the four walls of their homes and the streets of their local area, it is to the internet we have turned, and those platforms designed to both foster and enable connection.

While many of us have been able to continue working and connecting from home, there are those whose livelihoods have been almost entirely destroyed by lockdown. One such group are The Big Issue vendors. With next to no footfall on our streets, opportunities to connect and engage with consumers are few and far between.

A new partnership between The Big Issue and LinkedIn, concepted and managed by FCB Inferno, sees the development of a pilot scheme to support nine of the magazine’s vendors by creating an online profile for each of them.

The ‘Raising Profiles’ campaign has been designed to digitally empower Big Issue vendors by providing them with new ways and opportunities to connect with their customers. The campaign’s aim is to reframe the way Big Issue vendors are seen, instead positioning them as small business owners selling the magazine.

The Big Issue structure works through vendors buying copies of the magazine for £1.50 and selling them to the public for £3, keeping the difference. In this way the magazine provides them with the means to earn a legitimate income. The partnership with LinkedIn, whose community has just reached 30 million in the UK, aims to take the vendors into a professional space, giving them access to a platform which reinforces that they are working for a living as well as allowing them to increase their sales in the face of the ongoing challenges in the COVID-19 pandemic.

Paul Cheal, Group CEO of The Big Issue Group, said: “COVID-19 has changed everything for everyone, but its impact has been keenly felt at The Big Issue. All earning potential was stripped from our 1,700 regular vendors who made their living selling The Big Issue on the streets of the UK.” 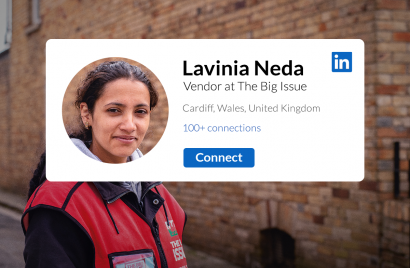 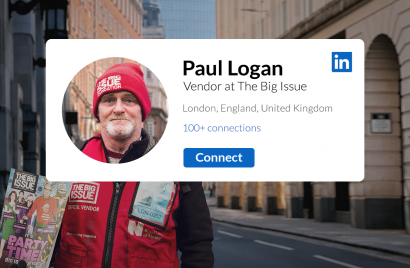 The nine vendors have all received specialist and bespoke LinkedIn training from LinkedIn volunteers to help them develop a degree of digital confidence to reach a new customer base online. The purpose of this campaign is to digitally empower the vendors to find new opportunities and engage with a new and supportive community, one they have been lacking as the UK’s streets emptied. The ambition is to onboard more vendors onto the scheme throughout the year.

Cheal noted that “as we find ourselves in our third national lockdown and, with high streets likely to be quieter for the foreseeable future, we are fully focused on empowering our vendors with the digital skills they need to connect with their customers online.”

As part of the training, the vendors were shown how best to disseminate the news and stories found in the magazines to share with their network. They have also received tablets donated from Dixons Carphone to help them access their online profiles and training.

One of the most pressing concerns for people during the ongoing pandemic has been the increasing sense of social isolation. Without the familiar daily interactions, many people are cut off from the communities they have so depended on, both financially and emotionally.

The purpose with this campaign is to show Big Issue vendors that this feeling of isolation can be eased by using the platforms technology has built to connect online. Josh Graff, UK Country Manager at LinkedIn says: “The pandemic has had an enormous impact on the livelihoods of Big Issue vendors and wreaked havoc on their ability to earn an income. We’re delighted that this pilot programme will give vendors a new, safe, and much needed, opportunity to reconnect with customers and sell their magazines.”

Throughout the pandemic, the Big Issue has been distributing cash and supermarket vouchers as well as helping vendors pay their bills while they cannot sell the magazine on their pitches. The organisation has also pivoted to launch an app, has sold the magazine in major retailers for the first time in its history, launched an appeal and built a subscriptions business.

The partnership with LinkedIn is an extension of the work The Big Issue is already doing in upskilling vendors, from selling subscriptions online to supporting them to accept cashless payments. As Cheal adds, “The partnership with LinkedIn, which we welcome wholeheartedly, will not only help the vendors sell their magazine again, but it will also ease the feeling of social isolation experienced over the past year, allowing them to reconnect with their customers and community.”

The Big Issue exists to dismantle poverty by creating opportunities and the work they have been doing with FCB Inferno over the past few years does just that. An ongoing campaign ‘Change Please’ which is now entering its sixth year, trains vendors up as baristas to run coffee carts while ‘Remember Me’ launched in December 2020 was the business’s first ever Christmas appeal, coming in response to the ongoing pandemic.

Perhaps one of the more vital campaigns and one which this latest partnership builds from was ‘Pay It Forward’. Backed by Monzo, the campaign worked to create the world’s first re-sellable magazine and integrate vendors into the financial system. Unique QR codes were created and printed onto the front of each magazine to allow each reader who had the magazine passed to them to scan and pay the original vendor.

With the ‘Raising Profiles’ campaign, LinkedIn and The Big Issue offer up an unexpected but totally logical partnership, one that puts the individual vendors right at its heart. It has been designed first and foremost to create economic opportunities for those who need them most and to empower vendors to become more digitally savvy. The partnership harnesses the parts of the internet that many may be turning away from to instead remind people that there are supportive communities out there, just waiting to be built. 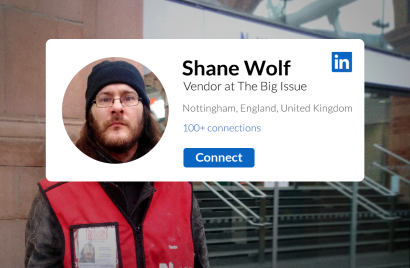 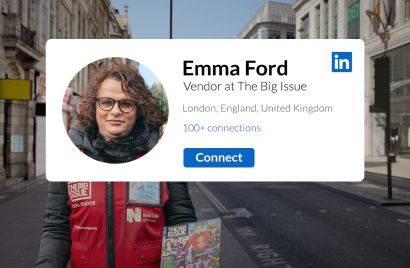