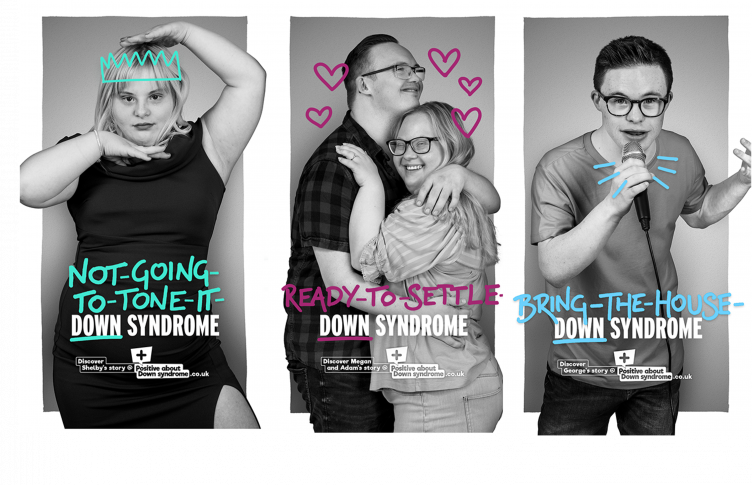 Positive About Down Syndrome

The start of a new life should be a positive experience. But if your child is diagnosed with Down syndrome, it’s not. Current healthcare protocols mean expectant parents are offered termination in the same conversation as diagnosis.

The campaign launched to coincide with October’s Down Syndrome Awareness Month and the agency’s photographic campaign features fourteen portraits of fourteen remarkable people. Portraits include George Webster, the  BAFTA-nominated TV presenter with Bring-The-House-Down Syndrome, to Millie Anne Prelogar, an influencer with ‘Never-Slowing-Down Syndrome’. The straplines beautifully challenges negative stereotyping by capturing the personality of each person.

The campaign has been supported by a significant contribution of media space. While The You-Can’t-Put-Me-Down Syndrome exhibition persuaded MPs and parliamentarians to support the pledge: “I support the demand to end the current practice that medical practitioners offer an expectant parent their options including terminating, based purely on a diagnosis of Down syndrome.”

Over 60 parliamentarians including Ian Duncan-Smith MP, Dame Meg Hillier MP, and Gareth Williamson MP signed the pledge with support from Prime Minister Rishi Sunak, who met team PADS moments into his new role.  All this during one of the most turbulent weeks in Parliamentary history.

The social campaign landed a hugely positive response from across the entire Down syndrome UK community, with tens of thousands of visits to its website.

According to data from Mindshare, over 30 million impressions have been registered across Sky Sports, Sky News and Metro websites. The campaign was also featured on BBC News and the Metro cover.

This long-term strategy will see VMLY&R Commerce partner with PADS in pursuit of further pledges from policymakers to change healthcare protocols. The campaign will feature many more stories from the down Syndrome community brought to life to create the change.

Etty Flynn, Creative Lead at VMLY&R Commerce, explained: “The community doesn’t see itself as challenged. Nor should anyone else. Our aim is to showcase the positivity, joy, drive and determination of the community– and – create visibility, engagement and momentum to carry the message to Parliament. It’s an incredible collaboration across the industry. We’re on our way.”

A timely reminder of the power of representation to not just change the narrative, but change the policy, which in turn will change the lived experiences of so many.