#FundAFuture shows the power of creativity for social good

Beam, the online platform which raises funds to support homeless people back into the workplace, has launched a new campaign, created by Good Brains for Good Brands.

Beam, the online platform which raises funds to support homeless people back into the workplace, has launched a new campaign, created by Good Brains for Good Brands.

The #FundAFuture campaign will see an outdoor campaign run across hospitals, care homes, supermarkets, offices and building sites across London. The campaign will highlight the need for staff in these vital sectors, and the opportunity for homeless people to fill this gap.

Alex Stephany, CEO of Beam, explains: “For so long, the homeless have been considered a drain on our economy. But they are people who want to be part of the solution to the UK’s economic recovery, and they are. We just want the UK to know that.”

Montana Gerry, Head of PR at Beam, added: “A lot of campaigns in the charity sector, particularly when dealing with issues such as homelessness, focus on hard-hitting, guilty-tripping content. What we like about this Fund A Future campaign is that it breaks from the status quo by sharing a positive yet simple message of hope. At its core, this campaign works hard to change the supporter-beneficiary dynamic from 'I pity you' to 'I believe in you', which couldn't be more important than at a time like this.”

Beam has crowdfunded job opportunities for 270 homeless people, 87 of whom have started work, with a larger group still in training. It hopes to place 300 homeless people into roles by the end of the year.

The campaign was created by creatives Cathy Hutton, Jana Pejkovska, Rob Donaldson and Joe Dennett, and designed by Dan Treder.

Cathy Hutton explained: “This crisis has opened the skills gap, so our work was to highlight this and state that the homeless want to work hard to close it. By backing a homeless person and investing in their potential, you will be investing in the UK.”

The team all gave their time for free to the campaign, which was created by Good Brains for Good Brands, the pro-bono collective launched last month by the talent specialists UNKNOWN. The specialists put their network into action by bringing together some of advertisings most talented, yet currently furloughed or work-free, to support the struggling charity sector with their creative expertise. The current lack of fundraising events and sponsorship deals is leaving the sector with a £4bn hole in its funding.

Ollie Scott, the Founder of UNKNOWN, added: “This first piece of work is testament to the fact that Good Brains for Good Brands works, and for us what is more important is that #FundAFuture works even harder for Beam.”

Over 100 creatives signed up to the Good Brains for Good Brands collective, underlying the power of the creative industries to be a force for good in the midst of the global crisis. 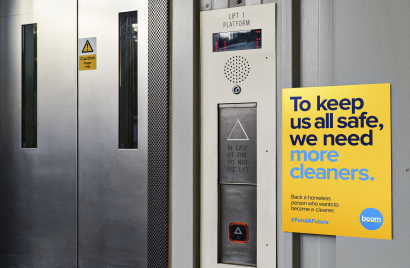 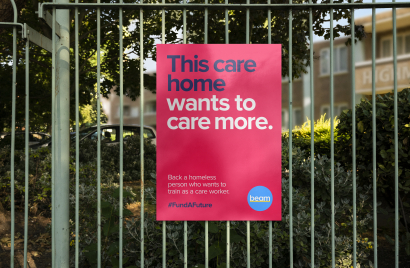 David Nobbs, Managing Partner and Head of Consumer at The Grace Blue Partnership on the price of talent and the truth about ‘the great resignation’.

M&S brings to life its Christmas ad at Waterloo Station

One Step Closer to Home

Why Kindness is the answer to ’the great resignation’

In the midst of employees and consumers alike choosing change, new research from The Kindness Corporation underlines why kindness is the industry’s secret weapon.