'It's Everyone's Journey' is the Department for Transport’s drive to creating a more inclusive transport system for passengers with disabilities, particularly those with non-visible impairments. 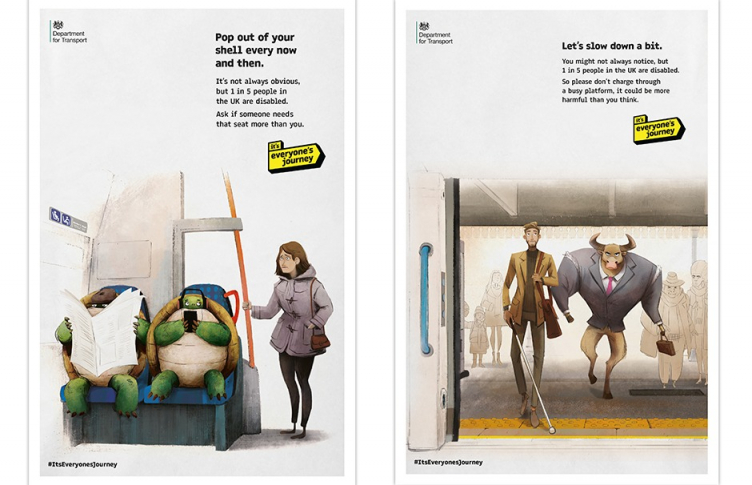 DFT aims to create a more inclusive transport system for disabled passengers, especially those with non-visible impairments. 'It's Everyone’s Journey' campaign is full of empathy designed to create a more considerate public transport environment for everyone.

One in five people in the UK have a disability, even if often that disability isn’t visible to those around them. Within the UK, people with disabilities travel up to a third less, while one in four say negative attitudes from other passengers prevent them from using public transport.

This means millions of people are unable to travel, reducing their access to employment, healthcare, education and social activities. A new campaign from the Department for Transport aims to highlight this insight, whilst simultaneously encouraging passengers to show empathy for those around them.

Created by VMLY&R, ‘It’s Everyone’s Journey’ includes a series of animated films, print and radio slots that encourage people to slow down, to charge less and to think of others instead of just turning away from someone in need. They are part of the Department for Transport’s drive to creating a more inclusive transport system for passengers with disabilities, particularly those with non-visible impairments.

In animations created by the agency in collaboration with Nexus Studio’s Oscar-nominated directors Smith & Foulkes, commuters transform into cackling hyenas, a charging bull and a turtle; which hides inside its shell instead of giving up its seat. The animals offer a visual metaphor for how behaviour can shift when people take public transport.

The campaign highlights a man who is blind navigating the underground, a woman with autism who finds an unexpected delay particularly difficult and a man who finds the noise at the back of the bus overwhelming, even if he might not show it. The soundtrack is an original song from Siren, Factory, which points out that it only takes a little bit of effort to be a whole lot nicer to those around you.

Many travellers are guilty of it, and often in the face of the grind of the daily commute, kindness gives way to impatience. When we’re exhausted and finally manage to grab that elusive seat, it is all too easy to overlook the needs of those around you. Headphones go in and eyes close, oblivious to those who might be more in need around you.

With this campaign, the Department for Transport is asking people to show empathy, to have an awareness of others who might be struggling to navigate what many people don’t even need to think about. A welcome reminder of the daily need to burst our own bubble to consider the wellbeing of those around us.