Fewer commuters, more people opting to walk or cycle and less planes in the sky have led to lower levels of pollution recorded across London for the first time in years. 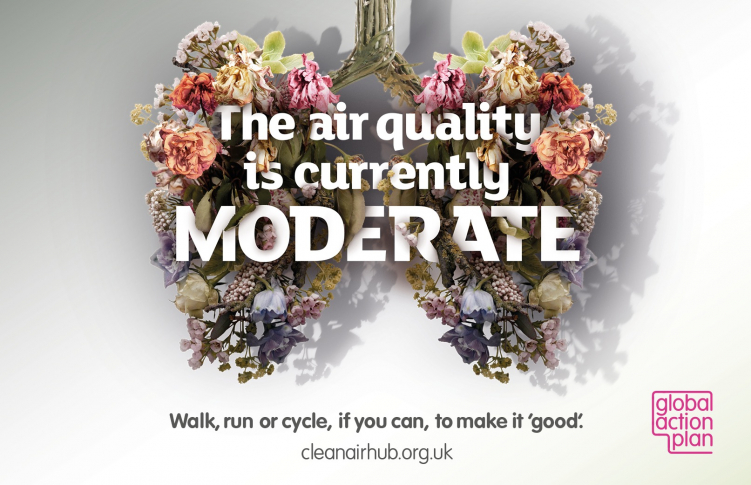 To prevent the return of pre-lockdown air pollution levels, our real-time ‘Breathable Billboard’ uses flowering lungs to visualise air quality. The lungs react to local ‘Daily Air Quality Index’ data - blooming when pollution levels are low and withering when they are high.

Perhaps one silver lining to come out of the devastating coronavirus crisis is the positive impact lockdown, and the subsequent shift in working and travel habits, is having on the environment, particularly in large cities. Fewer commuters, more people opting to walk or cycle and less planes in the sky have led to lower levels of pollution recorded across London for the first time in years.

To encourage people to protect the cleaner air, Wonderhood Studios worked with Global Action Plan to create a ‘breathable’ billboard that tracked and registered the air quality in London. The billboard reacted in real time to localised pollution data from the ‘Daily Air Quality Index’ based on the billboard’s location.

The billboard contained a pair of flowering lungs whose health and vivacity corresponded to the pollution levels. When the levels were low, the lungs flowered bright and clear. But when levels reached illegal or dangerous heights, the flowers withered and died and the messaging changed in kind.

Pre-lockdown, the illegal air pollution levels in UK towns and cities was an environmental health risk causing up to 36,000 deaths in the UK each year, according to Global Action Plan and EDF data. At the height of lockdown however, No2 levels were 20-30% lower than ‘normal’ nationwide, with roadside emissions halved in places. With significantly reduced numbers of cars on the roads, the air quality was the best it has been in decades.

The campaign is designed to direct people to an online platform, cleanairhub.org.uk which helps to educate and inform people about how they can keep air pollution levels down, with a predominant focus on the travel choices people make.

Larissa Lockwood, Head of Health and Air Quality at Global Action Plan, explains: “In lockdown we literally woke up and smelt cleaner air. While air pollution is largely invisible, we have now experienced what it feels like to have cleaner air, and know what we can personally do to keep it this way by using the car less, and walking, cycling or working from home more often instead.”

The power of OOH is not to be underestimated in capturing people’s attention and having a significant impact on behavioural change. While we perhaps tend to overestimate just how much behaviour will shift for the long-term after a crisis, there can be no doubt that campaigns such as these will help people to be more conscious about their travel choices and protect the air quality of the city.

“Playing it safe is the riskiest thing you can do”: Effie’s Ideas That Work 2020 Summit

Nicola Kemp, Editorial Director at Creativebrief hosted a panel that explored what makes for effective work and how marketers should be operating in an ever-changing communications landscape.

The UK Advertising Export Group’s ‘Made Global’ campaign is a rallying cry for the creative industries.