THINK! were looking for a vehicle or a person who could impart wisdom in a way that would mean an audience of young, male, new drivers would listen to and absorb it. Enter the Road Whisperer.

The Department for Transport’s THINK! approach to communications has been, for many years, to deploy shock tactics to reduce driving deaths and serious injuries.

The department’s latest research revealed that when it comes to male drivers, those aged 17-24 are five times more likely to be killed or seriously injured vs men over 25. And they’re typically a difficult to reach audience.

Bravado, rivalry and competitiveness within this group are as rampant as you’d expect. The chances of them revealing their inner-most thoughts on their driving experiences would be limited, within the confines of a research facility and a traditional moderator.

To understand their recklessness on the road, a different exercise was needed to encourage drivers to open up: ask the audience to research themselves.

They filmed themselves driving, talking with their friends about driving, and their friends and girlfriends talking about their driving. Inevitably they didn’t think about the fact they were recording their thoughts and experiences and revealed everything.

And within this piece of work, there was a distinct difference in the attitudes and feelings of a subset of our audience: the new drivers, men who had passed their test within the last year. They were nervous.

Of course, they were over-excited and full of bravado, to some degree. But they were nervous. They believed that passing the test didn’t actually equip you to be a good driver and that there were still certain situations and manoeuvres which they weren’t confident in executing.

We called the two-sides of our audiences’ feelings about driving, after recently passing their tests, the New Driver Paradox. They were, of course, excited and elated about passing, and keen to drive a lot and use their skills, but they also knew they were not experienced drivers, and so felt some nervousness about particular manoeuvres and situations. The crux was that new drivers knew they still had a lot to learn.

But we also knew that we couldn’t just tell them to slow down or offer up tips in an authoritative way. We’d have to help them understand more about their driving and find ways to make it easier and safer without seeming as though we were telling them what to do.

We were looking for a vehicle or a person who could impart wisdom in a way that would mean our audience would listen to and absorb it.

A figure so far removed from their worlds and their lives that he could appear in the backs of cars, and on their mobiles to give them bits of information and tips to help make their driving safer, without them being aware that this was what was happening.

The Road Whisperer is a laid-back American character, old enough to have done a lot of driving and to have seen a lot of the world.

He is born of a slice of American culture; older, cool, sure of himself, laid back, doesn’t take himself too seriously. He appears when you need him and can help with some of those tricky driving situations like which lane to take at roundabouts and how to tackle driving at night.

And of course, the channels we use him in are right where our new drivers are, on their mobile phones, in VOD and cinema. He appears in GIFs too in the visual formats our audience are used to and use daily. 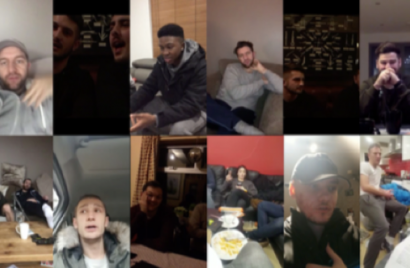 Sophie is the CSO of VMLY&R and works across the portfolio of Client Partners to leverage the agency’s unique brand advertising and brand experience expertise. She was previously Head of Planning at Iris and one of the 2014 winners of the IPA’s Women of Tomorrow. With a career spanning more than 20 years in the industry, Sophie’s experience ranges from large global networks to independent creative agencies. She has worked at BBH, Mother, JWT, and AMV BBDO, across a number of the industry’s most high-profile campaigns including Boot’s ‘Here come the Girls’, Sainsbury’s ‘Christmas in a Day’ and Libresse’s ‘No Blood’.