Should brands be signing up to Veganuary?

Earlier this week I desperately tried to eavesdrop as three workmen discussed Greggs’ latest creation: the vegan sausage roll. I never did find out what they thought but I did, unfortunately, see Piers Morgan’s faux vomit when he sampled the roll on Good Morning Britain.

Earlier this week I desperately tried to eavesdrop as three workmen discussed Greggs’ latest creation: the vegan sausage roll. I never did find out what they thought but I did, unfortunately, see Piers Morgan’s faux vomit when he sampled the roll on Good Morning Britain.

Whether knowingly or not, Morgan did more for the brand in those few minutes than many an ad could have. His outrage, going hand in hand with his social profile, positioned Greggs within our collective cultural consciousness. Indeed, Morgan’s original Tweet, “Nobody was waiting for a vegan bloody sausage, you PC-ravaged clowns” opened up a space for Greggs to respond. And respond they did as they announced, “Oh hello Piers, we’ve been expecting you”.

Five years ago, the charity Veganuary was founded to inspire more people to try veganism both in the first month of the year and as a lifestyle choice. But it’s only in the last few years that it has crept more into wider public consciousness and subsequently onto brand’s agendas. This year, the charity has seen people signing up in record numbers, at one point every 3.5 seconds. Even Gordon Ramsey’s giving it a go.

Waitrose & Partners' annual Food and Drink Report for 2018 revealed that 1/3 UK consumers have deliberately reduced the amount of meat they eat, or have removed it entirely, while 1 in 8 Britons are veggie or vegan. A further 21% would describe themselves as flexitarian, a diet that is plant-based with the odd bit of meat thrown in.

A BBC news article recently revealed that the number one resolution we should all be making for 2019 is to eat less meat, while the Green Party wants to impose a tax on meat to lessen the impact on the environment.

Once labelled as a choice solely for either the affluent or the hippie, veganism wasn’t something that most of the general public would have really considered. But this is no longer the case. The market is estimated to be worth more than £572 million in the U.K, according to the market research company, Mintel and this is something brands cannot ignore.

950
stores you can buy the vegan sausage roll in

5 million
views of the launch video

As the UK's biggest bakery chain, Greggs currently sells around 1.5 million sausage rolls per week. Yes, every, single, week. In early 2018, a nationwide petition launched by PETA challenged the chain to introduce a vegan equivalent.

Fast forward to the start of this year and, in a launch campaign video created by Splendid Communications with PR from Havas in Manchester, the Greggs vegan sausage roll was unveiled to the world.

Designed to look like an Apple product release, the spoof launch video came complete with dark ombre backdrop, intense cinematic music and handy signage. It signalled the launch as "next-generation" and allowed the brand to maintain its dry, mischievous tone of voice.

The vegan sausage roll is made up of a "bespoke" Quorn filling, vegetable oil and 96 layers of animal-free puff pastry.

While naturally these products aim to widen the choice for people who are already vegan or vegetarian, the vegan sausage roll’s introduction into around 900 stores around the country will help to expand the bakery's existing customer base. It also helps serve as a nod of encouragement to those meat eaters perhaps willing to incorporate more meat-free options into their diet.

The launch video has to date received around 1.2 million views on Facebook, with over 4.86 million views on Twitter alone, leaving people so desperate to try the sausage roll that the bakery is having trouble keeping it in stock. 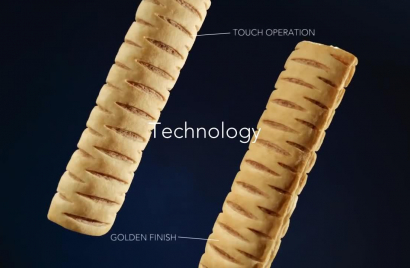 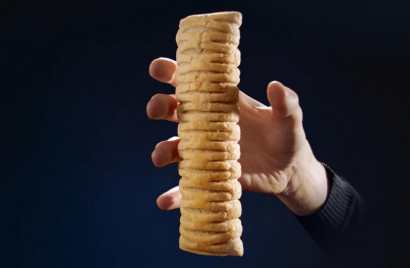 A new plant-based range from M&S

Everyone's favourite go-to for a posh lunchtime sandwich, M&S recently launched Plant Kitchen, a collection of more than 60 meat and dairy-free plant-based meals, salads and snacks. With packaging created by Coley Porter Bell, the range has been designed to resemble gourmet street food, with vibrant colours and a modern typeface. The Instagram-friendly range opens up M&S's offering to appeal to a broader base of lunchtime goers. Plant Kitchen meals are also the first from M&S to use widely recyclable trays as well as foil trays and cardboard boxes. 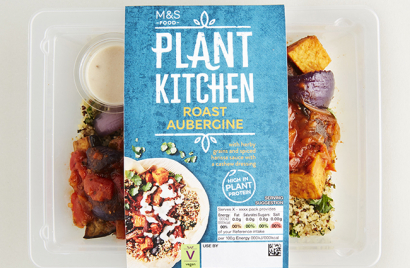 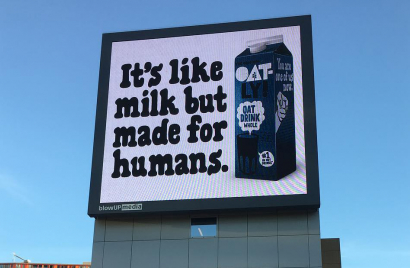 After a controversial run in Sweden which saw them sued by the country's dairy industry, Oatly's campaign 'It's like milk but for humans' landed in the UK. The OOH campaign stretched across the walls of many of London's busiest underground stations, from King's Cross to Oxford Circus, Peckham and Brixton. There was also supporting work in print media, podcast sponsorship and VOD. The campaign, highlighting the fact that Oatly makes its milk-like product from oats, aims to encourage consumers to switch from animal-made products to a plant-based alternative.

McDonald's switches up its Happy Meal

For the first time in the brand's history, McDonald's has introduced a vegetarian Happy Meal. The wrap, which is also dairy-free, contains a red pesto goujon, tomato ketchup and shredded lettuce. The new product highlights the importance of introducing a greater variety of dietary options for children as well as adults. The Happy Meal comes as McDonald's also launches its new Spicy Veggie Wrap on the main menu. 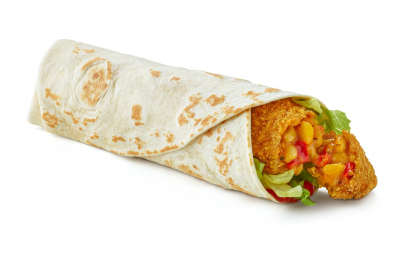