A new campaign from ENGINE raises awareness of coercive control at a crucial time. 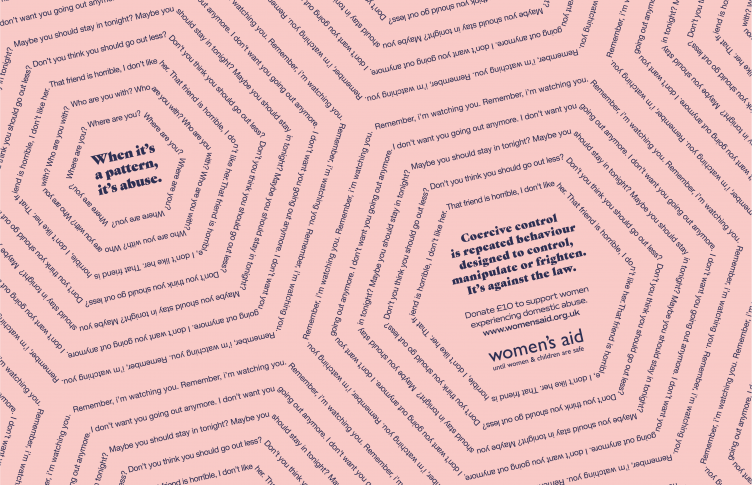 Women’s Aid has launched an arresting press ad in Vanity Fair to raise awareness of coercive control. The work conceals a hidden message of abusive behaviour within a beautiful pattern, highlighting how coercive control is designed to control, manipulate or frighten another.

At a time when it is increasingly difficult to be shocked, the fact that domestic violence and coercive control will increase in the wake of the coronovirus crisis is a uniquely cruel statistic. According to Women’s Aid, the government's advice on self or household isolation will have a direct impact women and children experiencing domestic abuse. Social distancing and self-isolation can be used as a tool of coercive control by perpetrators.

In the wake of this, ENGINE have launched a new press campaign that raises awareness of coercive control. The beautifully designed graphic ad, which will run in Vanity Fair, gives a gentle touch to the body blow of pitch perfect copywriting which brings the menacing form of abuse to life. The hidden message of abuse housed within the beautiful pattern, tells a series of questions that form a pattern of abuse leading to a grim conclusion.

Faye Connelly, Fundraising Manager at Women’s Aid, said, “During these uncertain times and under current guidance, we know that a lot of women will have to spend more time indoors. We are thinking of all those for whom home is not a safe place but one of fear and control. For women experiencing domestic abuse, the workplace is often an escape and they will need our services more than ever. You can help us support those reaching out by donating to our urgent appeal today: www.womensaid.org.uk/urgent-appeal.”

Chris Ringsell, Creative Director at ENGINE, added, “In this difficult time awareness of the work Women’s Aid do is even more crucial, especially as some people will now be forced into isolation with their abusers. What a terrifying thought.”

The agency has taken this terrifying thought and translated into a powerful campaign to break the silence by highlighting the fact that coercive control is hidden in plain sight.

However coercive control is still yet to be fully recognised and understood, a fact which makes this campaign all the more necessary. It is vital that the justice system and wider society recognises that abuse is a pattern of behaviour that restricts a woman’s freedom over time, not just single incidents or physical assaults.

This ad aims to explain coercive control in a clear and memorable way, and to encourage donations in support of the brilliant work that Women’s Aid do in helping domestic abuse survivors.

In the midst of the global pandemic, it is vital that Women’s Aid has enough funding to carry out its life saving work. This beautifully designed work is a compelling reminder of the power of creativity in crisis. Hoarding toilet roll might dominate the news coverage, but as this campaign so powerfully communicates, domestic abuse is still happening in plain sight.

‘The Pattern of Abuse’ will run in the March 2020 issue of Vanity Fair, in a donation of media supplied by Condé Nast, and is on sale from the 20th March.

How the NABS team are choosing change in 2022

The Case For Creative Optimism

Diversity is becoming increasingly integrated into the creative process, a shift which is driving change across the industry.

A rape alarm: For working late, client dinners and Cannes

McDonald’s and Leo Burnett showcase the Saver Menu for January