How a pair of creatives called time on toxic gossip magazines

Ads Dechaud and Phil Le Brun, a creative duo at Wonderhood Studios teamed up with Visual Diet to create a campaign to highlight the toxicity at the heart of the gossip-driven media.

There are few things that reflect the fundamental cultural shift afoot more than the revolution in consumer attitudes to gossip magazines and tabloid newspapers. Headlines and attitudes that were once part of the fabric of our media ecosystem have fast become out of step with consumers’ values.

The garish headlines that shout out from the magazine racks belong to a different time. Body shaming, misogynistic, poisonous rhetoric glares out from the front covers. But the truth is today they are still the norm, part of our daily visual intake that make up the exhaust fumes of simply living, particularly as a woman.

But for many, these magazines are just the tip of the iceberg; the media perpetuating a tone of conversation that carries through into society. This level of toxicity was something that a creative duo from Wonderhood Studios set out to highlight through a powerful campaign mimicking an already familiar format, that of the warnings adorning cigarette packets.

Ads Dechaud and Phil Le Brun believed that it was important that their campaign “borrow[ed] the same semiotics”, as Dechaud puts it, when it came to their creative. People are used to seeing warnings on cigarette packets so the pair knew it would help them by creating something recognisable. Dechaud adds, “Everyone knows how harmful cigarettes can be, but those magazines are as harmful for mental health.”

While we may be used to seeing the cigarette warnings, most people who smoke simply turn the packet the other way up as they carry on smoking. It’s a seemingly bizarre but very human mentality but it’s the same with the gossip magazines. You know that you don’t really want to look at them but it’s a guilty pleasure; you know it’s bad for you, but you still want to consume it. Le Brun explains, “Borrowing [the cigarette warnings] just makes a lot of sense.”

Everyone knows how harmful cigarettes can be, but those magazines are as harmful for mental health.

The growth of social media’s call out culture

The growth of social media has also heralded the rise of call out culture; individuals aren’t afraid to call out publications and companies who they aren’t happy with. This has stretched to some consumers highlighting the magazines and online platforms whose content they feel is damaging. And, as Le Brun adds, “the power of social media in calling stuff out does have impact.”

In the wake of Caroline Flack’s death, the emergence of the call for greater regulation through ‘Caroline’s Law’ means that cracking down on damaging media narratives is at the top of the agenda. Le Brun points to the impact each individual can have in pushing for progress. He explains, “There is definitely power in social media, in normal people putting their hand up and going this isn’t right, this isn’t moral; this isn’t the right way to do journalism and things have to change.”

The change he seeks is using social media for good, to realign the focus of what these magazines publish. Le Brun adds, “Maybe those magazines still exist, but it’s shifting their focus. That’s the shift we’re trying to make away from just breeding this negativity, shifting to something that feels more responsible and positive.”

In our always-on modern culture, there is an inherent, and more often unhealthy, fascination with the lives of celebrities; through social media you feel like you’re directly involved with their day to day existence. But the question remains, can kindness sell as well as the toxic gossip can? For Marine Tanguy, Founder of MT Art and Co-Founder of Visual Diet, the answer is yes, of course it can. She explains, “It is reframing what success looks like and if we start empowering people who represent a different type of success.”

Dechaud references the behaviour of musician Billie Eilish as indicative of the definitive shift taking place. Eilish is open about not wanting to be sexualised and about using her social channels to champion others and spread kindness. Dechaud believes that we’ve simply inherited a notion of what success looks like from previous generations but that it will be the next generation who bring about change. She adds, “We have to help people to relearn how to communicate and see success.”

There is definitely power in social media, in normal people putting their hand up and going this isn’t right.

Stepping up, as brands & individuals

The team realised quite quickly that they had unwittingly created a resource that would empower other people to get involved. Le Brun talks about when the mental health advocate and author Matt Haig shared the campaign on his Instagram page. He explains, “In the comments section below, people were like where can we get our hands on this stuff?” People wanted to do it themselves; they “wanted to feel involved and do something that feels positive,” Le Brun explains. He adds that the campaign was never “just about us; it’s about people empowering themselves.”

The campaign is so powerful as it sends out a message that individuals can play a role in creating change. The team is also keen to emphasise the fact that brands too can make the change, especially since a number of them, believes Le Brun, have a level of authenticity in-built into their DNA. He explains, “It has to feel genuine. If they can be genuinely responsible and be thought leaders in a positive way, then they should do it.”

The team is keen to emphasise that brands can have the capacity to change, citing Barbie’s recent evolution as an example of a brand adapting to the current landscape rather than sticking firmly in the past.

Barbie was, Le Brun says, the “worst example of perpetuating a stereotype that women have to look a certain way.” But the brand is also a good example of how much a brand can change, and how that change can have a significant positive impact on the business’s bottom line: “They’ve shifted to something that feels far more positive and inclusive.” He adds, “If Barbie can change and it feels real and genuine and sustained…then why can’t these publications change as well?”

For Tanguy, spearheading this change comes down to education first. She explains, “I think it’s difficult to change old patterns once you’re a grown-up adult.”

Le Brun believes that while you can’t take away people’s free will, you can share information with them and help them educate themselves; you can “understand the impact of what you’re perpetuating”, he adds. Dechaud uses the example of smoking as a parallel for the consumption of gossip magazines: “You can’t stop people from smoking, but you can tell them it is toxic for you. And then it comes down to your own choice.”

Le Brun acknowledges the complexity of trying to change a visual and cultural landscape. But, he highlights, it’s more about raising awareness to kickstart conversations that might lead to change further down the line: “It’s not just a simple solution, we get that. This is just trying to push the needle.”

A more mindful way of consuming stuff is to actually seek out things which are wholesome, good or empowering.

Le Brun believes that the landscape is decidedly shifting away from negativity; people have had enough. “A more mindful way of consuming stuff is to actually seek out things which are wholesome, good or empowering,” he adds.

It is a difficult thing, however, to navigate the internet and consume content that is just positive; the negativity abounds and is impossible to ignore. We live in a culture both on and offline where opinions are often polarised. As Dechaud explains, “I think social media has done this. It made everyone think they have to have an opinion,” when sometimes, she believes, if you don’t know enough you should just keep quiet. For Le Brun, he acknowledges that social media is “a double-edged sword”, one that people need to be careful how they handle.

The pair’s advice is to be aware. Pay attention to the positive and try to filter out the negative. Their campaign calls out toxicity, something they believe both individuals and businesses have a responsibility to address. 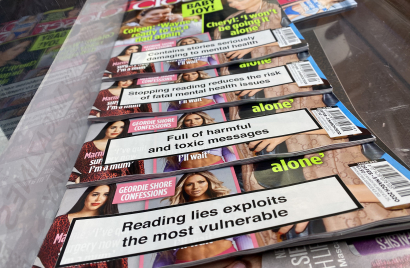 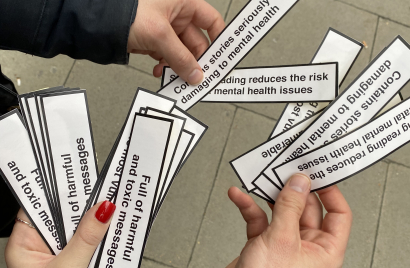 Richard Denney, Executive Creative Director at St Luke’s, lifts the lid on why the agency reversed the NHS logo to urge the public to Stay Home Now.

A team of volunteers, and MullenLowe UK have created a global campaign to encourage people to stay at home amidst the coronavirus crisis.