Together we will never lose

In the wake of England’s defeat and the racist abuse aimed at players Marcus Rashford, Bukayo Saka and Jadon Sancho, the ugly side of the beautiful game has become increasingly difficult to ignore.

The racist abuse received by players in the aftermath of the match on social media has rightly prompted a public outcry; one that has been heard and reflected by ITV in its latest campaign.

Created by Uncommon Creative Studio, the ad pictures the England players taking the knee and the strapline: “Together we never lose. ITV stand with England.” The campaign follows in the footsteps of the bold campaign the broadcaster ran last year in support of dance group Diversity’s Black Lives Matter themed performance on Britain’s Got Talent.

This racist abuse suffered by the players has also been called out by EE as part of the groundbreaking #HopeUnited campaign, created by Saatchi & Saatchi,  designed to challenge online hate.

In a social post EE noted: “They have inspired us, played their part in taking us to the final and stepped up when their country needed them most. They deserve our admiration not hate. We proudly stand with these brave lions.” #SayNoToRacism

England manager Gareth Southgate, wrote movingly in The Players Tribune, highlighting the abuse that Black players get on social media, writing: “Why would you want to choose to abuse somebody for something as ridiculous as the colour of their skin?”

He continued: “Unfortunately for those people that engage in that kind of behaviour, I have some bad news. You’re on the losing side. It’s clear to me that we are heading for a much more tolerant and understanding society, and I know our lads will be a big part of that. It might not feel like it at times, but it’s true. The awareness around inequality and the discussions on race have gone to a different level in the last 12 months alone. I am confident that young kids of today will grow up baffled by old attitudes and ways of thinking.”

Of course awareness alone is not enough to turn the tide; yet these campaigns remain a powerful and much-needed message. 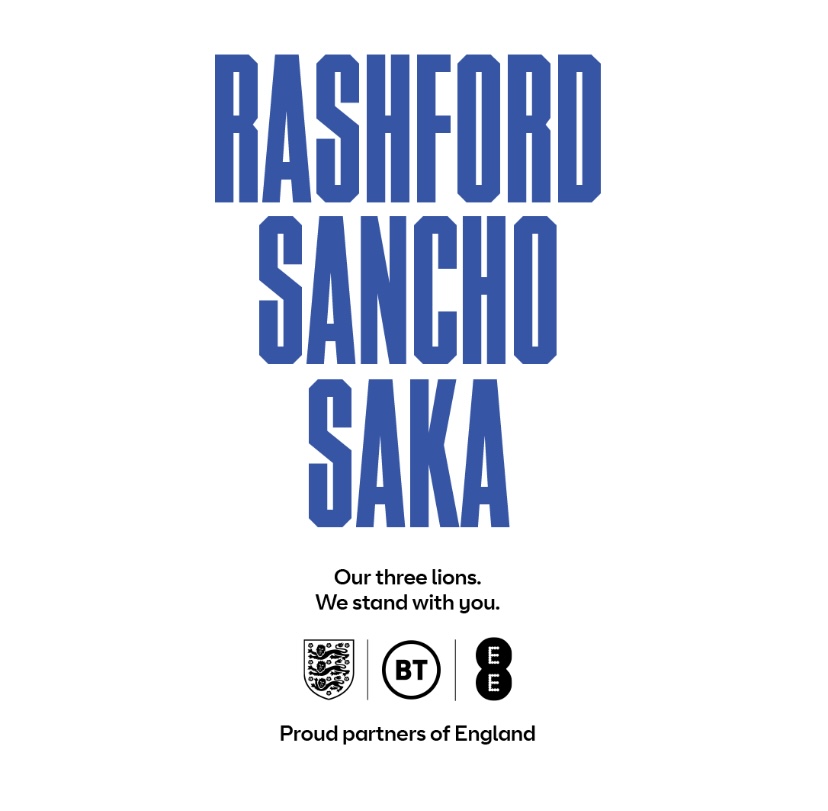 Not Model’s Own illustrates the sinister realities of coercive control

Sheridan&Co is launching a series of collaborations which underline the importance of personal space in the wake of the pandemic.

How brand and athletes’ made Tokyo the mother of all games

The Olympics might be over, but the marketing lessons are here to stay.

To mark its one year anniversary, Ad Net Zero will be holding a 2-day global summit coinciding with COP26 to accelerate the ad-industry toward to net-zero by 2030