“Being comfortable is owning who we are”

How Hotter and Pablo London smashed stereotypes to raise the bar in marketing to older women.

Imagine what would happen if brands took older women seriously in advertising? The new campaign from Hotter, the largest shoe manufacturer in the UK, answers this question with creative flair. Its brand defining campaign invites women of all ages to be comfortable in who they are by reflecting the lived experience of women across generations, casually smashing stereotypes in its stride.

Created by Pablo, the Autumn Winter 2020 campaign is a step-change in approach for the brand and follows the agency’s appointment in January this year. Claire Reynolds, Head of Brand and Strategy at Hotter, says the campaign follows a larger repositioning project for the brand, which has reinvigorated the brand, product, communications and experience. She credits Pablo for delivering a concept which “asks us to rethink stereotypes, rethink comfort and rethink Hotter.”

We wanted to make the ad that was missing from our TVs.

“We wanted to make the ad that was missing from our TVs. It was no more complicated than that,” explains Nathalie Gordon, Creative Director at Pablo. However, she notes that writing it on the other hand was more difficult. As she explains: “We found ourselves playing into the very stereotypes and clichés we wanted to avoid. But in that lay an idea: why are women seen in such a binary way? Young is this, old is that. There’s ultimately only a difference between a woman of one age versus another if we choose to see it. And therein lay the ad.”

The power of this campaign is in its casting, achieving what relatively few adverts do in the depiction of ‘real women’, without ‘real women’ being a marketing gimmick, or an ironed-out and polished version of what a ‘real women’ should be.

The talent was street-cast by Road Casting and were chosen to embody the scenes of the film. It is in essence an approach rooted in celebrating real life people being their true authentic selves. From the mental health campaigner using weightlifting to help combat her challenges to a political activist and a pregnant woman, all are cast for who they are, not what stereotype they represent.

Gordon explains: “We also knew that the words would have far less meaning if the talent in the ad didn’t live and breathe it, if they themselves we’re sticking two fingers up to stereotypes themselves. Road Casting smashed the casting out the park and thanks to them we didn’t having anyone ‘acting’. The women we had on screen we’re being themselves and that to us was the icing on the cake in terms of truly, authentically showing women as they are rather than as society presents them.”

The campaign includes three different mothers and daughters who add depth and tone both in front of and behind the lens, notably director Phoebe Arnstein and her mother, actress Amanda Burton, who is the film’s narrator. The Executive Creative Director for the campaign was Dan Watts and Nathalie Gordon and Cathy Hutton were the Creative Directors.

Historically the advertising industry has catastrophically failed to take older women seriously in advertising despite their phenomenal purchasing power. This campaign suggests that perhaps the industry is finally reaching a tipping point. Joan Devereux, Planning Director at Pablo, believes so. She explains: “This is an issue that has been discussed regularly in the past but has failed to lead to any real change. Now, however, we seem to have reached a critical mass in the push-back from women themselves, a refusal to go away quietly or retreat to the side-lines.” She points to initiatives such as Vogue’s The Non Issue, the arrival of women over 50 on the catwalks at London Fashion Week as well as the determination of high profile women to speak out on the issue. She believes ageism is on the agenda and momentum is building. “There’s no stopping us,” she adds.

As Next Chief Executive Simon Wolfson quipped back at the beginning of lockdown, “No-one wants to buy clothes to sit at home in.” Yet as the immediate surge and spend on loungewear demonstrated, consumers did exactly that as comfort and ‘bottom down dressing’ took centre stage. With leading fashion commentators pointing to an ‘existential crisis’ for the fashion industry in the midst of the crisis, questions remain as to the long-term implications not just to the financial fortunes of the industry but to consumers’ aesthetic and ethical choices.

Florence Prevezer, Account Director at Pablo, agrees that during lockdown comfort and feeling comforted was high up on everyone’s agenda. She explains: “Whilst we anticipate that this will continue to be an expectation for consumers, the shift towards comfort-wear is arguably not a new, emerging trend. The category has been fast on the rise in fashion.”

Yet in a world in which women’s clothes routinely fail to include pockets, ‘comfort’ can all-too often become confused with compromise when it comes to fashion. Prevezer explains that for Hotter, especially amongst its older target audience, the brand wants to challenge perceptions of comfort, from being perceived as passive and cosy to a positive, enabling version of comfort. A version that accepts that comfort means different things to different people. She adds: “It’s definitely a long-term shift for the brand, and a vision we’re excited to help shape.”

Devereux adds that being comfortable is a word that is steeped in negative connotations for women, a by-word for giving up. Yet this is a stereotype she sees absolutely no value in, as she explains: “For our customers giving up is the last thing on their mind.  They’re living life at full pelt, starting businesses, getting back on the dating scene, discovering new skills, ramping up their careers, enjoying more choices than ever with the confidence to grab the opportunities that come their way. Comfort for them is not about giving up, it’s about doing exactly what they want.”

Comfort for them is not about giving up, it’s about doing exactly what they want.

The power of this campaign underlines an uncomfortable truth for the advertising industry. The bar for marketing to older women has been set so low in 2020, high-profile brands are still urging women to ‘fight the signs of ageing’ as opposed to reflecting and elevating the lived-experience of older women in advertising. When it comes to ageism in advertising, all too often the industry’s malaise is attributed to the fact it simply holds a mirror up to the stereotypes that already exist. Not only does this approach negate the impact of the advertising industry’s impact on shaping culture, but it ignores the fact this mirror is fundamentally broken.

As editor and author Sam Baker writes so eloquently in The Shift, society at large and the media and advertising industries in particular simply fail to see older women. As she writes: “The advertising industry thinks all women are under 40, in fact make that thin, white able-bodied, cis-gender and straight.” An approach she believes suggests it is an industry not remotely interested in taking your money, noting “what a bank-balance boosting trick it is missing.”

As the fashion and creative industries alike grapple to rebuild in the midst of the crisis, marketers have an opportunity to rebuild from the ground-up when it comes to connecting and reflecting creative firepower. It’s an opportunity to stop urging women to fight the signs of ageing and instead embrace growing old as aspirational, one of life’s greatest privileges rather than something to be afraid of.

“The more this issue is acknowledged and addressed, the more we will see women speak up in support of each other and pushing back on the anachronistic stereotypes and negative tropes of ageing,” explains Devereux. She adds: “There are so many positives associated with growing older that we can and should celebrate; the joy of being comfortable with who we are, increased self-knowledge, self-belief and the wisdom of experience.  What’s not to like?!” As this campaign demonstrates, businesses serious about growth, take older women seriously. 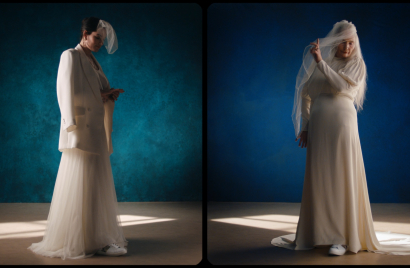 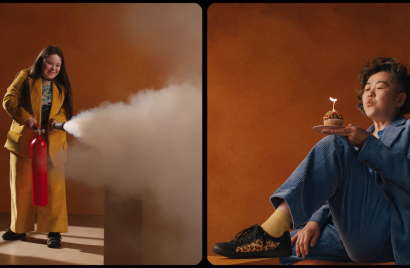