Brands Against Humanity: An expansion pack for a horrible world

Created as an add-on to the not so family favourite Cards Against Humanity, each card highlights a different appalling behaviour enacted by a brand and then provides a way for people to assuage their guilt.

In the modern world, there is nowhere for brands to hide. If your purpose doesn’t align with your business, if you are seemingly talking the talk rather than walking the walk, your behaviour will be called out.

In an extension of this act, creative team Ellie Daghlian and Elisa Czerwenka have designed a new game, Brands Against Humanity, an expansion pack for a horrible world.

Created as an add-on to the not so family favourite Cards Against Humanity and free to print and play, each card highlights a different appalling behaviour enacted by a brand and then provides a way for people to assuage their guilt by donating to a relevant charity.

As the website says, the pack contains “30 horrifying examples of corporate evil, and 30 ways to fight it”, from the now infamous Kendall Jenner Pepsi slot to the lack of bathroom breaks in Amazon warehouses. The game also comes with Corporate Apology Bingo and the rules state that the player who most recently bought bottled water goes first, unless Jeff Bezos is playing, in which case he starts.

Daghlian and Czerwenka said of the game: “As a team we love using really dark humour to make the world a better place, so being able to bring that to life in this project has been so much fun.”

Visit the Brands Against Humanity website to find out more or to suggest your own card ideas. 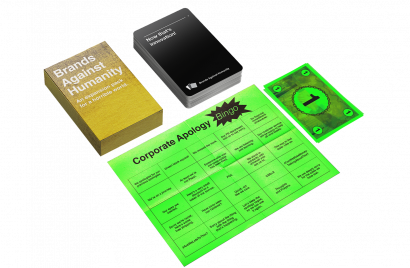 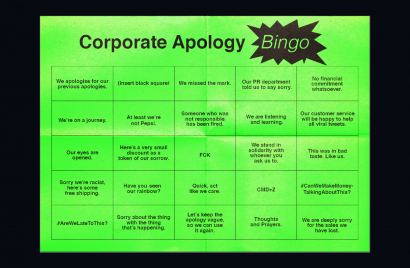 James Hogwood, Creative Director at Livity & Co-Founder of Brand Share the Mic on why the creative industry needs more initiatives to increase the meaningful inclusion of Black talent.

‘The Boob Life’ disrupts the status quo, showing the world just how vital it is to talk about subjects that have historically not been engaged with.

How can brands better capitalise on the growth of DTC routes in the long-term?

The growth of direct-to-consumer routes have created new opportunities for brands but long-term shifts in buying behaviours will be built on more than just necessity.

The dwindling culture of celebrity: Why brands are turning away from big names

Molly Rowan Hamilton, Strategy Director at BrandOpus NY on how celebrities are no longer the only icons of our society. Everyday people are too and increasingly, they call the shots.

Standing out in a sea of blue

Will Thacker, Co-Founder & Creative Director of 20something on a new brand identity the agency created for Seven Clean Seas and the importance of designing to counter to the visual norms.