Turning our appreciation for key workers from claps to fair pay

Clare Duncan, Communications & Marketing Manager at Living Wage Foundation on a new campaign in partnership with Clear Channel to highlight how vital the Living Wage is.

As we enter lockdown 2.0 we must once again rely on the invaluable efforts of essential key worker professions to keep our country going. We count on our delivery drivers to keep food coming to our doors, our care workers to look after elderly and vulnerable relatives and our cleaners to keep essential spaces COVID-secure. Our key workers continue to protect us, but too many are not protected by decent pay.

Public sentiment and appreciation for these key workers was clear throughout the first lockdown, by all of us coming together to celebrate their essential work, clapping every Thursday evening.  However, there’s an uncomfortable reality that isn’t well acknowledged; that at the end of the working day, over a million key workers are still struggling to put food on the table because they don’t earn a wage that reflects what it costs to live.

That’s where the idea for the advertising campaign emerged.

Earning the real Living Wage can be the difference between reading the kids a bedtime story and working late, multiple jobs, each night.

Having come together as part of an established group of Living Wage Employers driven to collectively grow the movement, a natural partnership formed between the Living Wage Foundation, Creature and Clear Channel UK to create an advertising campaign which would evoke empathy with all the people who have been there for us. The campaign gives the public and companies cause to reflect on the hard work of our essential workers, and ends by asking employers to play their part in ensuring their staff can meet their everyday needs, now and in the future, by becoming a Living Wage Employer.

Paying the Living Wage has always been about doing the right thing. The movement first began in East London, when despite working multiple minimum wage jobs, parents found themselves struggling to make ends meet and started a campaign to get their employers to pay a real Living Wage. Since then, the campaign has gained support from successive political figures and thousands of employers.

A key worker who has benefited from the real Living Wage is Andres, a rider for Living Wage Employer, E-Cargobikes.com delivery service in London. He said: “Receiving the Living Wage has been crucial for my well-being and also for my family. In all my previous workplaces I have had to juggle between longer hours and working various jobs in order to cover expenses. Being paid the Living Wage is part of the reason I enjoy working here. I now enjoy more of a healthy balance between work and home life. I can now also afford public transport which is a big deal to me as I commute over two hours a day to get to and back from work."

When standing by values matters most

The hope is this advertising campaign will help move more businesses to accredit, and secure more people like Andres a wage that covers their everyday needs; the weekly shop, an emergency trip to the dentist or a new school uniform. Earning the real Living Wage can be the difference between reading the kids a bedtime story and working late, multiple jobs, each night.

The campaign concludes by asking businesses to join the nearly 7,000 accredited Living Wage Employers who have voluntarily committed to pay all their workers a real Living Wage. These include household names such as Aviva, Everton FC, BrewDog and thousands of smaller businesses. Together, over £1.3 billion pounds has been put back into the pockets of low-income workers.

We of course recognise that it’s been an challenging year for businesses, but it’s in a crisis that standing by our values matters the most. In fact, over 800 employers have accredited since the pandemic began, driven by wanting to do right by workers and their families. With key worker professions in particular, paying a real Living Wage means that these essential employees are free to focus on their vital work, not how they’re going to put food on the table or pay their next bill. What could be more important for the UK than that?

Find out more about becoming a Living Wage Employer 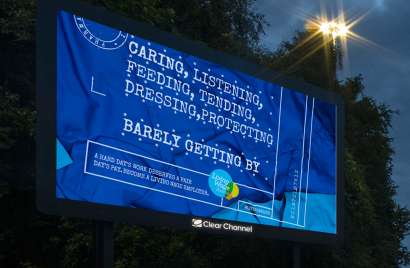 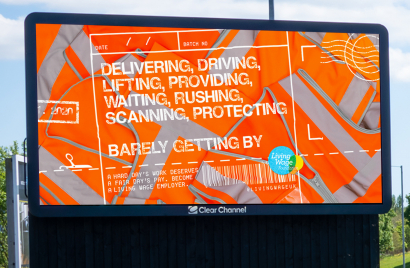 Creating brand awareness and looking beyond 2020

Scott Room, Director of Brand and Digital, Openreach on the power of connectivity and the work Openreach is doing to drive the UK’s digital future and growth.

Not The Year Ahead: There’s no place like home

In the spirit of 2020, and feeling entirely unable to predict what happens next, Alec Samways CEO of Splendid Communications offers up some current observations peppered with hopeful, open-ended vision.

Caffe Nero invites us to ‘eat, drink and be merry’

Despite the challenges of this year, Caffe Nero reminds us that life is a little sweeter when you can draw a little joy from the smaller things in life.

The gift that keeps on giving: How everywhere commerce is fuelling holiday shopping and beyond

Julia Fontaine, SVP Growth at MediaMonks London on the new user behaviours suggesting a shift in shopping mindset and how brands can connect with audiences through differentiated digital experiences.

What next for the creative industry? Creative growth through agile thinking and soulful tech

Nicky Badenoch, Co-Founder and CMO of GENIE on why businesses should be using respectful technology to supercharge their talent networks.