We speak to three young Londoners about their involvement with the non-profit initiative Create Not Hate, the ideas behind their work and what creativity really means to them.

There can be no doubt that this year will go down in history as one of seismic change. Not just because of the global pandemic, but also because of the conversations that have surfaced thanks to global protests around the Black Lives Matter movement. Suddenly businesses and individuals are talking about racism and racial profiling with the express desire to do something about it.

This is something that the young Londoners involved in the Create Not Hate programme set out to capture in the creative work they have produced, including films, posters and T-shirts. The creatives, aged between 13 and 22 years-old, draw from their own first-hand experiences of what it is to move through the city as part of an under-represented community. While some have chosen to frame it through a more light-hearted lens, others use the power of words.

Create Not Hate is the non-profit initiative founded by Trevor Robinson OBE and Quiet Storm to create a gateway into the creative industries for young people of colour. Robinson believes that, “we’ve got to be clever about how we get the talent in.” To boost diversity and inclusion, Robinson feels that the marketing industry “really needs to throw the net out.”

As Jennelle Gregg-Fuller, a 16-year-old student from Masbro Youth Club who took part in the programme said: “When you’re able to step outside the box, ignoring fear and doubt, that’s when the real originality, creativity and authenticity shines through.”

Here we speak to three young Londoners about their involvement with Create Not Hate, the ideas behind their work and what creativity really means to them.

Creativity to me means the ability to express yourself.

Can you talk a little about your involvement with the Create Not Hate programme?

My involvement with Quiet Storm was so inclusive I felt like I was a member of their office. They involved me in so many decisions and ensured my voice and creative vision was catered to. The way it came about was so seamless and I think that made it a bit more natural because it didn’t feel like school or something forced; it felt like something I could do that would mean I’m expressing myself.

The idea behind the work I created was around perceptions, how people naturally put others in boxes. Of course, it is a natural thing to do but some part of me always wanted to scream out, I’m smarter than your son, when people would look at me funny for the way I dress or how I spoke.

With perceptions and stereotypes being things that affected and will continue to affect my life, I also wanted to come up with something more light hearted to the other things I had come across because, although usually effective, they can sometimes fall on deaf ears. That’s why my work was more of an easy-going short scene that made you think and feel slightly embarrassed but nothing too serious. Honestly, it felt surreal, like a dream come true, I’m only coming to terms with the fact that professionals all liked my idea so much. They treated me and my idea like a professional short film.

Creativity to me means the ability to express yourself. I think if people didn’t get to express themselves or if they couldn’t make somebody think, they wouldn’t enjoy it nearly as much. 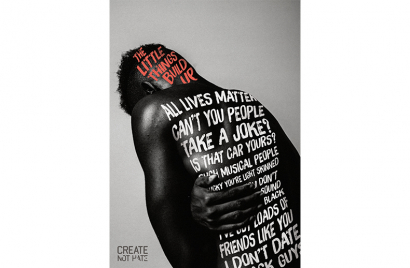 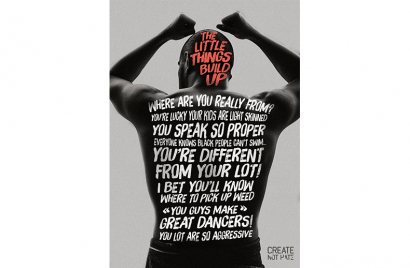 When you’re able to step outside the box, ignoring fear and doubt, that’s when the real originality, creativity and authenticity shines through.

Can you talk a little about your involvement with the Create Not Hate programme?

I am a part of a local youth club called Masbro Youth Club, which is run by Eamonn O’keefee. He worked really hard in order to get in contact with the Create Not Hate program as they were also looking for young people to participate in their programme. Trevor Robinson OBE Founder of Create Not Hate, and his team came into our youth club to tell us a bit more about their programme and their goals that they wanted to achieve with us. The aim was to come up with ways to spread awareness about the lack of diversity and tackle racism within many institutions and industries such as the media industry, higher education i.e. university lecturers, healthcare, the justice system etc. We started to work with them and explore ideas and many of us came up with different things. For example, using a short film, making t-shirts or posters.

The work that my group put together was given the title ‘The little things that build up.’ This idea focuses on the micro aggressions and gaslighting towards black people and people of colour, within the UK especially. We decided to put this idea in the form of posters. Other groups made t-shirts and directed short films that were fortunately able to be aired on ITV London News during an event that took place at the Electric Cinema in Notting Hill, where each group was able to showcase their work. Watching my idea being brought to light was very surreal and really encouraging as it finally gave myself and many other young people the opportunity to express ourselves and have a voice about important issues in the world. I can truly say this opportunity was a dream come true!

To me, creativity means allowing your imagination to run wild and free with no limitations. I believe when you’re able to step outside the box, ignoring fear and doubt, that’s when the real originality, creativity and authenticity shines through. 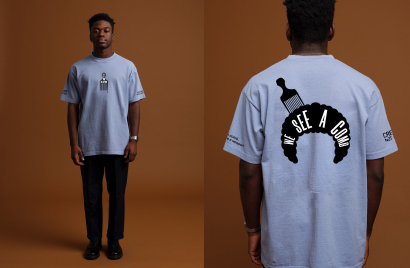 We have a voice for a reason and we really need to use it.

I came up with a t-shirt design on stop and search in the UK and the racism that’s been going on during this past couple of months. I got my ideas down quickly. It was really easy for me because an incident happened to me and it gave me the idea of looking at perception. The t-shirt idea is a man in a suit and a durag. It shows that anyone can wear a durag, it doesn’t matter it’s just a piece of clothing, and the perception behind it as well. I was stopped and searched on my way home, and I felt because I was wearing a durag the perception behind it, being a young black man in the UK, really made me look like a bad person. It increases your chances of being stopped and searched and it’s really sad that happens, but it happens. It shouldn’t be accepted.

The idea came from that. I really wanted to get my thoughts down and get this t-shirt done. After a few sessions with Quiet Storm I was able to work with two designers and they incorporated what I wanted into it. I wanted the word perception echoing round a man in a suit with a durag on. It was really good to see it come to life. It was everything I wanted to see.

The idea of creativity to me is expressing yourself and getting your ideas down. I’m not the best at drawing, but as long as I got my ideas down on paper it helped me to express myself. We have a voice for a reason and we really need to use it. Working with Quiet Storm helped me get my point across and the message behind my idea and I want to thank Quiet Storm and Create Not Hate for giving me a voice. For giving me an even better voice. I feel more confident and at ease expressing my ideas. It’s really helped me.

Create Not Hate needs agencies, media owners, brand owners, production companies and people in all facets of the creative sector to sign up and offer either their time, creativity, donations or resources. Any person or company that wants to get involved is asked to contact info@createnothate.org or donate directly here.

Where does Blue Monday stand after a blue year?

Wunderman Thompson’s Senior Analyst Robyn D’Arcy analyses the year’s ‘most depressing’ day and its role in 2021.

Virtual lessons from an Ethiopian community

WaterAid have created a new series, Learn with Frat, that sees an Ethiopian community sharing their virtual one-minute lessons.

The evolution of relationships in a brave new virtual world

Kim Walker, Chairman of Aprais on the importance of maintaining and building better client agency relationships in a virtual working world.

Rest up and power forward

Nina Stephenson-Camps offers some hints and tips about how you can pause, reflect and integrate growth into your daily life.

Aaron McFeely, Lead Strategist at Space on how a return to authenticity is the key ingredient to the survival of influencer marketing, something that brands should both value and seek out.