A new campaign to encourage consumers to support local businesses shines a light on the opportunity to shift consumption habits in the wake of the crisis.

Baking sourdough, cutting hair, embarking on at-home exercise routines in your pants; lockdown has been a reminder for many people as to just how much we need the expertise of local businesses. Yet research from YouGov shows that 76% of small businesses have been negatively affected by Coronavirus. While research from banking app Tide showed that 19% of SME’s have cash reserves that will last for just three weeks or less.

Lockdown has had a devastating impact on many local businesses who have been forced to close. Yet, where possible many are successfully pivoting to home delivery, whilst also supporting vulnerable people and raising funds for the NHS.

In a bid to support and recognise the importance of local businesses a team of creatives from Pablo, Nathalie Gordon, Amy Fasey, Jacob Hellestrom and Dan Watts, have launched a pro-bono outdoor campaign. The team have created 16 posters in multiple formats which support a wide variety of local business from hairdressers to gyms and furniture shops. The campaign embraces the #SupportLocal hashtag. London Lites has already picked up the campaign which is running on 16 poster sites across the UK and the team are looking to expand the activity further.

Buying from independent businesses is good for communities and good for the economy. It's a double whammy of good.

Stepping up to support local businesses

Nathalie Gordon, one of the creatives behind the campaign, says that seeing the struggles of small businesses first-hand has inspired the work. She explains, “This pandemic has brought many to their knees and will continue to do so for months to come.”

“Small businesses and local independent shops have never been more important but yet it’s the big corporations getting bailouts and making headline news. The focus is in the wrong place. Buying from independent businesses is good for communities and good for the economy. It's a double whammy of good,” she continues.

For Jacob Hellestrom, the aim of the campaign is clear: “The truth is unfortunately, if we don't support small businesses, in a few months they might be gone. It's on all of us to.” 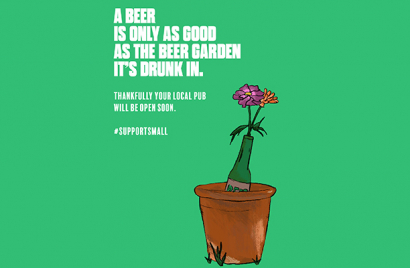 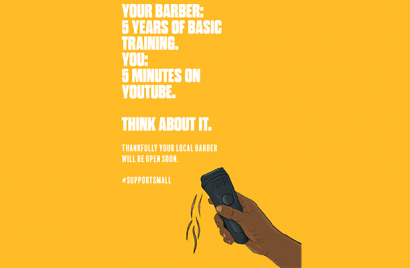 As the government messaging shifts from ‘stay home’ to ‘stay alert’, people who cannot work from home are being encouraged back into their workplaces. With staggered working hours, and different patterns and commuting habits coming into play, consumers have the opportunity to make different buying decisions.

As the playful campaign reminds us, as lockdown begins to ease people have the chance to stop cutting their own hair or baking their own sourdough or exercising in their pants. “We wanted to remind people of the local businesses they must now support, instead of keeping their new, often odd, lockdown habits,” adds Gordon.

According to Gordon the target audience for the campaign is broad, namely “anyone with any disposable income moving forward.” She explains: “We get that financially some people are on the floor. Not everyone will be able to shop local but one of the most important things that will help the economy moving forward is spending. And your money is better spent in your local organic shop than at Tesco.”

The team has been mindful of the fact that many people currently have little to no spending power, which means they haven’t been too superfluous in their approach.

I do think it takes a conscious, concerted effort. You have to say to yourself 'I am going to shop local' and then get to know your neighbours.

As consumers face the possibility of life post-lockdown the team believes they have the opportunity to make more mindful decisions about how they shop. As Amy Fasey, a creative behind the campaign explains, “It shouldn't do but I do think it takes a conscious, concerted effort. You have to say to yourself 'I am going to shop local' and then get to know your neighbours.”

She believes this shift demands shopping in a way which doesn’t always put convenience first. She says, “So instead of saying I'll buy that book at Amazon because it's easy, you already know that you can buy it from the bookshop down the road and they are doing deliveries on bike.”

Fasey adds, “[Shopping local is] not always the easy option and often not the cheapest but it's always the most rewarding and best for our communities and in the long run, our high-streets.”

“If one person sees one of these ads and heads to their local bookshop instead of the monolith that is Amazon, we've in theory done our job,” adds Gordon. 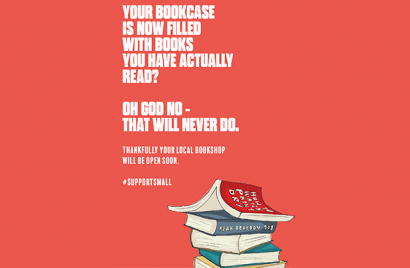 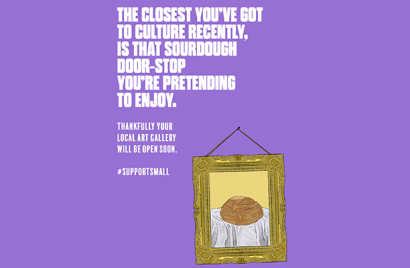 As the UK makes tentative and at times confusing steps towards easing lockdown, a change in tone in marketing messaging is perhaps overdue. Gordon believes that marketers need to evolve. She explains, “A lot of creatives I know are commenting on how we're playing ad-bingo because all the ads now look and sound the same. Lockdown has been a rollercoaster; messages that worked a month ago aren't applicable now. What was important then, may be less so.”

Fasey adds that this was part of the reason the team started exploring doing something to promote small businesses. “Because no-one else is and supporting them is going to be a huge part of helping push the economy forward,” she adds.

Zoom is where creativity goes to die

Notably the team behind this campaign also successfully delivered the ‘Stay Home' campaign across the UK, a message which was so successful The Times newspaper mistakenly reported it was a government campaign. So, what have they learned from creating these campaigns and getting them live across the UK in lockdown? “That Zoom is where creativity, and many ads, go to die,” quips Gordon.

“I think WhatsApp feels like a more natural, organic way of working. Bit more conversational and less formal,” adds Gordon. Unlike back-to-back Zoom calls, Gordon notes the app also respects people’s time, an important differentiator considering this campaign was put together in the team’s spare time, rather than being a billable piece of work. “WhatsApp means you can pick it up and put it down,” she adds.

Gordon is clear-sighted on what the team has learned from the campaign. She explains, “Be bold, use colour and do the opposite of what everyone else seems to be doing.” Noting that it now appears that “everyone is doing the same thing”, she underlines the fact that people want clear and concise messaging, while humour or compassion “goes a long way.”

Almost no one can make something happen entirely by themselves.

At a time when many are struggling to get through the day-job, or frankly remember what day it is in the first place, what would be the advice for other creatives as to how to get their ideas into reality? Gordon turns to the iconic Nike slogan: “Just Do It.”

“The four of us are constantly talking about what our next focus could be, what are the issues no-one is dealing with or talking about right now. And it's best idea wins,” she says.

With both this and the 'Stay Home' campaign the team has delivered everything from idea, copy, art direction, media approach and PR. Fasey even created all the illustrations for the campaign herself, after work. “Nothing should stop a good idea and we deliberately choose to execute ours in ways that cost no money,” explains Gordon.

The key was not attempting it all in isolation, as Hellestrom says, “almost no one can make something happen entirely by themselves. Surround yourself with people that want to achieve the same things as you, and who motivate and inspire you.”

Consumers and creatives alike may have tired of trite ‘we are all in it together’ advertising slogans. But the truth is as we navigate this crisis, surrounding yourself with supportive, compassionate colleagues is the best way to create work that counts. As Gordon adds, “Being in this strange time together is how we've got through it as individuals. That extends to creativity as well.” 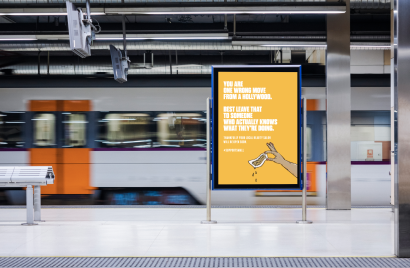 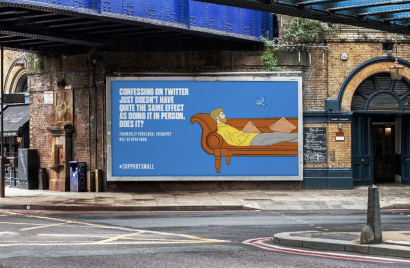 Will coronavirus be the catalyst for greater inclusivity from brands?

Michael Brown, Insight & Cross-Culture Partner at UM believes that the current crisis has given brands an opportunity to reach out to minority groups who have been isolated from the conversation for too long.

The brand’s most recent campaign from AMV BBDO celebrates the moments that make women laugh in spite of the challenges they are facing under lockdown.